Huge news, guys, HUGE NEWS! I’ve booked my first ticket for an actual screening in an actual cinema, praise! With Christopher Nolan’s Tenet set to mark my reintroduction to the wonderful world of the movie theatre on August 26th, we really are in the home straight of my extended home watching experience. There’s been some real highs and some real lows, but I’m hoping to end this crazy time on a positive note. I had the feeling that Babyteeth was going to give me what I wanted.

Set in Australia, Babyteeth tells the story of Milla Finlay (Eliza Scanlen), a cancer battling teenage girl who falls in love with Moses (Toby Wallace), a small time drug dealer/user whose reputation, baggage and older age put the pair at odds with Milla’s worried and protective parents (Essie Davis and Ben Mendelsohn). With a looming sense of time running out and wanting to give Milla as much happiness in her fight as possible, a new family dynamic is established in which ‘optimal’ parenting is overlooked in favour of a different, sometimes interesting, sometimes worrying approach.

The first thing I’ll say is that, thankfully, Babyteeth is definitely no The Fault In Our Stars. The 2014 young adult sensation did absolutely nothing for me, making me cringe more than cry with it’s overly poetic and self indulgent dialogue, and whilst Babyteeth does have its sentimental moments, there is something much more grounded, real, gritty and dark about the events that unfold on screen. This is the kind of film that shows you there is no such thing as a perfect person, or a perfect family, with each character making bad decisions and saying regrettable things at different stages throughout the plot. From the messiness of first love and the way it can blind you to red flags, to the dangers of self medicating (or not medicating at all), to the points of desperation that both cancer sufferers and/or the parents of a cancer sufferer can be pushed to, this film covers so much heavy stuff from start to finish, and the thing that I am most impressed by is how effortlessly light and truly funny it is considering.

I don’t know if it is because Australian humour and British humour share certain sensibilities, but the tone achieved in Babyteeth is one that couldn’t have worked any better for me. The film finds dark humour in the most sombre and melancholy subjects, and it turns a story that on the surface could have been a really depressing slog into something with lots of light and shade. It feels angsty and melodramatic without being eye rolling like so many ‘teens with cancer’ type stories that we have been given in the last few years. Babyteeth is very aptly titled, because it really does have some bite. 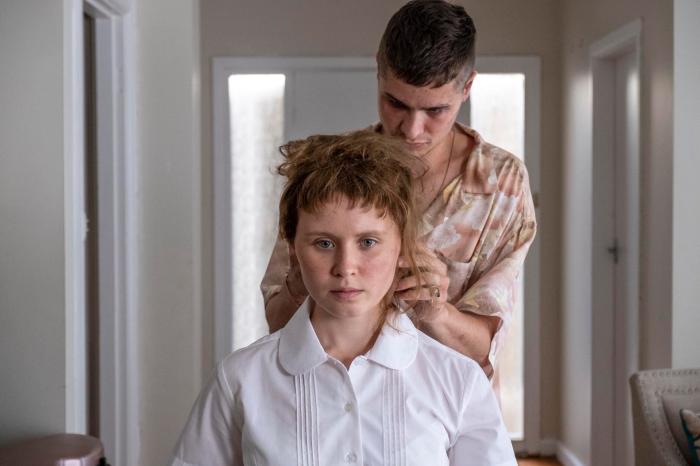 I’m not exaggerating when I say that all cast members hit this thing right out of the park. If you don’t know Eliza Scanlen by now, then you better get to know her quick because she’s smashing project after project from Sharp Objects to Little Women to what I’m sure will be an awesome performance in the upcoming The Devil All The Time. She’s been nothing less than excellent in everything that I have seen her in to date, and she’s absolutely magnetic here at Milla. Once second very mature, the next very childlike, Scanlen perfectly captures that odd period in a young woman’s life where everything is in transition, with the added excruciating caveat of a cancer battle to contend with. Her charisma fills the screen, and the dark humour of the script exudes from her effortlessly. Can you tell that I love her?

As Milla’s parents Anna and Henry, Essie Davis and Ben Mendelsohn are beyond perfect. Both characters are loving but flawed, dealing not only with the emotional turmoil of seriously ill daughter but also with various problems of their own, and there is just something almost painfully real about both characters that is massively helped by the excellent performances. We all know how great Ben Mendelsohn is at this point, but for me the star of the show next to Eliza Scanlen is Essie Davis. Depending on how dosed up she is, mum Anna is either a very docile or very manic presence, and Davis is excellent at both ends of the spectrum. Much of the banter that she and Mendelsohn share provides the most effective dark comedy within the film.

It’s harsh to say that Toby Wallace makes the smallest impact as Moses, but it’s kind of true I guess. Hard to shine when you are sharing the screen with what I believe to be three genuine superstars in Scanlen, Davis and Mendelsohn. In terms of being lovable and charismatic enough to make the central conceit of the film believable, however, Wallace does a great job in the sort of stereotypical bad boy with a heart of gold role.

Overall, Babyteeth is probably going to finish the year as one of my favourites. It’s a very different type of coming of age story, one that focuses just as much on the parents as it does the teen, and it’s also a drama that is able to find genuine, effective humour in the most dire of narrative circumstances. It’s not perfect, but it’s pretty close. At one point, the film hints at taking a particular direction that would have been truly bold, and I wish it would have had the courage to do that. Once you have seen it, you will know what I’m talking about, but even so, it’s a great, great movie.