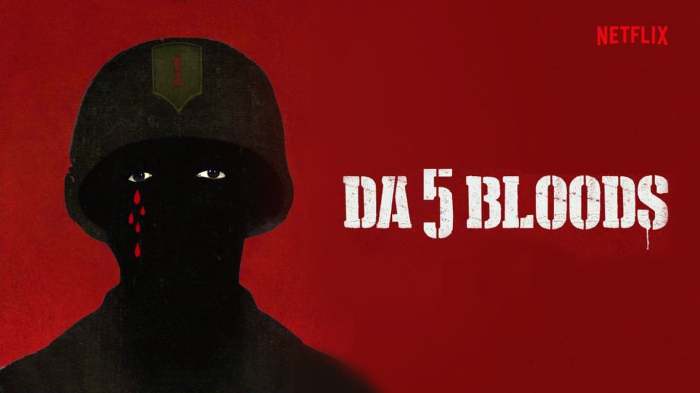 I’ll be the first to admit that as someone who considers themselves a true film lover, I don’t pay near enough attention to directors compared to actors. I can probably count on both hands the number of directors that signal an automatic watch for me, whereas my personal list of must watch performers is vast. One name that does happen to be on that small (but expanding) director list is Spike Lee. I can’t think of a better time than right now to dive back into this iconic filmmaker’s work.

Set to be one of Netflix’s biggest releases this year, Da 5 Bloods tells the story of four African American vets (Delroy Lindo, Clarke Peters, Norm Lewis and Isiah Whitlock Jr.) who travel back to Vietnam in search of the remains of their long lost squad leader (played by Chadwick Boseman) and the buried treasure that they left behind many years ago.

It’s hard to put a neat label on Da 5 Bloods because, in true Spike Lee fashion, it is so many different things. Equal parts caper, war movie, comedy, action adventure, buddy movie, satire, it’s a super ambitious and wild ride that is nothing short of brilliant, even if some parts don’t work as well as others. I can’t proclaim to be a Vietnam drama expert, but from the examples in the genre I have seen, everything has been very, well, white. The Deer Hunter tells one kind of story, and in many ways Da 5 Bloods feels like the exploration of a similar war journey told from a different perspective, a massively important and politically charged perspective.

Alongside all of the fun one liners, physical comedy and striking action, there is a strong thread of real political and social commentary throughout the narrative. Through these engaging central characters, audiences are given an insight into the kind of conflict that black soldiers in particular must have felt during the time of the Vietnam war. Risking one’s life and limb for a country where your own rights are still far from equal is a baffling concept, yet there they were, fighting for a cause in which many of them did not believe. In exactly the same way that he did with 2018’s BlacKkKlansman, Spike Lee has proven himself to be a master of teaching audiences an important and uncomfortable lesson whilst never forgetting to entertain.

Not every stylistic choice made across this two and half hour epic works for me on a personal level, but I will always give more credit to a film that tries different things over one that sticks to the old tried and tested formats. Something that is strikingly good, however, is the use of music from start to finish. The work of Marvin Gaye is very prevalent across the narrative, with one particular sequence set to the isolated vocal of ‘What’s Going On’ giving me total chills. 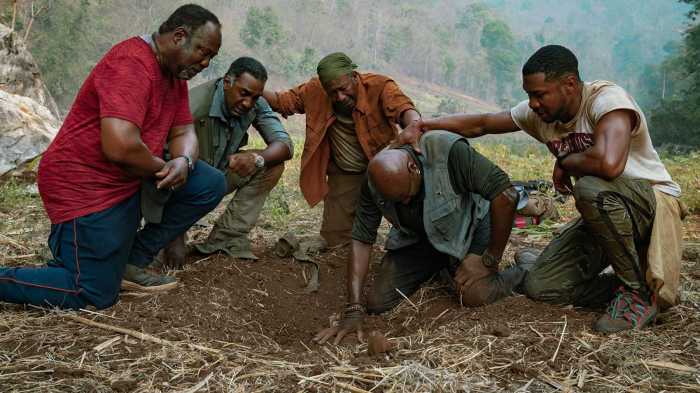 A true ensemble piece, the fact that Da 5 Bloods’ two and a half hour runtime flies by is testament to the excellent performances from its large leading cast. As Paul, Otis, Eddie and Melvin, Delroy Lindo, Clarke Peters, Norm Lewis and Isiah Whitlock Jr. all bring their own distinct traumas and demons with them to the Vietnamese jungle. Delroy Lindo as Paul, in particular, evokes many familiar PTSD, ‘haunted past’ character traits that we are accustomed to with this genre, and his descent into further madness is really something to behold.

Just as much an exploration of male bond and friendship as it is a war movie or action caper, the four leads (along with the ever impressive Jonathan Majors as David, Paul’s son) are effortlessly engaging as a group with unimaginable shared experience and history. Supporting players including Mélanie Thierry, Johnny Trí Nguyễn and Paul Walter Hauser pop in and out of the narrative to good effect, but there is no doubt that the film is absolutely at its best when spending time with our four vets, their memories, their humour and their baggage.

Overall, Da 5 Bloods one hell of a wild ride. It’s not perfect, but it feels alive and charged with all kinds of filmmaking electricity. Charisma in front of the camera and charisma behind it, I certainly haven’t seen a Vietnam movie like this before. Spike Lee has clearly set out to do a lot of things with this story, and for the most part, he achieves it. Messy in places, but never not enjoyable and never not prescient.

In a week, month, year, LIFETIME when audiences are finally starting to make an effort to consume more black stories and black filmmaking, this latest Spike Lee joint is a great place to start.