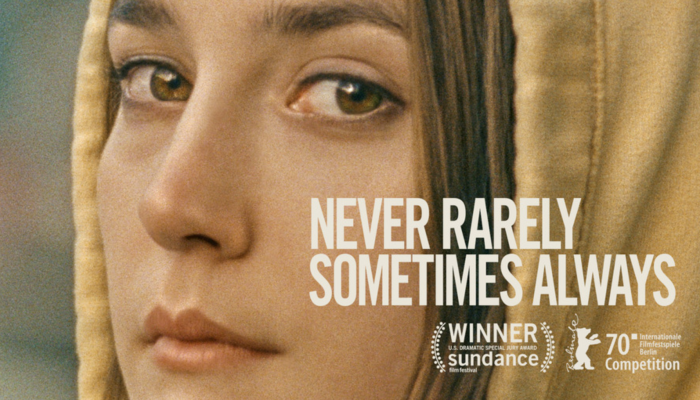 I don’t know about you, but the general rule for me is that if a picture makes waves at the Sundance Film Festival, it’s pretty much a certainty that I am going to be a fan. From Little Miss Sunshine to Donnie Darko to Whiplash and many more, some of my all time favourites have gained acclaim and wider attention thanks to Sundance, so when its premiere generated major hype in January, Never Rarely Sometimes Always went straight on my ‘to watch’ list.

The film tells the story of Autumn Callahan (Sidney Flanigan), a 17 year old from rural Pennsylvania who, with the company of her supportive cousin Skylar (Talia Ryder), embarks on a journey to New York City to seek out an abortion for an unintended pregnancy. Anyone with even a slight comprehension of what that kind of journey takes in this current climate, both physically and emotionally, will already know what kind of narrative is in store.

This is a tough watch, both for its deliberate slow and gruelling pace, and for the bullshit hoops that the poor protagonist has to jump through in order to make a sensible decision for her future. So honest and authentic in its execution that it doesn’t really even feel like a film, just a showcasing of completely believable and relatable events. I seem to be making a habit recently of watching films that are powerful, but not that enjoyable to watch. Everything about Never Rarely Sometimes Always is restrained, unflashy, and quiet, but the film says more in its silence that most ‘showy’ dramas manage to say in two  plus hours of scenery chewing.

Abortion is obviously the leading focus of the film, but it is really refreshing to see a story in which moral turmoil about whether or not to actually go through with the procedure isn’t even a consideration. This isn’t a narrative about the ethics of abortion, it’s a narrative about how harrowing and infuriatingly difficult it can be to try and do what is best for you, especially when you are a young, underprivileged woman in America.

Strikingly, there is a distinct feeling of a lack of safety throughout the film, with a different obstacle to overcome at every turn. From the unwanted judgement of an anti abortion veering clinic in Pennsylvania, to the overt dangers of having to navigate unknown corners of late night New York, to hints at the troubles of Autumn’s personal life, there is nothing about the film that feels comfortable, and that is deliberately and masterfully so.

In what appears to be both their debut feature film performances, Sidney Flanigan and Talia Ryder are fantastic as Autumn and Skylar. Never Rarely Sometimes Always is just as much about the power of female friendship and support as it is a drama about abortion, and the dynamic that the two girls create on screen is one that will feel very familiar to many girls and women watching.

As Autumn, Flanigan hides just as much as she shows, making her a hard to read character but a completely engaging one. The background of her pregnancy is never revealed to the audience, but the film plants enough seeds in and around the subject to give the sense that whatever happened, it wasn’t a great situation. Flanigan could almost be described as something of a ‘searing introvert’. Her performance is minimal and at times muted, but there is always an intensity there that is threatening to spill over. Every decision made perfectly reflects the numbness that the character must be experiencing during such a tough time.

Talia Ryder is another revelation as Skylar, a willing companion on their journey to New York who is willing to put herself in harm’s way in order to help her cousin in her time of need. Both girls are subject to a plethora of micro-aggressions in their hometown and all the way to New York, and their expedition is one that will strike a knowing anxiety in any female viewer who has had to fend for themselves before.

Overall, you can probably tell that I was very, very impressed with Never Rarely Sometimes Always. It is by no means a comfortable or classically ‘enjoyable’ film, but it is a poignant and powerful one that deserves as many eyes on it as possible. Long, arduous, stressful, threat filled journeys are supposed to be reserved for Lord Of The Rings type scenarios, not the sensible matter of clear mindedly wanting to terminate an unintended pregnancy. Food for thought.