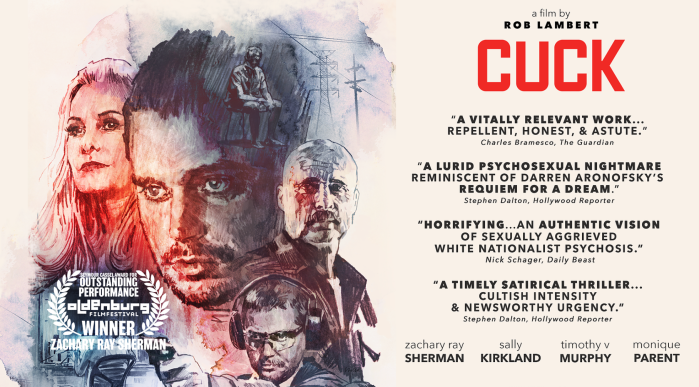 As the lockdown continues, each week’s new releases are getting increasingly thinner on the ground. But, with very few things happening in everyday life to remind what day it is, I’ve started to turn to this blog as a means of tracking time! One new review equals one new week in our current dystopia, and it just so happened that the only real option for me this time around was Cuck, a film that, I’ll be honest, I wasn’t particularly excited to see.

Cuck tells the story of Ronnie Palicki (Zachary Ray Sherman), an angry, sexually frustrated, socially stunted man whose broad right wing views begin to lead him down the online alt-right rabbit hole to disastrous and dangerous effect. If you’re looking for a recent comparison, then just imagine Joker, but without the clown makeup and the loose ties to comic book legend that trick you into thinking what you are watching is impressive and cool (don’t @ me bro).

From a problematic relationship with his mother (played by Sally Kirkland) to sexual inexperience that results in a general hatred of women to blaming his own lack of work ethic and success on harder working immigrants who have ‘stolen’ his opportunities, Ronnie as a character ticks pretty much every box when it comes to the archetypal ‘incel’ character, and one of the key flaws that the film has is its lack of ambition regarding certain motivations and actions. I can’t say I’m well versed in the culture of dudes like this, but I can’t imagine that every single one of them shares the same tired traits. Cuck had the opportunity to tell an all too unfortunate and familiar story in a different kind of way, but what unfolds over the course of two hours is nothing that you haven’t seen before in far, FAR better films like Taxi Driver.

In order to grab at something original and different, the film veers off on some pretty wild tangents, delving deeper into Ronnie’s sexual life, but ultimately these subplots end up feeling unnecessary, seemingly only included as a literal reference to the origins of the picture’s titular insult.

There’s no arguing that the film is gritty and grimy and horrible to watch, but what makes it a failure for me is the fact that it really isn’t adding anything new to the conversation. No spoilers obviously, but I will say that every single thing you expect to happen over the course of the narrative, does happen. From a personal point of view, I’m looking for something more nuanced at this point in the social commentary game. Cuck doesn’t play with morality in any type of interesting way. Ronnie starts out as a lost cause, goes through the plot as a lost cause and ends the movie as a lost cause. What is intriguing about that?

As our protagonist, Zachary Ray Sherman is as repugnant and pitiful as you would expect him to be. Horrifyingly, there will be some that regard him as an anti-hero, victim to all of the supposed forces ‘ruining’ his life, but I see nothing but hate and dysfunction. On the whole, Sherman does well in an extremely unlikable role. You hate him, and you are supposed to hate him, so what can I really say? That I believed him, I suppose.

Doing some more interesting work is Sally Kirkland as Ronnie’s mother. Seventy eight year old Kirkland quite literally bares it all in a really unhinged and unflattering performance, but one that makes a huge impact in her limited time on screen. The unhealthy and at times disturbing relationship that Ronnie and his mother share actually proves to be the most interesting element of the film for me. It is still part of the wider cinematic incel trope, but it is more arresting to me than any of the generic racism and ‘gun stuff’ of which the rest of the narrative is comprised. We’ve certainly seen the fucked up mother/son dynamic played out before, but Sherman and Kirkland have added their own striking version to the collection, and it’s as icky as you would expect.

Overall, Cuck is an odd film. Odd in the sense that I’m not entirely sure who it is supposed to be for. It’s a tiresome and mostly unrewarding watch, despite its mostly bold and impressive central performances. It doesn’t say much for a movie when the true power of the narrative is felt after the fact; in the feeling that there are going to be real dudes out there who will see this and think ‘wow, what a hero’. Probably starting in the White House…