Hello, anybody out there? It’s only been a week since my last post, but I feel like I’ve aged about eight years. With the UK now in full lockdown, any kind of new film experience I am going to have for the foreseeable future is going to have to come via the internet, and coming to the rescue (for this week at least) are the generous folks over at Curzon Home Cinema who gifted a free code to all members for Kore-Eda Hirokazu’s latest offering, The Truth.

Marking the director’s first film set outside of Japan and not in his native language, The Truth tells the story of the strained relationship between Fabienne (Catherine Deneuve), a legendary French actress, and her screenwriter daughter Lumir (Juliette Binoche). Reuniting in Paris for a celebration of Fabienne’s upcoming memoir, tensions build, arguments are had, and grudges are unearthed, with both parties bringing regrets, resentments and unresolved issues to the table.

Though written and directed by a Japanese filmmaker, it’s fair to say that The Truth feels every inch a piece of French cinema! Not only does the audience get to witness two of the country’s most iconic talents play off one another, but the tone and pacing of the narrative is immediately evocative of many French family dramas that you will have seen before. In stark contrast to something like the American August: Osage County, the film opts for a very reserved, pinched, melancholy kind of family tension rather than huge, bombastic, earth shattering throw downs. Where you might be used to a shouting match, The Truth instead chooses pointed silence. Where you might be used to life changing revelations, The Truth instead chooses smaller scale hurts and secrets that are more intimate to the mother/daughter dynamic.

That isn’t to say, however, that what plays out is not poignant and affecting. The film might not be a searing, Arthur Miller-esque glimpse into family tragedy, but as the title suggests, there is a lot of truth to be found in both the themes and the performances. Balancing out the quiet tension from start to finish is a thread of genuine humour, that sort of sarcastic, underhanded brand of comedy that, whilst being quintessentially French, also translates extremely well. It is subtlety that The Truth relies on to make an impact, not huge reveals and furniture chewing. 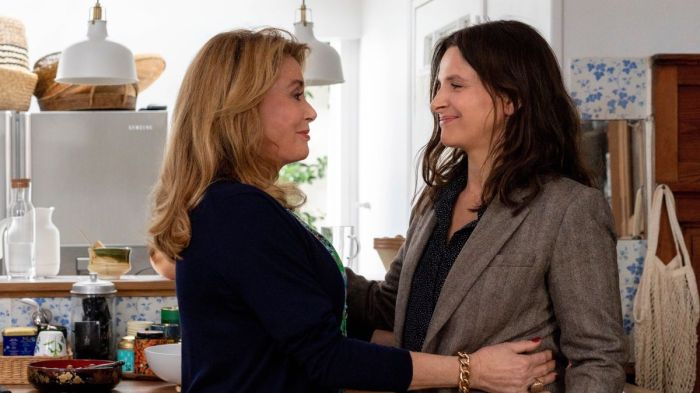 You really need two charismatic and powerful leads in order to get the most out of a film like that, and in Catherine Deneuve and Juliette Binoche, The Truth certainly hits that particular requirement out of the park. I have been turned off by more than a few of her controversial, contrarian comments in the last few years, but there is no denying the effortless talent of Catherine Deneuve.

As Fabienne, playing almost a fictionalised version of herself in some ways, Deneuve has more poise and presence in her litter finger than some actresses have in their entire bodies. In a similar way to someone like Meryl Streep, her presence in a film feels like an event, and no matter her age she still oozes those signature qualities that have kept her at the forefront of French cinema for decades.

As Lumir, Juliette Binoche represents a similar level of stardom from a different generation. Films like The English Patient and Chocolat were some of my favourites growing up, and from The Clouds Of Sils Maria to even something as mad as High Life, Binoche has continued to make interesting choices in this new era of her career. Together, the two French icons are wonderful to watch, displaying their craft in big and small ways throughout. You’ll be hard pushed to find a bette mother/daughter duo in cinema this year.

Ethan Hawke has a prominent supporting role as Hank, Lumir’s American actor husband, but to be honest he fails to make as much of an impact as his two female co-stars. The character is deliberately intended to be a sort of culture clash, not understanding conversations, misinterpreting statements etc. He is by no means an antagonist, but from a personal point of view I kept finding myself longing for the film to return to the Deneuve/Binoche tête-à-tête.

Overall, The Truth is a really solid watch. It is a family drama filled with tension, but not a film completely filled with hate. There is an easy feeling switch between conflict and tenderness that feels really authentic for a strained family dynamic that stills contains a lot of love in parts. Witty in parts, poignant in others, and containing the ‘film within a film’ trope that I always have a soft spot for, The Truth is a pleasant couple of hours. If nothing else, it helped to take my mind off current affairs for a little bit! I’m hoping to catch a few more releases on home cinema in the next couple of months. In the words of Dame Vera Lynn, we’ll meet again, don’t know where, don’t know when!