Welcome to post Oscars season, folks. We are well and truly in the depths of that peculiar time in the cinematic calendar when, honestly, going to see a movie is an absolute lottery. There are weird kid’s movies around, there are unheralded horror movies around, and there are most definitely comedies of varying successes around. Awards season is notoriously reluctant to give much love to the comedy genre, but let’s be real, if you are dropping your movie into the weeds of February, then the alarm bells are already ringing. Would my suspicions about Like A Boss be confirmed?

Oh boy, yes, yeah, yep. The film tells the story of lifelong BFFs and business partners Mia Carter (Tiffany Haddish) and Mel Paige (Rose Byrne), whose personal and professional relationship is put to the test when their small independent makeup company stirs the interest of cut-throat cosmetics mogul Claire Luna (Salma Hayek). With offers made and heads turned, the narrative proceeds in a very familiar, conflict driven fashion, with Mel eager to make her millions and Mia more interested in maintaining control of their own lives.

The problem here, though, is that hardly anything is funny, hardly anything is interesting and hardly anything holds your attention. I’ll admit that I’ve got a soft spot for these mediocre kinds of female lead comedies, and I’m far more willing to give them passes than I am for other genres, but even I have to admit that Like A Boss is a struggle. Thinking back, I think my ‘laugh out loud’ count topped out at about three, which is not nearly enough for a feature length film. Though I can’t say that I desired any more context or time with characters, the movie runs at a brisk 80-ish minutes, so there isn’t really anytime to think about what is happening!

Stripped down to and assessed by its component parts, the film really should be better than it is. I love stories about female friendship and the ups and down along the way, I love an outlandish antagonist coming in to rock the boat, and like I said before I’m a bit of sucker for the kinds of more R-rated narrative that have been working to replicate Bridesmaids ever since it changed the ‘chick flick’ landscape. Like A Boss has all of these elements, but for one reason or another it falls flat far more often than it hits a high note. 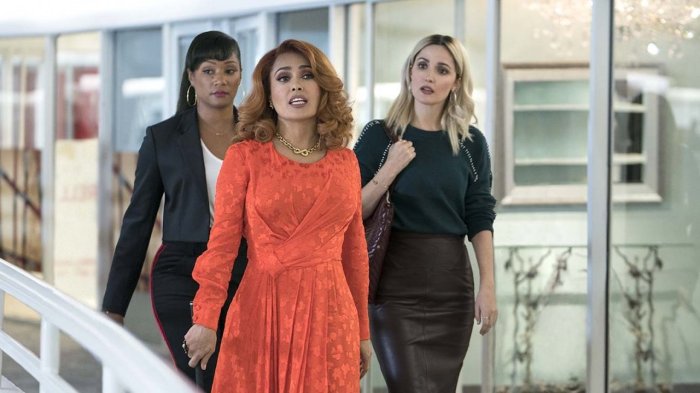 Huge props to Tiffany Haddish and Rose Byrne for getting the absolute most out of what they were given. It’s testament to just how watchable both Haddish and Byrne are that the film is even partially enjoyable from moment to moment. As Mia and Mell, the pair share a great BBF due chemistry, it’s just a shame that that chemistry is wasted on something as ineffective as this. I would love to see them given another opportunity together in something with a much better script.

It pains me to say it because I generally love her, but there is nothing I can say about Salma Hayek in Like A Boss other than YIKES. I’m sure I have seen her be comedic before, but it’s not an exaggeration to say that for these particular 80 minutes she doesn’t look like she has a single funny bone in her body. The character of Claire Luna is more or less there to be the antagonistic catalyst for comedy between the two BFFs, but still, it actually borders on painful when she’s in full flow. The lack of chemistry she has both with Mia and Mel, and with literally everyone else on screen, is obviously intentional, but man, there is just something about Hayek in this that does not work at all.

Coming in to help partially save the day are Jennifer Coolidge and Billy Porter, who provide all of the air headed camp that you could possibly want as the other members of Mia and Mel’s close knit staff. Billy Porter in particular has a couple of standout moments, one of which counted towards my three total belly laughs in the movie. Thanks Billy!

Overall, I think it’s fair to say that Like A Boss is a comedy that does not work, mostly because of its lack of real comedy. In very much the same way that I bemoaned the failure of Suicide Squad, underneath the mess you can see the bones of something promising. That promise, unfortunately, is dashed by a sloppy script and a distractingly bad performance from one of the film’s main performers (sorry, Salma). Absolutely harmless as the kind of movie that you might throw on at home for a night in with the girls, but to be honest, you probably deserve better.