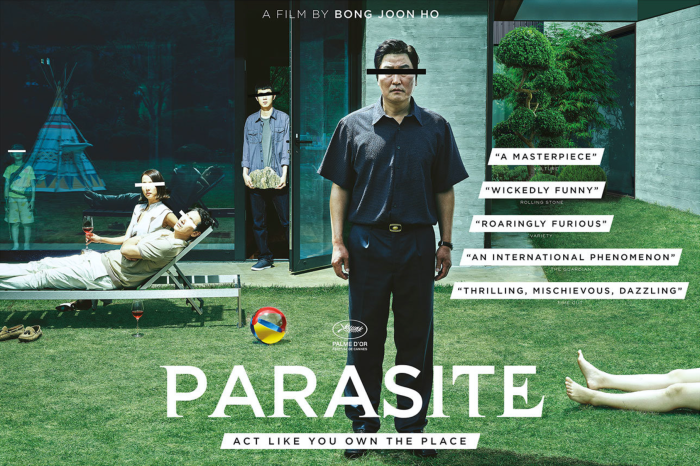 Something really awesome happened last night. For the first time in its 92 year history, a foreign language film won Best Picture at the Academy Awards. When you consider just how many incredible international films have graced the big screen since the 1920s, this is an amazing achievement, and along with statuettes for Best Original Screenplay, Best International Feature and Best Director, it’s safe to say that Bong Joon-ho had a pretty decent night in Hollywood! In typical overdue fashion, Parasite only hit British cinemas two days before the Oscars, but boy oh boy am I glad I caught it in time to join the party.

Set in the filmmaker’s native South Korea, Parasite tells the story of the Kim family; father Ki-taek (Song Kang-ho), mother Chung-sook (Jang Hye-jin), daughter Ki-jeong (Park So-dam) and son Ki-woo (Choi Woo-shik). Struggling to make ends meet, the Kims take the decision to scheme and con a wealthy, unassuming family into hiring them in various household positions whilst posing as completely unrelated, high qualified individuals. Very quickly, however, the wheels of the plan begin to loosen, and the family end up experiencing much more than they bargained for…

The first and most important thing to say about Parasite is that it is truly, truly brilliant. A black comedy with a huge portion of classic thriller and drama thrown in, the film is one of those increasingly rare examples of a picture that possesses oceans of psychological and metaphorical depth, whilst also not forgetting to be a straight up roller coaster of a great time on the surface. Whether you want to just watch something that will make you jump and gasp from twists, or you want to watch something that actually has a point of view and hidden messages around every corner, Parasite ticks all of the boxes and it does so in a really fashionable and stylish way.

The very best films are those that become more and more impressive the longer you think about them after the fact, and I’m not exaggerating when I say that I could probably talk about the theories and metaphors in Parasite for hours. For the first time in ages, it feels like the Academy have succeeded in rewarding a picture that feels like both a popcorn eating good time, and an intelligent and layered narrative masterpiece. Thank god, after last year’s Green Book debacle I was beginning to think they no longer had it in them.

Parasite is the kind of film that restores my faith in the belief that you can make a high quality, thought provoking picture without having to be pretentious as part of the bargain. When I compare this to something like The Lighthouse, for example, it’s night and flipping day. That film chooses to be ostracising in its superior approach, whereas Parasite is just as thematically dense and complex its message, but doesn’t forget the most important thing, that you actually need to entertain your audience to keep them on your side.

Whilst the film as a whole scooped up the main prize on Sunday night, none of the picture’s stars were nominated in leading or supporting acting categories. Interestingly, this is the first time this has happened for a winning film since 2008’s Slumdog Millionaire. Whether the subtitles nature of the movie proved to be something of a performance disconnect for English speaking voters, who knows, but one thing for certain is that every single actor involved in Parasite does a fantastic job.

The film works so perfectly on an ensemble level that I almost don’t want to single out anyone in particular, but rest assured that every member of the central Kim family, along with Lee Sun-kyun and Cho Yeo-jeong as the parents of the targeted Park family are all excellent in their respective roles. The more I dive into the details, the more at risk you are of being spoiled, so the only thing I can really do is tell you to get out there and see the film for yourself. In the UK, it’s literally only one weekend old, so you have absolutely no excuse!

Overall, I think it’s clear to see that I loved Parasite. Not only do I love the film itself, I also love the rightful praise and attention that has been bestowed upon it by powerful awards bodies who have the influence to make or break a project. Parasite winning Best Picture at the Academy Awards is a landmark moment in film history, and whilst it doesn’t necessarily right the wrongs of all the deserving but ignored foreign language films that have come before it, it certainly has opened the door for stronger international inclusion in main categories for the years to come. This time last year, I was so disillusioned by the win of Green Book. My feelings couldn’t be more opposite right now!