I don’t know about you, but I have a real soft spot for political scandal and corruption films. They hold a strange but strong place in my heart for being the kinds of movies that I watch once and never again, usually because they feature uncomfortable home truths that provide a lot of gripping drama, but more than often don’t possess many of the ‘entertainment factor’ elements that drive viewers to watch other genre offerings again and again and again. I’ve never been tempted to watch The Post or Frost/Nixon after the first viewing, but that doesn’t mean I didn’t enjoy the experience. I imagined that The Report would be more of the same.

And overall, I was right, but that isn’t a bad thing at all. The Report tells the decade long story of Daniel J. Jones (Adam Driver), a United States Senate staffer who is tasked with writing an extensive report on the CIA’s use of torture methods in the aftermath of 9/11. Working under the instruction of Senator Dianne Feinstein (Annette Bening), Jones uncovers much more than he bargained for and begins and ignites a years long battle of obstacles and red tape on the way to publishing his findings.

The first thing to say is that this is a heavy, serious movie, hardly surprising given the core subject matter. The narrative assumes a pattern of lots and lots of document reading in dim, stuffy rooms, punctuated with brief but shocking flashbacks of the torture under investigation. The Report isn’t the kind of movie that is going to have you on the edge of your seat, but if you have an interest in this kind of story then it provides a really engrossing and satisfying experience on the whole. This isn’t a sensationalised, Zero Dark Thirty type of project, it’s a project that deals with the aftermath and measured ethical evaluations of such an event.

The torture of suspected terrorists isn’t necessarily the kind of thing that an average person wants to think about, especially when it comes to the legality and moral implications of such actions. The Report strips away any of the comforting ‘civilian distance’ that the audience might have from this world, and throws them in at the deep end, putting faces to the violence and posing lots of interesting ethical questions. If a supposed ‘civilised’ country is happy to waterboard suspects with little to no evidence connecting them to targets, what makes them any better than their enemies? There will be many among us who believe in getting certain answers by any means, but something that the film does really effectively and decisively in my opinion is lay out the evidence for why this particular brand of interrogation simply does not work.

The film is probably best described as a gripping slow burn in terms of a lack of sustained action or kinetic tempo from scene to scene, but something it does do better than a lot of similar stories is manage to pack the better part of a decade into a two hour picture in quite an effortless and economic fashion. The years roll on in neatly signposted segments, and it has the double effect of maintaining a pleasing pace whilst also giving the audience an empathetic sense of just how time consuming and relentlessly slow moving the process of investigation really is. 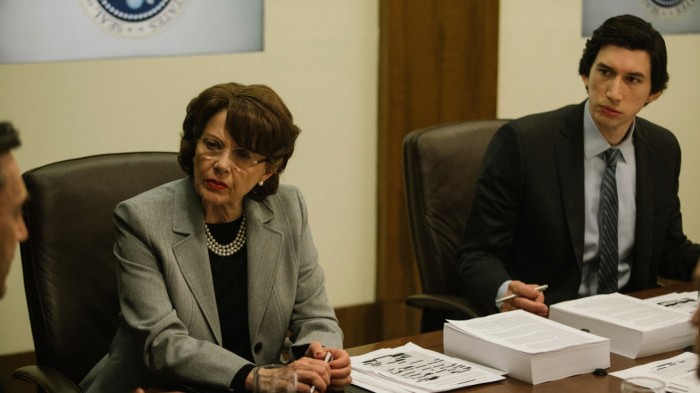 The Report is the kind of film that provides a lot of opportunity for actors to really display their subtle craft, and both Adam Driver and Annette Bening take this opportunity with both hands. Although he seems destined to be garnering more attention for the upcoming awards favourite Marriage Story, Adam Driver is great as Daniel J. Jones. Utterly believable as the kind of dedicated, pushed to the point of insanity professional who doesn’t think twice about producing a report longer then the Bible, Driver possesses that kind of innate intelligence and presence that gives the audience no reservations about the important of his discoveries and the integrity of his work. At this point, perhaps with the exception of The Dead Don’t Die, I can’t think of a single Adam Driver performance that I haven’t fully loved.

Again unsurprisingly, Annette Bening is on another level with her portrayal of Senator Dianne Feinstein. I feel the same way about Bening in this movie as I did watching Jane Fonda during her time on The Newsroom, she’s a woman effortlessly in charge who steals every scene in which she appears. Used somewhat sparingly and very much an atypical ‘supporting actress’ within the story, you are left wanting more and more of Bening every time she shows up. I’d love to see her get some awards attention for this, but I fear it might get lost among other more ‘showy’ campaigns.

The classic hallmark of a ‘quality’ film, the rest of the supporting cast are made up of names that could easily be leads in other projects, including Jon Hamm, Michael C. Hall, Maura Tierney, Jennifer Morrison and Corey Stoll. There is calibre everywhere you look and this comes through in every scene.

Overall, The Report is a ‘behind the scenes’ type of political drama that isn’t going to be to everyone’s taste, but it had me invested from the very start. A challenging but gripping subject matter and top tier acting, what more do you need in this kind of picture? The Report serves as a reminder that no matter what side of the fight you are on or how powerful of an institution you are, you need to be held accountable for rogue and downright wrong actions. Otherwise, when and how does the fuckery end?