Given the sheer amount of possible PR and advertising avenues these days, it is very rarely that I go into a film having seen or heard absolutely nothing about it. In a fortnight filled with high profile Netflix releases like The King and The Irishman, The Aeronauts transpired to be a perfect example of such! With enjoyable names attached and the promise of some cool visuals, I went into the theatre with zero expectations.

And I am happy to report that I came out relatively pleased with the experience. Inspired by true events and a sort of mish-mash of both real life events and fictitious embellishment, The Aeronauts tells the story of James Glaisher (Eddie Redmayne), the real nineteenth century meteorologist who embarks on a record breaking scientific discovery ascent into the skies with the help of Amelia Wren (Felicity Jones), a fictitious daredevil hot air balloon pilot.

The film takes place in an almost real time fashion depicting the dangerous balloon ride, interspersed with narrative flashbacks that help to flesh out and establish the story, and for the most part, it is a perfectly inoffensive and at times very visually striking Victorian adventure. Whilst the action set pieces don’t necessarily have you gasping on the edge your seat in a Gravity-esque fashion, there is certainly something interesting and unique about the period setting. I’ve never seen ‘hot air balloon action’ like this before, and there is something fun and almost whimsical about it, even when the situation is at its most perilous.

There’s no doubt that the most interesting and arresting parts of the film are those that take place in the balloon, thanks to some inventive action, a whole lot of visual excellence and a great chemistry between the leads. Where The Aeronauts doesn’t feel quite as entertaining is in the various flashback scenes. They fill in blanks that the audience could have otherwise assumed or been told by the characters in real time, and mostly feel very pedestrian and exposition filled compared to the fresh feeling happenings in the sky.

It isn’t often that audiences are treated to a disaster/survival type movie set in the Victorian era, and this certainly gives the film an interesting edge. It’s pretty to look at but if you strip back the uncommon setting, the actual tension of the drama and the action isn’t quite as impressive as it wants to be. There is a whimsical pleasure about the film, but I certainly can’t sit here and tell you that you need to run straight to the nearest cinema to see it. 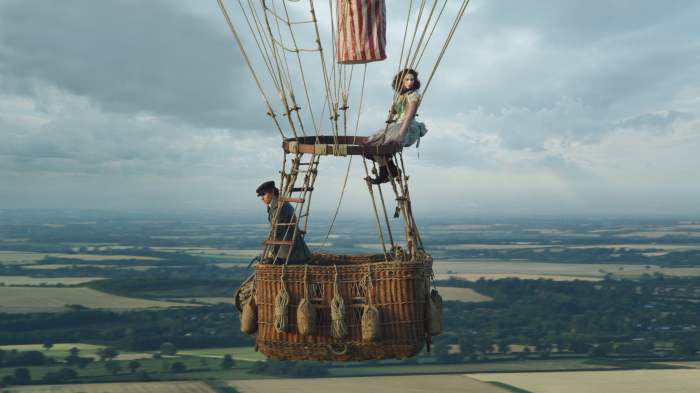 Continuing the partnership that they struck up in 2014’s The Theory Of Everything, Eddie Redmayne and Felicity Jones both put in enjoyable performances. As James Glaisher, there is a hint of the familiar Newt Scamander about Redmayne, a similarly sweet and unassuming ‘geek’ who shows moments of bravery when up against it. The role isn’t anything particularly challenging for the Oscar winning actor, but he definitely brings the character to life in a way that compliments the period setting.

The star of the show, though, is undoubtedly Felicity Jones. As Amelia Wren, she is enigmatic and fun and carries the bulk of the emotional weight of the film, both on the action filled balloon ride and in the flashbacks that tell of her tragic past. Jones really seems to be going from strength to strength in her projects of late, and this is another film stealing performance to add to her plaudits early in the year for On The Basis Of Sex. She is fast becoming one of those actresses that I am willing to see in pretty much anything.

As a duo, Redmayne and Jones clearly have an enjoyable and recyclable on screen chemistry. Redmayne’s responsibility of portraying a real life figure leads to him being somewhat of a straight man in the narrative, leaving Jones to have much more fun with her character who appears to be an amalgamation of several different non-fictional inspirations. This is about as much of a two hander as you are going to get in a major release these days, but the good news is that the two (or should it be four?) hands at work add a seal of quality to the film that it might not otherwise have had.

Overall, it’s fair to say that The Aeronauts is a film with lofty ambitions that threatens to soar in moments, but ultimately never manages to really take off. Worth a watch for the interesting setting, unusual balloon based action set pieces and a particularly enjoyable performance from Felicity Jones, but certainly not a picture that is going to live long in the memory.