Let me be clear. I love the traditional experience of cinema as much as the next movie lover, but when a film is longer than two hours and I am presented with the chance to watch its release at home on Netflix instead, you can be damn sure I’m going to do just that. Having a particular penchant for juicy historical drama, this much hyped Shakespeare inspired feature sounded like my idea of a perfect evening under the duvet.

Based on the ‘Henriad’ series of plays by William Shakespeare, The King tells the story of England’s Henry V (Timothée Chalamet), chronicling the early stages of his reign and the lead up to the infamous 1415 Battle of Agincourt. Known for his status as an outsider and family rebel before settling into a more mature role as one history’s most prominent ‘warrior’ kings, the film acts as both an epic war drama and a medieval coming of age tale, showing the audience different sides of Henry’s personality as his legend builds.

It doesn’t happen to me a lot, but The King is one of those films that has actually grown on me in the twenty four hours or so since watching it. It is by no means perfect, but there is just something about it that wins you over in the end. I will say that the film feels too long, and I will say that it takes a handful of scenes too many to really get going, but once the story hits its meaty stride there is no doubting that the second half in particular is rich and rewarding for fans of this genre.

The word that I keep coming back to is gravitas. Whether it’s the Shakespearean source material, the sweeping score, the striking central performances, or more likely a combination of all three, The King certainly works its way up to being a film that feels somewhat ‘important’ and epic in parts. There is a weight to the narrative that makes for engaging historical drama, but it is a weight that is very much saved for the second half of the picture. If you are willing to bide your time and wade through a few too many mundane sequences in the opening third of the movie, then you will definitely be rewarded with something approaching great in the home stretch.

There are a couple of real standout moments in the film that feel of a far superior quality to the rest, primarily the central focus on the Battle of Agincourt and some more subdued but tense dialogue scenes in the final third. The action feels heavy and visceral and the writing on the whole is impressive, I just really wish that more of the first half of the picture had been left on the cutting room floor. With a little more restraint in the running time and more dedication to a slightly faster pace on the journey to the final third, The King could have gone from a seven out of ten to at least a nine. 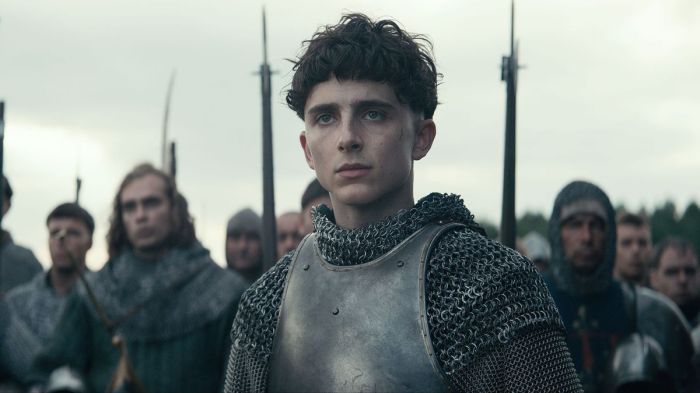 There is no doubting that Timothée Chalamet is on his way to becoming to stand out actor of his generation. From Call Me By Your Name to Lady Bird to Beautiful Boy, Chalamet puts a seal of quality on everything he touches regardless of how successful the over picture might be. As Henry V, he continues his winning streak. I wouldn’t call it a perfect performance, there are a few brief occasions when the weight of the material seems a little too heavy for him to carry on his own, but for the most part Chalamet is wonderful in the role. He possesses a natural charisma that does wonders for the character.

And then, there is Robert Pattinson! As the Dauphin of France, Henry’s main antagonist across the sea, Pattinson gives the kind of performance that you are either going to love or laugh at. Pattinson’s French accent is quite frankly bonkers, and the character’s sort of elevated, unhinged nature sometimes makes it feel like he is in a different film entirely. Pattinson certainly commits to the role and the characterisation, and thankfully it feels as though the film understands the bizarreness of it and uses the Dauphin very sparingly. It’s the sort of performance that you really have to see for yourself!

Overall, The King is a rich historical drama that feels high quality, from the acting to the cinematography to the pretty amazing score by Nicolas Britell. It takes the rich Shakespearean source material and turns it into something that feels accessible for general audiences whilst maintaining that all important epic feel. Fifteen minutes of fat could definitely have been trimmed to make the film even tighter and pacier, but slight over indulgence is something that this genre is well accustomed to to be honest. Worth seeing for the continued ascendence of Timothée Chalamet alone. It’s only a matter of time before he’s got a few of those coveted golden statuettes to his name.