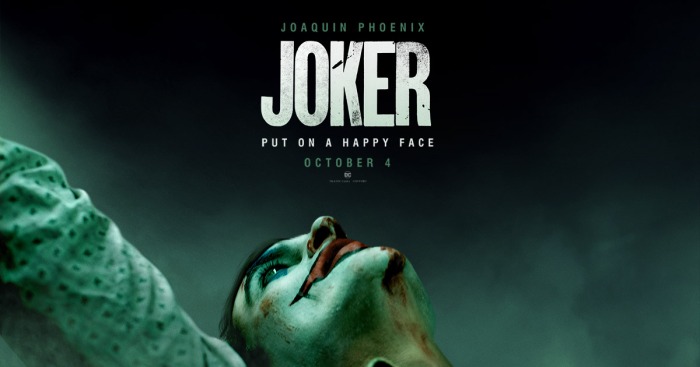 At this point in the game, I don’t think it’s a controversial statement to make that in the long and historied list of comic book villains, the Joker is the single most iconic. From Cesar Romero to Jack Nicholson to Heath Ledger, the character has been treated to a number of memorable performances, some era defining, some best forgotten (I’m looking at you, Jared Leto), but the sheer volume of different characterisations and appearances certainly says one thing; movie loving society still hasn’t had enough of the Joker. Just three shorts years after his last outing in 2016’s Suicide Squad, the powers that be decided it was time for us to meet the character once again.

Set in late 1970s/early 1980s Gotham, director Todd Phillip’s turn at the wheel gives viewers a Joker origin story, one much grittier and less comic book crazy than you will have ever seen before. We begin with Arthur Fleck (Joaquin Phoenix), a socially inept, classically ‘troubled’ man who works as an enthusiastic but unsuccessful clown for hire. Harbouring ambitions of being a stand up comedian despite being particularly unfunny, and constrained by a non existent social life centred around caring for his ageing mother (Frances Conroy), Arthur grows more and more disconcerted with the state of Gotham’s crime ridden streets. As the pressures and dissatisfaction in all areas of his life come together to create a perfect storm, the audience has no choice but to watch his slow but steady descent into, well, ‘Jokerdom’.

Here’s my key take. Joker isn’t the masterpiece that some are saying it is, it is far too reminiscent of other properties in order to be truly labeled as such. That doesn’t mean, however, that it doesn’t have a few interesting things to say and a great central performance to experience. It’s an admittedly oversimplified comparison to make, but I really did leave the cinema feeling that the film is essentially Taxi Driver with makeup, complete with the presence of Robert De Niro and the use of hand to head gun charades. I can’t imagine that touches like that are coincidental. Strip away the comic book connections and what you have is a detailed mental breakdown of a social outcast that results in violent action. Travis Bickle, anyone?

And speaking of those comic book connections, it does feel like the film is a little bit embarrassed by them. In its desire for sinister, psychological grit, it forgets the original appeal of the Joker as a super villain in the first place. All of the Batman/Wayne family references are the most awkward and out of place moments within the narrative, the film being much, much stronger when simply relying on the strength of the undeniably striking central performance.

As a singular episode in the history of an iconic character, Joker will be remembered as a more mature, stand alone instalment that prefers to tackle the inner turmoil of a fragile mind rather than anything that adds to the already well established comic book mythology. I’m aware that I’m sounding pretty negative, but I did enjoy myself as I was watching, I was just very aware that I was watching a character arc that has been portrayed in plenty of other works before. 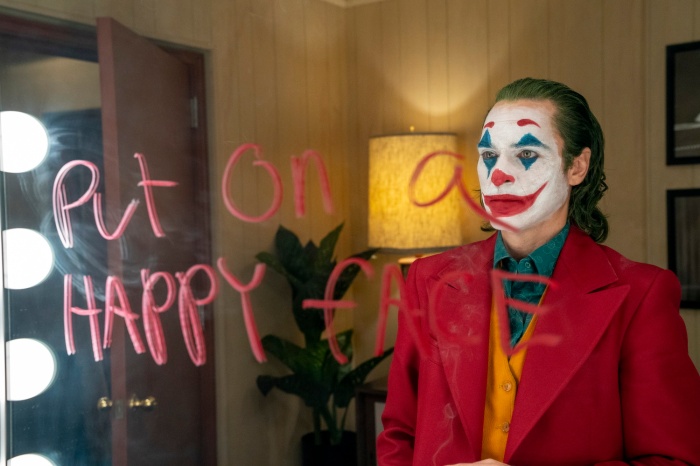 In many ways, Joker can be seen more than anything else as a juicy vehicle for Joaquin Phoenix, and when I say juicy, I’m talking Call Me By Your Name peach levels of juicy. Those who thought that defining Joker performances ended with Heath Ledger have some real food for thought here, because pretty much everything Phoenix does is alarmingly excellent. However derivative or familiar the arc of the story might feel, being taken through it by Phoenix really makes it worthwhile.

Phoenix achieves almost horror-like levels of physicality in the film, showcasing a skeletal body that somehow manages to be graceful and awkward all at the same time. From Arthur’s uncontrollable nervous laugh condition to his awkward interactions with pretty much every person he meets, Phoenix commits 100% and the conviction really pays off. Don’t believe anyone who says that the film tries to make you feel sorry for Arthur. He isn’t a sympathetic character, he is a pitiful one; there is a big difference.

Joker really does feel like a one man show from start to finish but brief supporting performances from the likes of Frances Conroy, Robert De Niro and Zazie Beetz help to flesh out the universe and flesh out Arthur’s journey. Conroy and De Niro in particular have a few moments of their own to shine, but ultimately it really does feel like each supporting character and performer is there as pawn in Phoenix’s larger game.

Overall, there isn’t much else I can say about Joker other than I liked it just fine, but wasn’t blown away like others seem to have been. The quality and conviction of Joaquin Phoenix’s lead performance is something that can’t be debated, if nothing else the film is certainly worth watching for a turn that is no doubt going to be a big consideration during awards season. It’s an atmospheric, gritty story that perhaps could have done with a few more subtle touches here and there, and it also boasts a script that feels pretty weak considering how seriously it is taking itself. I guess one man’s masterpiece is another woman’s average to good, right?