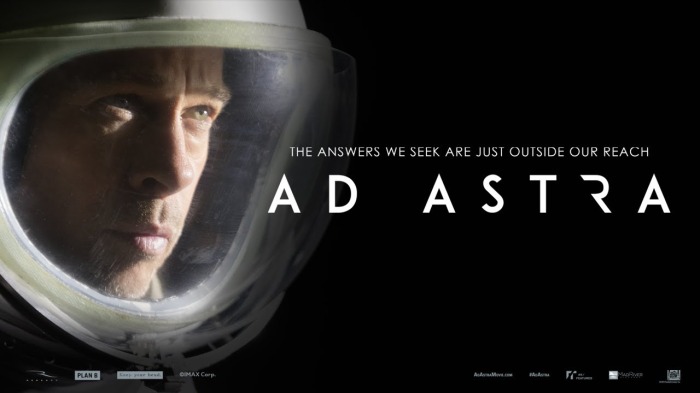 It’s fair to say that my relationship with most science-fiction is a complicated one. Though much of the actual science and genre rules tend to go completely over my head, there is something about the human themes that arise within sci-fi that I find myself drawn to. Films like Interstellar and Annihilation in recent times have satisfied my craving for human drama amidst the shiny, LED button ridden trappings of space cinema, and everything I had heard about Ad Astra seemed to be pointing in that same direction.

With all that in mind, the film should have been the perfect adventure for me, but I have to admit that though technically impressive, it left me cold, detached and overall just a little bored. Ad Astra tells the story of Major Roy McBride (Brad Pitt), an astronaut who is sent to investigate the state of the Lima Project, a mission begun some twenty six years previously that was helmed by his father, the celebrated Clifford McBride (Tommy Lee Jones). With the solar system being struck by repeated powerful and catastrophic electrical surges, and the site of Project Lima suspected as the being the source, Roy is forced not only to push the limits of known space travel, but also reckon with the memory and reputation of a hero father figure that might not be exactly what he seemed.

The first thing to say is that Ad Astra is absolutely not for you if the kind of science-fiction you like is high-octane, because with the exception of two or three punctuating action sequences, the film feels slower than a dial up modem in the late 1990s. Whilst generous critics will call this pensive and contemplative, I will go ahead and call it ponderous and patience testing.

You might remember that I didn’t have the best time with Blade Runner 2049 because it felt both endless and moody rather than atmospheric, and Ad Astra at times feels almost like a carbon copy of that very tone. In many ways, in fact, the two films are very comparable. They both feature solemn, melancholy protagonists that spend much of the narrative feeling sorry for themselves, they both tackle huge life questions in heightened environments, and in my opinion they both don’t quite succeed in the ways that they could have. It’s hard to see Blade Runner not having been an influence for writer/director James Gray, award voice over narration and all.

At its core, Ad Astra is a family drama, a story about a son working through a lot of complicated feelings about his absent father, the key difference being the feelings having to be worked out in the middle of dangerous, limit pushing space travel. The visuals are super clean and precise, and though much of the science-fiction imagery conjured has been seen before, I do give the film credit for some new (for me, at least) ideas and sequences like pirates on the moon. Yes, you heard me, pirates on the moon! Ultimately this feels very much like a case of being a film that I didn’t personally enjoy, not necessarily a film that is ‘bad’.

Just in case you forgot, I’m here to confirm and remind you that Brad Pitt is a real god damn movie star. The role of Roy McBride requires a lot of Ryan Gosling-esque silence and contemplation, and there aren’t many candidates higher on the list than Pitt for actors that you don’t mind staring at. Some are calling this the best performance of Pitt’s career, but in all honesty I’m not sure how much the role requires to begin with. Don’t get me wrong, as the star of an almost one man show, the actor holds your attention better than many others could, but even in the film’s most heightened dramatic moments the character remains composed and the performance remains restrained. It’s hard to make a really showy impact when the defining trait of your character is that he is so calm his heart rate has never risen above 80. Literally.

The likes of Tommy Lee Jones, Ruth Negga and Donald Sutherland all give solid if not particularly memorable performances as various figures on Roy’s mission. There isn’t much of a connection between father and son other than in the realms of memory and reputation, so I can forgive Pitt and Jones not having much a spark in their brief time together on screen.

Considering she is featured so heavily in the advertising that I have seen, Liv Tyler makes a laughably brief cameo as Roy’s ex-wife Eve, intended to be a strong reminder of what he is sacrificing for his extra terrestrial commitments, but so underused that the character barely makes an impact. In the grand scheme of things, this really is the Brad Pitt show, and if you are already a fan of his, you will enjoy this slightly stripped down, more melancholy side to his talent.

Overall, I just know that Ad Astra is going be hailed by many as some sort of modern sci-fi masterpiece, I think I just have to come to terms with the fact that my radar is kind of off when it comes to this genre in particular. The film is visually arresting in a really clean and ‘cool’ way, but I can’t get over the ponderous nature of the story telling, it feels indulgent and indulgent is something that tends to turn me off. See it for yourself, it’s worth the first watch at least, then you can decide whether I know what I’m talking about or not!

Drink Coffee and Carry On

Reflections of a Bay Area resident who loves books, art movies, and coffee!