Pedro Almodovar. Antonio Banderas. Penelope Cruz. All names that come immediately to mind whenever you are asked to think about the very best in Spanish cinema. Inn my mind, Almodovar’s distinctive, visionary filmmaking has come to be just as recognisable as the likes of Tarantino and Kubrick, with 2006’s Volver ranking among my favourite movies of all time. Much like the aforementioned Tarantino, the director has a circle of favoured performers that he likes to use in his work, and new release Pain & Glory features two of his most frequent and celebrated collaborators.

Pain And Glory, or Dolor y Gloria, tells the story of Salvador Mallo (Antonio Banderas), a celebrated Spanish filmmaker who appears to be in decline. Struggling with various health issues and  the inability to come to terms with the death of his mother, Salvador picks up a heroin habit, that, when under the influence, allows him to fall into memories of his childhood and his provincial upbringing with his beloved madre (Penelope Cruz).

In typical Almodovar style, Pain And Glory is a film that you can’t really pigeon hole into one specific story or narrative intention. One one hand, there is a definite ‘love letter to cinema’ angle that is explored through young Salvador’s obsession with the golden age of Hollywood, and then on the other, there is a very grounded and earthy exploration of themes like drug abuse, ill health and homosexuality. And then, on the other, other hand there is a really delicate and poignant picture of a mother/son relationship that spans the decades and turn the tables on whom cares for whom.

That sounds busy, and there is no doubting that the film does feel slightly so in its breadth of themes, but both the director and performers operate with such a light touch that every single element of the picture feels accessible and clearly defined. I’m probably not far off the truth in assuming that certain elements of the narrative are semi-autobiographical for Almodovar, a gay Spanish filmmaker of a similar age to the film’s protagonist, and you can certainly feel a delicacy and poignant protectiveness over the content.

Visually, Pain And Glory is quintessential Almodovar. Every frame is either filled with a vivid natural landscape (living in a converted cave house in 1960s Valencia), or quirky, vibrant set design full of rich colours and arresting objects (current day Madrid apartment complete with expensive art and striking accessories). Something I love about Almodovar’s work in particular is that the settings and backdrops seems to become characters in their own right, in a much more evocative way than many other filmmakers can achieve.

On the whole, Pain And Glory is a comedy drama that covers so much ground in a sub two hour runtime, yet also manages to feel light-footed and sprightly in its approach. There is something quintessentially Spanish about it, which I suppose equates to being quintessentially Almodovar. Being a fan of both of those aspects, for me the film is poignant, almost nostalgic feeling pleasure to watch. 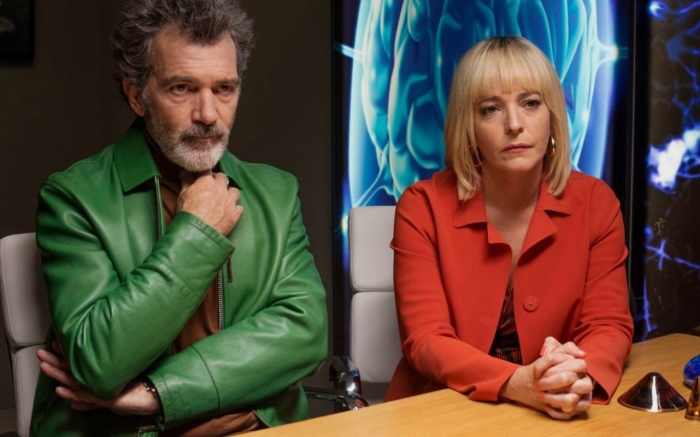 More famous to worldwide audiences for playing various heartthrobs and swashbucklers, Antonio Banderas plays somewhat against type here to career best effect. As Salvador Mallo, he is a peculiar on screen presence, half sympathetic, half infuriating, exactly the kind of mixture that one expects from a genius filmmaker type character. Everything Banderas does is quite quiet and small within the narrative, but he does it with a weight and believability that makes him a really rewarding and enigmatic protagonist to follow.

It’s no surprise that Penelope Cruz is involved in yet another Almodovar project, and as a version of Salvador’s mother in his childhood memories, she is just as charismatic and magnetic as ever. It’s not a controversial thing to say that this filmmaker gets the best out of the actress, and this is on show once again here as it is in the likes of Volver and All About My Mother. Anyone who has never seen Cruz acting in the comfort and familiarly of her native language is really missing out.

The film is packed full of stellar supporting performances from the likes of Asier Etxeandia, Cecilia Roth, Julieta Serrano, Leonardo Sbaraglia and even a brief but memorable appearance from contemporary Spanish singing star Rosalía. It’s a rich cast that feels like quality from top to bottom; there are rarely weak links in a Pedro Almodovar picture.

Overall, Pain And Glory is a pensive, contemplative film that feel deeply personal yet entirely universal at the same time. Does my Spanish heritage give me an extra affinity with the work of Almodovar? Perhaps, but that doesn’t take away from the fact that he is a master of his craft. He has given us yet another insightful and delicate picture that ponders the intricate ups and downs of life, and he even throws in a cheeky turning of the tables right at the end to keep the audience on their toes to great effect. Muchas gracias, señor!