I’ll be the first person to admit that more often than not, I am persuaded to go and see a film not because of the storyline but because of the actors in it. I am much more performance driven than director driven, and with names like Bill Murray, Adam Driver, Chloe Sevigny and Tilda Swinton front and centre here, The Dead Don’t Die was something that I know I wasn’t going to be able to miss. The problem was, though, that my last journey in the to world of filmmaker Jim Jarmusch was nowhere near as satisfying as I wanted it to be. Could this new genre piece make up for the ‘meh’ that I felt for 2014’s Only Lovers Left Alive?

The Dead Don’t Die tells the story of a zombie invasion that takes place in the fictional town of Centerville, USA. Whilst local cops Cliff Robertson (Bill Murray), Ronnie Peterson (Adam Driver) and Mindy Morrison (Chloe Sevigny) work to try to find the cause of some initial mystery killings, the rest of the town slowly but surely becomes aware that the cause of the problem is real, actual undead ghouls, apparently risen from their graves due to a shift in the Earth’s rotation.

A campy, silly premise like this certainly sounds like it has the potential to be fun, but then you have to remember whose film this is. Writer/director Jim Jarmusch has a penchant for making things so deadpan and counter reactive that, in my opinion, it ends up sucking the life out of everything in a really tedious and self indulgent way. Any traditional pleasure a viewer might take from a dumb zombie movie simply isn’t there, and whilst the aim was clearly to replace this traditional fun with a more wry, satirical edge, the fact is that the film isn’t nearly funny enough on a regular basis to make up for it.

There are are handful of occasions where this style does work, and there is a trace of charm in many of the individual performances, but as a whole The Dead Don’t Die really feels like an exercise in patience testing. You keep waiting for the thing to get into a groove but it simply never does, opting instead to stay in a sort of passive background stance that almost feels ‘too cool for school’ in a quite patronising way. You aren’t ever allowed to really get excited about the pleasingly retro looking zombie action on screen, because none of the characters are rarely ever anything more other than nonplussed.

Ultimately the film feels very cold and detached, gunning so hard for indie cult status that it completely misses the point of how fun and quirky a story like this should be. I was annoyed by the lethargic nature in Jarmusch’s Only Lovers Are Left Alive, and whilst the comic gory action of this film provides something to look at, the overall tone of the film is just as frustrating. 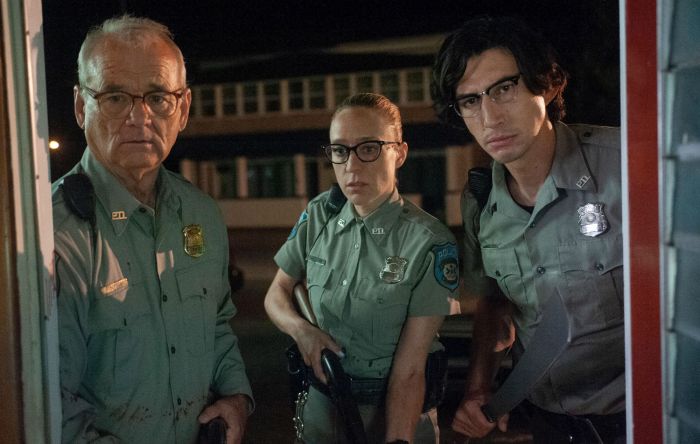 The most annoying thing about this movie is that it is such a tragic waste of the acting talent assembled. My excitement about this film, as I said, stemmed from names like Bill Murray, Adam Driver and Chloe Sevigny on the poster, but none of them are able to make a big enough impact with the material provided.

Bill Murray is usually great at this deadpan kind of thing, we’ve seen him do it a million times before, but as Chief Robertson it really feels like his natural talents are being oppressed by the restrictive nature of the direction. The character is simply ‘there’, he doesn’t really react to anything in a satisfying manner, and the same can be said for Adam Driver as Officer Peterson. I’m sure there is a notion of the human characters in the narrative being the ‘real zombies’ due to their lethargy, but that metaphor doesn’t stop the viewing experience from being a slow and exasperating one.

It’s a mixed bag for the female performers in the film too. Tilda Swinton as the eccentric Scottish coroner Zelda Winston is up to her usual quirky tricks. She plays weird perfectly and although they feel somewhat detached from the rest of the narrative, her scenes are arguably some of the most fun in the entire film. I can’t, however, forgive an ending for her character that is just straight up stupid.

The biggest disappointment is the treatment of Chloe Sevigny in her role as Officer Morrison. For some reason, Jim Jarmusch has chosen to make the prominent women the only emotional, reactionary character in the piece, and this presents itself in the form of weeping and crying whilst all of her male counterparts are still operating under this casual deadpan tone. It’s not a good look, and is a complete misuse of Sevigny who can do cool deadpan as well as any of them.

Overall, The Dead Don’t Die might be a fun idea with an absolutely stellar cast, but it’s a huge let down in my opinion. When you make a film whose selling point is that the bulk of the characters don’t look like they really care, then you need to get the tone spot on. Unfortunately this doesn’t, and as a result feels much too often like it is actively trying to annoy and infuriate its audience. Not for me, mate, not for me.