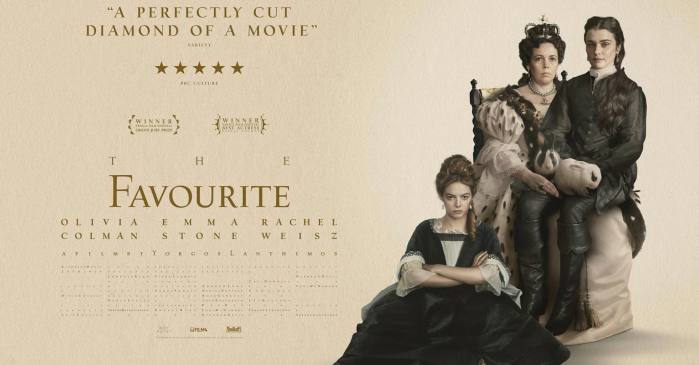 Happy New Year everybody! Christmas may have disappeared over the horizon, but for me personally, right now is the most wonderful time of the year. January ticks over and we enter full blown awards season! There are more films I’m excited to see in the next eight weeks than in the whole of the summer, and what better way to kick things off than with a picture that I had been eagerly anticipating for months?

The latest offering from acclaimed Greek director Yorgos Lanthimos, The Favourite tells the story of Britain’s Queen Anne (Olivia Colman), eighteenth century monarch and, by all accounts, grade A eccentric. Focusing on one particular theorised version of the Queen’s life, the film explores the close relationship she shared with Sarah Churchill, Duchess of Marlborough (Rachel Weisz), and the way that that relationship was destroyed by the influence and interference of Abigail Hill (Emma Stone), Anne’s new chambermaid.

Let me put it this way, I have seen a film on January 1st that I don’t think will be shaken from the number one spot on my top ten of 2019. I have no reservations in calling The Favourite a masterpiece. From the extravagance of the aesthetic to the biting satire to the interesting camera work and the force of the central performances, this is a film that feels like a truly special achievement. If you have ever seen a Lanthimos picture before, you will know that he rarely plays by the rules, and there is something deliciously anarchistic about The Favourite, almost punk rock, phrases you hardly ever hear associated with this historical period.

As the trailer suggests, the film is filled with off beat, dark comedy, excellently delivered by all involved, but a secret the filmmakers keep for the actual viewing experience is the huge sense of sadness and melancholy that the story holds at its heart. Behind the sauciness of the love triangle and the dry wit that props up the broader narrative, there is a really poignant and affecting thread of manipulation, deception, scheming, vulnerability and misplaced trust that builds through the plot to come to a really bitter end. The Favourite provides emotional highs and emotional lows in equal measure, and it is the fine balance of themes and tones that make it such a sumptuous, fascinating watch.

What is so brilliant about the film is that it refuses to abide by any of the well worn conventions of previous period pieces. The language is entirely accessible, the central themes do not feel dated, and the innovative spirit of the filmmaking succeeds in making a picture set in the stuffy 1700s feel like the freshest and most original thing on the big screen for some time. As you probably already know, one of my biggest cinematic gripes is films outstaying their welcome with an indulgently long runtime. I’m not kidding when I say that I would have been happy to spend one, two, even three more hours in the unique company and universe of The Favourite. 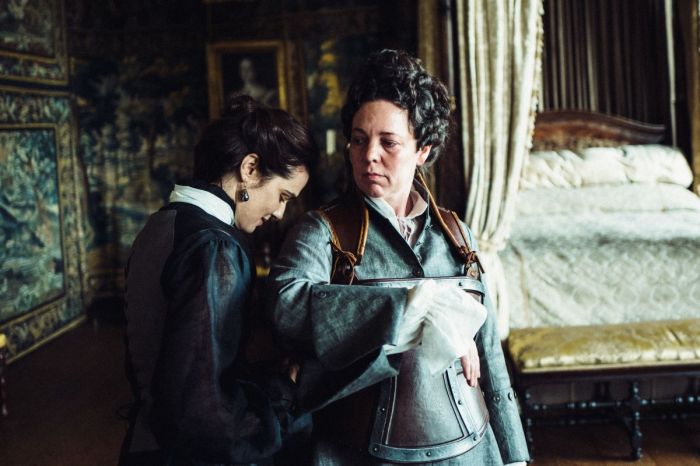 As Queen Anne, Olivia Colman gives a transformative, scene stealing performance, undoubtedly the best of her career to date. Carrying a few extra pounds and ailments on her body and a more than few extra anxieties in her mind, Colman’s monarch is a figure to be pitied for the most part, but what is so amazing about The Favourite is that it takes this mentally and physically troubled figure and infuses a genuine air of humour,  eroticism and intrigue in to the on screen proceedings. The steamy scenes Anne shares with both of her love interests are just that, achieved in a setting where things could so easily have fallen in to grotesque parody. Colman HAS to be a front runner in the Best Actress categories in the months to come. Her performance here along with Glenn Close in The Wife are the only two that have come close to being Oscar worthy for me.

With recent stand out performances in movies like Disobedience and Battle Of The Sexes respectively, Rachel Weisz and Emma Stone are continuing to make some really fantastic choices of late in the realm of LGBTQ+ content. As Sarah Churchill, Weisz is a charismatic, unafraid, beguiling on screen presence, a domineering force of nature who walks a tightrope between genuine love for Anne and a will to influence her politically. As Abigail Hill, Emma Stone shows Anne the kind of worshipping affection that she craves from the much cooler, pragmatic Sarah, providing the opposing behaviours and actions that make the love triangle aspect of the film so intriguing. The dynamic between the three leading ladies in their various combinations is awesome to watch. It is one of those excellent movies that makes female friendships and relationships feel like the most tantalising yet terrifying thing in the world.

Overall, The Favourite is a complete and utter triumph. Weirdly enough, for a film set over three hundred years ago, it feels like Yorgos Lanthimos’ most accessible picture to date. It is hilarious, it is heartbreaking, it is peculiar, it is captivating, it is surprisingly sexy. Three fantastic central performances, all of which I imagine will be challenging for major awards, are merely the cherry on top of a cake constructed from excellent dialogue, excellent directing, excellent cinematography, excellent everything. Oh, can you tell I loved it?