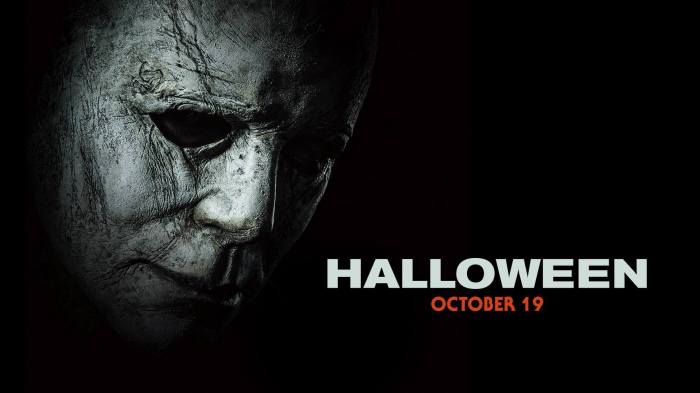 If you thought that the long and storied history of the Halloween franchise was confusing enough already, how about a direct sequel to the 1978 original that retcons every single one of the subsequent instalments and, to top it all off, has exactly the same name? I wouldn’t usually go in for this kind of grand reinvention journey with a horror series that is long past its prime, but I have always had a soft spot for the silent, stoic savagery of Michael Myers, and with the scream queen herself Jamie Lee Curtis back in the picture, I just couldn’t resist.

Like I said, 2018’s Halloween is fashioned as a direct sequel to the John Carpenter original, picking up the story forty years after that fatal October 31st night. After four decades back in a maximum security facility, iconic killer Michael Myers escapes during a bus transfer and makes his way to Haddonfield, presumably to finish what he started and killing anyone and everyone on his way. The audience learns that target Laurie Strode (Jamie Lee Curtis) has lived a reclusive and anxiety filled life since the infamous event, two divorces deep, estranged from daughter Karen (Judy Greer) and granddaughter Allyson (Andi Matichak), and residing in a guarded compound where she has spent her life training and preparing for what she believes will be a final and inevitable confrontation with the ‘the boogeyman’.

Halloween is nowhere the near the worst instalment in this crowded franchise, but it isn’t particularly good either. In fact, it’s probably about as average a horror movie as you will see all year. If you have seen even twenty minutes of any of the previous films, then you will know exactly what to expect. In terms of story and violent action, the movie shows us nothing that we haven’t seen before, but then again, can you criticise a film for being trope filled when the series in which it exists invented most of the them in the first place? There is no denying that there is a visceral thrill in watching Michael Myers go about his routine, crushing heads, slicing necks, managing to take the kind of damage that would mortally wound every other being on this earth. It’s nice to see that he still has a penchant for pinning teens to walls like tails on a donkey.

There is plenty of tense fun to be had, but rather detrimentally, nothing much truly scary happens. If jump scares are what you are looking for, then the film has you covered, but in terms of real terror, I can’t say I was ever fully shook. Ultimately, I can’t help but feel that if not for the high profile connections and references to the groundbreaking and beloved 1978 original, this new addition to the Halloween universe would not being receiving the kind of hype that it is. Chief among these connections, of course, is Jamie Lee Curtis, who in my opinion makes the entire thing. 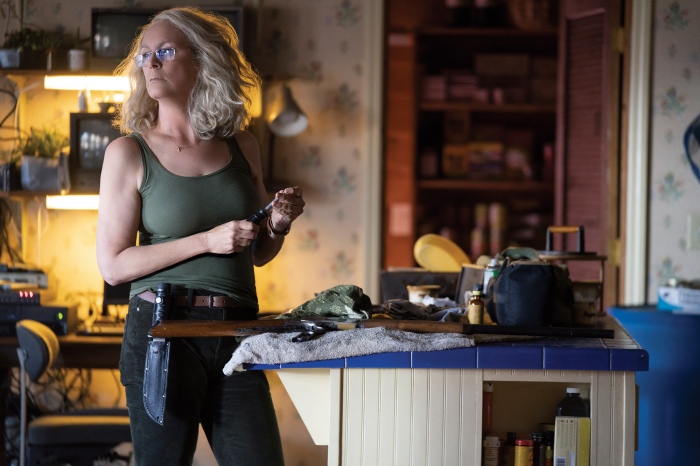 Curtis simply *is* Halloween, in my opinion. The franchise lives and dies on her involvement, and it’s no surprise that the stronger sequels have been those involving her as a protagonist (my inner ten year old will fight anyone who doesn’t hold Halloween H20 in very high esteem). In 2018, we are treated to a different kind of Laurie Strode, one who strikes immediate similarities to Linda Hamilton’s Terminator 2: Judgment Day version of Sarah Connor. She’s older, greyer and ready to end this shit here and now, and I am absolutely here for it. What I love the most is that Jamie Lee Curtis is proud of her place in this genre’s history, and it shows in the integrity of her performance even when things get a little ‘extra’. You will never hear me complaining about her Laurie Strode.

Sharing the limelight this time are Judy Greer and Andi Matichak as her daughter and granddaughter. Both give solid performances, and it is nice to see a different take on the ‘final girl’ dynamic, a trio of Strode women coming together to battle a male presence that has haunted and ruined their family for generations. Don’t get me wrong, there is still plenty of hacky, cliched sexy teen slashing provided by the slaughter of Allyson’s high school friends, but the film, in my opinion, definitely benefits from Curtis’s older age and narrative history. Could this version of Laurie Strode be the oldest ‘final girl’ in horror film history? If so, I can’t think of any character or actress more fitting of the honour.

Overall, Halloween isn’t great, but equally it isn’t bad either. If you are a fan of the franchise like I am, then it is certainly worth a watch. An average slasher that is made more special by the presence and performance of one of the genre’s greatest stars. At this point in the continuity timeline, the series feels more like a choose your own adventure. Whilst I might choose this double bill adventure over the muddy waters of four, five and six, I can’t help still loving and preferring the direction taken by H20. Sue me!