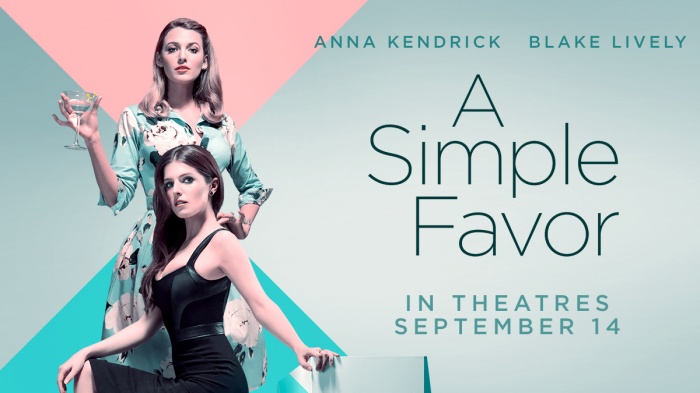 It would be fair to say that director Paul Feig has been very much at the forefront of a female centric comedy films for the past decade. With films like Bridesmaids, The Heat, Spy and Ghostbusters to his name, it is clear that Feig is in his element when collaborating with talented actresses, telling funny stories, but could he produce similar results when faced with a darker, more sinister set of themes and subject matter? There was only one way to find out!

Based on a 2017 novel of the same name by Darcey Bell, A Simple Favor tells the story of a ‘mommy vlogger’ named Stephanie (Anna Kendrick), whose life is significantly changed and complicated when she befriends the coolest, most mysterious fellow mom at school, Emily Nelson (Blake Lively). When Emily goes missing after asking Stephanie to pick her son up from school one day, Stephanie goes on a mission to investigate what has happened to her friend, and in true thriller fashion, she uncovers much more than she ever expected.

If you want to get straight down to it, A Simple Favor is a great example the fact that some films can be a whole heap of fun and entertainment, whilst simultaneously not being that critically impressive. There are some clear Gone Girl vibes at the heart of this story, but the narrative is much more darkly comic, doesn’t take itself too seriously, and therefore is able to get away with the bulk of fairly ludicrous twists upon twists that take place in a chaotic final third. The content might be a million miles away from Bridesmaids, but there is undoubtedly a strong Paul Feig-esque quality to proceedings. The film doesn’t necessarily contain the levels of vulgarity and slap stick gags of his previous comedy hits, but it certainly shares that feeling of a director who seems to be able to get the best out of his leading ladies, and knows exactly how to make them shine.

Ultimately, one’s enjoyment of this film is going to depend entirely on how silly you are feeling and how much of a ride you want to go on. You can physically feel the page turning nature that the original novel no doubt had, but that doesn’t always make for the most nuanced cinematic story telling when you only have ninety seconds to portray something that has the benefit of ten or fifteen pages in a chapter. The film contains a combination of generic tropes and plot points that audiences are used to, suspicious life insurance claims, secret families, affairs, all that jazz, but the difference here is that there is a sheen of quirky fun over everything that makes it feel somewhat fresh. I’ve seen a fair few missing person movies in my time, but never one quite like this!

A Simple Favor is boosted by fun performances, and these fun performances are what keeps the film utterly watchable even in its silliest, eye rolling inducing moments. As Stephanie, the repressed single mom with a mildly popular vlogging channel, Anna Kendrick is at her awkward and adorable best. That’s to begin with, at least. As the narrative progresses, Kendrick is challenged with altering her characterisation, and she does so to entertaining effect. Kendrick is one of the best around right now at executing that insecure, quiet sort of comedy, it’s a real skill to be able to execute it without being too annoying in my opinion!

I have seen Blake Lively in a few different things before, but this is definitely the first time that she has made a lasting impression on me. As the mysterious, enigmatic Emily, she really does steal every scene in which she appears (which to the detriment of the film, is probably less than all of the other central characters). To steal a phase from the great TLC, Lively plays it crazy, sexy, cool, and I’ll tell you this, she sure can wear the shit out of a suit. Rivalled only by Cate Blanchett in Ocean’s 8 for this year’s biggest on screen, bad ass bitch, suit wearing heartthrob.

It is clear to see that the two actresses are having a great time together, and that makes for fun and interesting chemistry on the screen. Lively’s effortless charisma and magnetism contrasts really well with Kendrick’s initial uptight ‘nerdiness’, and the two characters play off of each other to really enjoyable effect. Even if the minutiae of the plot doesn’t float your boat, watching these two do their respective thing is a lot of fun.

Overall, A Simple Favor is a weird but kind of wonderful dark comedy, if your kind of wonderful is zany plot twists and character motivations that shouldn’t be inspected too harshly. It’s certainly more stylish in its aesthetic than its story telling, but that doesn’t make it any less watchable. Some might (fairly) disregard it as being too contrived, especially in the final third, but there is just something about this one that made me smile. A new guilty pleasure for sure.