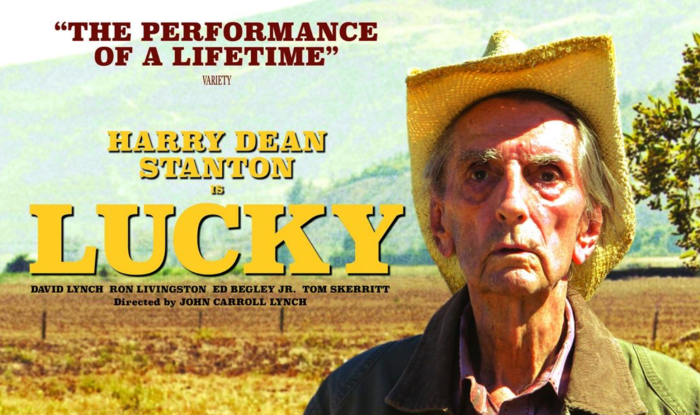 From Pretty In Pink to The Green Mile to Alien to Christine, it feels like Harry Dean Stanton is one of those figures who has always been present in my cinematic memory, not necessarily stealing the show every time, but popping up in both indie and mainstream delights, some of which are firmly woven in to the fabric of my love for film. Almost a year ago to the day of his death at the grand old age of 91, it was finally time for me to watch the seasoned and celebrated actor take unprecedented centre stage in Lucky, the first of two remaining pictures that he left in the can before his passing.

The film tells the story of an old man named Lucky (Harry Dean Stanton), the elder statesman of a sleepy California desert town who after a fall, is forced to come to terms with and start to face the subject of his own mortality. An eccentric himself, and surrounded by a community of equally eccentric neighbours, the film takes the audience on a quirky, contemplative, careful journey of self discovery, as Lucky has various encounters with characters that help to provide him with a new or different perspective, some hilarious, some melancholy, some joyful, some heartwarming, some heartbreaking. All excellent.

The film revels in the darker side of comedy, with lots of humour being extracted from the subject of death, but alongside this, and what I think makes Lucky so magical, is the overwhelming note of kindness and heart that it possesses. There is no central antagonist  in this story, no villain to cause havoc that has to be defeated. In fact, you could say the very opposite. As the news of Lucky’s fall spreads across town, the reactions are all of concern, concern that he isn’t necessarily willing to accept to begin with, but concern and love that comes through the screen and seeps in to the heart of the viewer. The film would have been poignant enough on its own, but given the real life context of Stanton’s death, it really left me with a lump in my throat.

In true indie dramedy fashion, Lucky isn’t necessarily a film that is going to satisfy the kind of viewer who is looking for neat bows on top of fully wrapped parcels. It’s a slice of life picture with an undoubtedly quirky edge, you don’t need surprise reveals and shocking twists to tell the kind of story that Lucky is telling. It’s a perfect example of a comedy that can be irreverent and slightly dark, but that can also have a beating, bursting heart. You don’t always have to play things as cold as ice to evoke cool, off beat humour.

The film boasts a truly wonderful cast, but there is no other place to start than with Harry Dean Stanton. As far as I can recall, he features in every single scene of the picture, and gives the kind of performance that says more in its silence than in its dialogue. That’s not to say, however, that his dialogue isn’t top notch. Sure, I might have some melancholy grief induced bias in this particular instance, but I honestly can’t think of another actor more suited to the role of Lucky. Stanton plays the character fragile but strong, confident but vulnerable, brash but gentle, pretty much any emotional contradiction you can think of, he manages it. To still be so enigmatic and in command of a scene at 91 is a wondrous thing. Lucky is an old, old man with a young, young spirit, and Stanton perfectly embodies him. The posthumous awards he won for this role were not out of sorrow and reverence, they were fully deserved.

Playing small but vital roles in the Harry Dean Stanton show are the likes of Ron Livingston, Ed Begley Jr., Tom Skerritt, Beth Grant and James Darren, all providing familiar faces that add to the sense of close community that the film evokes. A particularly special mention goes to David Lynch, who once again switches from sitting behind the camera to standing in front of it. Playing a town resident named Howard, Lynch produces the film’s biggest side plot (a missing pet tortoise called President Roosevelt), and also produces some of the most powerful, touching and memorable dialogue of any character in the film. On this showing, I’d love to see more of him in future projects.

Overall, Lucky is a film that crept up out of nowhere to absolutely take me by surprise. The overwhelming vibe of kindness within a diverse community is really beautiful to see play out, especially in times like these when it sometimes feels like we are more divided then ever. A super impressive directorial debut from John Carroll Lynch. A fitting and poignant farewell for Harry Dean Stanton. A quiet little movie with a huge emotional intelligence. In fact, the more I think about it, the more I love it. And I loved it a lot to begin with. Low key emotionally devastating yet life affirming at the same time. A real gem.