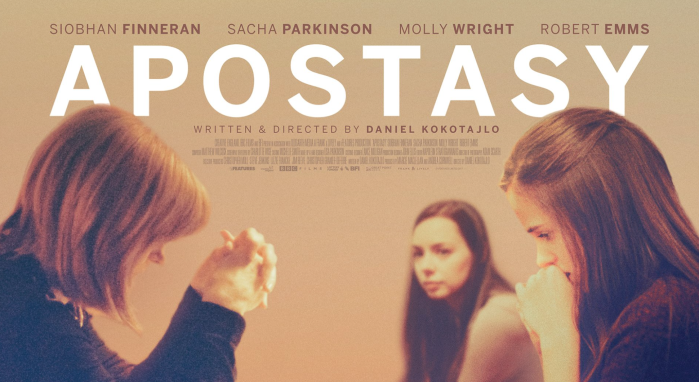 Happy August everybody. Nothing says ‘it’s the school holidays and cinemas are being overrun with Marvel films and children’s animations’ than a good old fashioned trip to the small, five row fifth screen at my local multiplex! Though I’ve done my fair share of blockbustering so far this summer, I thought it was about time that I went back to my roots and sought out a little home grown, indie flavour to balance things out. This balance was provided to me in the form of Daniel Kokotajlo’s feature film directorial debut, Apostasy.

Set in northern England, the film tells the story of a family of Jehovah’s Witnesses, and the tensions and turmoil that arise when daughters Alex (Molly Wright) and Luisa (Sacha Parkinson) both begin to question their faith in different ways, much to the confusion and dismay of their deeply entrenched mother Ivanna (Siobhan Finneran). The first thing to say is that Apostasy wins a prize for showing me something I don’t think I’ve seen in film before, a Jehovah’s Witness story told from a British perspective, it isn’t a religion I immediately associate with the United Kingdom, and to watch this quintessentially English take on the themes was really interesting and infuriating in equal measure.

With extreme close ups throughout and a deliberate slow pace to evoke both the claustrophobia of the character’s situations and the stagnation of their repressed lifestyles, the film provides a really visceral and on many occasions physically uncomfortable viewing experience. The central theme of the strength of one’s extreme faith versus the love of one’s family is something that refuses to let you stay on the fence, and the painful family drama that unfolds is so raw and so consequential that every single little character choice feels like it carries the weight of the world. It makes for a draining but engrossing watch.

It is interesting to watch Apostasy so soon after reviewing First Reformed. Whilst the latter presents a man whose concerns about the ‘real world’ come to interfere with his deep faith, the former gives the very opposite in Ivanna, a mother who is conflicted but ultimately can’t allow herself to break from her religion, despite the physical and mental toll it takes on her daughters. Ethan Hawke’s Reverend Toller left me with a complicated, no doubt problematic, yet weirdly insightful view of how people of faith can adopt concerns and understanding outside of their teachings, whereas Siobhan Finneran’s Ivanna left me raging at the ignorance and real world blindness that extreme religion can cause in its followers.

The sign of a good film is when a viewer can relate to a story with which they have no personal connection or attachment. Even as a person with absolutely no association to Jehovah’s Witnesses, the family drama, thematic tension and overbearingly sombre tone that Apostasy revels in from start to finish gives the audience no choice but to be carried along for the intense ride.

The film is helmed by three really diverse and devastating performances by the acting members of the Whitling family. As a trio, the actresses almost come to represent the ‘Goldilocks and the Three Bears’ of faith. On one end of the spectrum you have Sacha Parkinson as Luisa, the pregnant and excommunicated older sister, who perfectly evokes the combination of forced independence and desperate need and longing of somebody forcibly removed from their previous comfort zone. In the middle is Alex, the younger sister played by Molly Wright whose faith is strong but ever so slightly wavering in the face of her sister’s ostracism and her own complicated illness. Wright takes the role of audience surrogate for much of the film, and there is an exquisite agony in the confusion and apprehension that she begins to portray as the narrative progresses.

Completing the ‘three bears’ is Siobhan Finneran, who gives a quietly sensational performance as matriarch Ivanna. Unable to break from her Jehovah’s Witness doctrine, Ivanna is left with little choice but to watch her family unit crumble before her eyes, and the desperate stoicism that Finneran evokes is genuinely unsettling at times. It’s hard to inspire sympathy in a character whose own bad choices are ruining not only their life but the lives of others sympathetic, but somehow Finneran manages to do that. Her nuanced performance adds more than one or two different layers to the film, making a genuinely intriguing and endlessly complicated protagonist out of a character who could so easily have been seen as a two dimensional villain. I fear that Apostasy will fly well under the radar of most awards bodies this year, but Siobhan Finneran certainly wouldn’t be out of place in any Best Actress category.

Overall, Apostasy is a challenging, frustrating but ultimately rewarding film that shines light on a subject and setting combination that audiences won’t be overly familiar with. It ticks all the boxes in terms of performances and thematic tension, and if you can come to terms with what I like to call ‘classic British drama’ pace, the slower, quieter burn, then there is a lot to digest and to think about long after the credits have rolled.