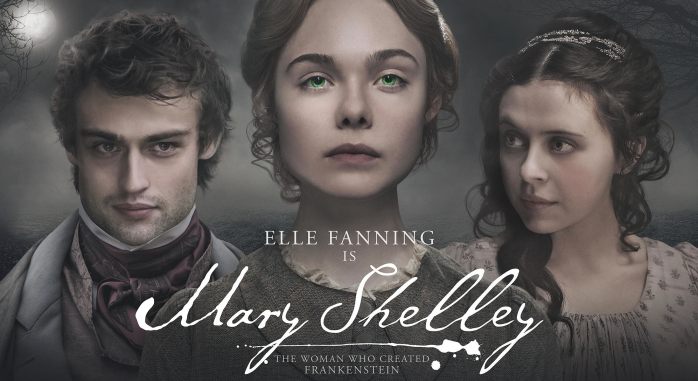 I don’t know about you, but I’ve always been fascinated by the fact that the real life story of Mary Shelley, author of the ground breaking, genre defining, genre inventing in fact, novel Frankenstein, was even more complex and compelling than the gothic science-fiction tale that she penned whilst still only a teenager. We tend to regard the ‘olden days’ as a time filled with prim and proper lifestyles and chaste romance, but Shelley’s early years were anything but. I was hoping that this latest biopic would bring that rebellious and unconventional spirit to life.

The film tells the story of the then Mary Wollstonecraft (Elle Fanning) in the formative coming of age years of her life. Brimming with rebellion and resistance from a troubled relationship with her step-mother, Mary’s life is turned upside down by the introduction of Percy Shelley (Douglas Booth), a handsome roguish poet who sweeps the teenage girl off of her feet and provides an escape for both her and her sister Claire (Bel Powley). Living in sin and under the constant shadow of scandal, the trio lead lives of relative debauchery, running from debt collectors and spending drink and drug fuelled months with the likes of Lord Byron, until finally Mary’s sorrow and loneliness find their way on the page in the form of the metaphorical Frankenstein’s monster.

Mary Shelley is a perfectly serviceable biopic in the great scheme of things, but there is definitely a sense that the film fails to make the most of its compelling true life tale. For some reason, rather than feeling revolutionary and trend bucking, the way that Mary’s life events play out on screen feel somewhat processional and, dare I say, dull? There is certain point in the proceedings where one could argue that the film becomes more a project to redeem Percy Shelley’s reputation for the way he treated his lover than a story about how an author came to write one of the greatest novels of all time. The character of Mary becomes disappointingly passive for much of the narrative, and though this is more than likely a deliberate choice from the scriptwriter to show the dark places she found herself in, it does result in a lack of focus on the rightful protagonist.

And on the subject of the writing, I will say that there are moments and passages in the film that feel distinctly stilted and awkward, perhaps a little too ‘showy’ to match the feel of Shelley’s prose when in fact real life conversations might have warranted some less flowery dialogue. As I mentioned briefly above, it is refreshing an interesting to see a story set in this time period that isn’t beholden to the chaste societal conventions of the day. From free love to illegitimate children to a spotlight on the more radical lifestyles and choices of the early 19th century, Mary Shelley adds a different kind of dynamic to the Victorian period dramas that we are accustomed to. Ultimately, though, it’s a shame that the film couldn’t have been more impressive.

Elle Fanning pretty much impresses me in everything she does these days, and her portrayal of Mary Shelley is no exception. Fanning brings intrigue and charisma to the film even in it’s more plodding and slow paced moments. She possesses that enigmatic spark that you would assume a teenage runaway, rebel and visionary mind would have to have in Georgian England. She gives a better performance than perhaps much of her dialogue deserves, definitely elevating the picture to something that feels more than the some of its parts.

It might sound counter intuitive to say so, but Douglas booth is almost too good looking for his own good as Percy Shelley. His delicately mussed hair and chiseled features make him feel almost like a Mills and Boon creation, but despite this he still puts down a fairly solid if not slightly middling performance as the complicate poet. Together the two central actors do share a pleasing chemistry, a vital component that would have had the film falling completely and utterly flat otherwise.

A handful of decent supporting roles are provided by the likes of Bel Powley as sister Claire Clairmont and Stephen Dillane as father William Godwin, in fact every cast member does rather well with the exception of poor Tom Sturridge, who gives a brief but overbearing portrayal of Lord Byron that borders on the wrong side of parody. I’m talking guy wearing type parody.

Overall, Mary Shelley stands as a well made if not spectacular introduction for those who have never sought to peek behind the curtain of the iconic author’s life. Certainly not gospel, and with more than a touch of timeline creative license taken, the film gives a solid but not defining insight in to the young Mary Wollstonecraft. It might provide you with some interesting context the next time you read Frankenstein, but the beauty of truly great literature is that, at the end of the day, it stands for itself.