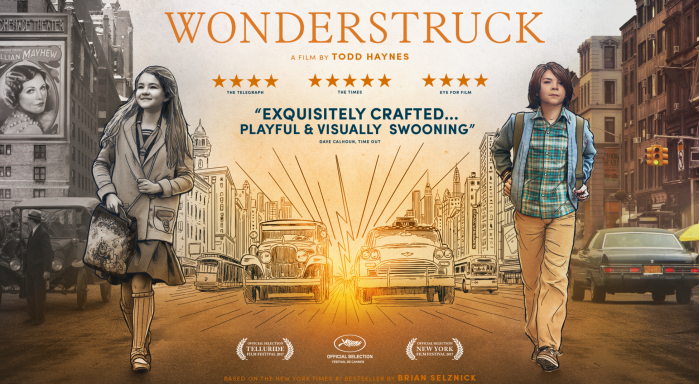 Is it just me, or did Wonderstruck, Todd Hayne’s latest directorial offering, have one of the most confusing and misleading trailers of all time? Perhaps I was tired when I watched it, perhaps I’m just a dummy, but I honestly went in to the film expecting to see some sort of time travel, multiple lives lived, wrinkle in time (not, god forbid, actually A Wrinkle In Time) type adventure. In my head, the two child leads were the same actor, which in hindsight now, seems incredibly foolish. I’m pleased to report that rather than being some sort of science-fiction fantasy, Wonderstruck was much more aligned with my personal taste.

The film tells the interconnecting stories of Rose (Millicent Simmonds), a deaf girl in the 1920s who runs away to New York to find her actress mother Lillian Mayhew (Julianne Moore) and Ben (Oakes Fegley), a recently deaf boy in the 1970s who does the very same in search of his mystery father following the death of his mother (played by Michelle Williams). As things unfold, we soon come to see that these tales, separated by time, lead to a larger family saga with secrets and reveals along the way.

In many ways, Wonderstruck is a rather pedestrian, run of the mill mystery drama, but there is something about the endearing cast (mostly children) and the sincerity of the plot and execution that evokes a lot of warm feeling towards it from me. I’m not usually the kind of person who has nice things to say about movies that are simply ‘pleasant’, but I guess this one caught me just at the right time. At its core, it is a story about those who don’t necessarily ‘fit in’ finding a place for themselves amidst their struggles, and there is something very pure about the way that in which the film portrays that theme. In a technical sense, the 1920s scenes are presented in black and white, in a silent movie style of exaggeration that echoes the love Rose has for that form of cinema, a form that doesn’t exclude her from understanding. More recently hearing impaired from a freak accident, Ben’s 1970s version of New York is a mix of manipulated, muffled sound and clear speech depending on character perspective, and though the choices from both eras could have come across a little too on the nose, it felt pretty much pitch perfect to me.

Fitting with the title, there is a sort of sense of childish wonder that can be felt throughout the film. The museums of New York City play a big part in both the mystery of the main plot and the setting of a tone and atmosphere, and to be honest, any film that includes a classic ‘kids spending the night alone in a museum’ sequence is already on to a winner for me. In the very nature of Wonderstruck, the tweeness and sincerity of the film, there was a danger that the entire thing might just have been too saccharine and mawkish. Don’t get me wrong, there is a high level of sentimentality throughout, but under the control of director Todd Haynes, the picture remains at a palatable level of sugary. 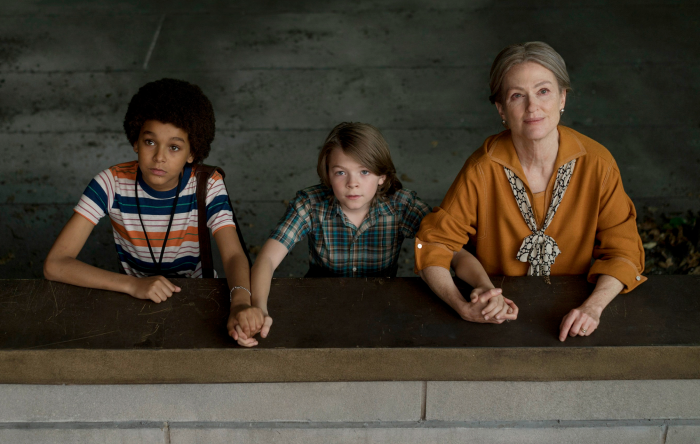 The cast is a solid one, from the child actors to the more prolific adults performers. Millicent Simmonds looks to be having a big breakout year, with a great performance as Rose here and her role in the critical hit A Quiet Place (review to come!). The deaf actress has a great presence about her, proving to be a really endearing focal point in the black and white, silent movie-esque sequences of the 1920s narrative. As Ben, Oakes Fegley is equally endearing. The impact of the unfolding mystery of the interconnecting tales rests on his shoulders, and for such a young performer, he deals with the drama very well. Both children come across as seasoned, but not grating, performers already, which bodes well for their future careers.

Touches of star quality are brought to the film by the likes of Michelle Williams and Julianne Moore. As Ben’s mother Elaine, Williams make a big impact in her brief time on screen, really helping to capture the 1970s aesthetic that encapsulates that portion of the story. Julianne Moore is tasked with playing two different roles, and though a few brief moments of confusion reigned (echoing my similar confusion with the trailer!), the decision for her to play both Rose’s silent movie star mother and then an older version of Rose herself is an interesting and oddly fitting one.

Overall, Wonderstruck is an unassuming little mystery drama that feels like the kind of family film that rarely gets made anymore. It’s not the most exciting or most complete feeling picture you will see, but there is just something rather enchanting and comforting about it that makes it a really enjoyable and endearing watch. Don’t let the trailer fool you like it fooled me, the film is nowhere near as messy and disorienting as it is presented as being!