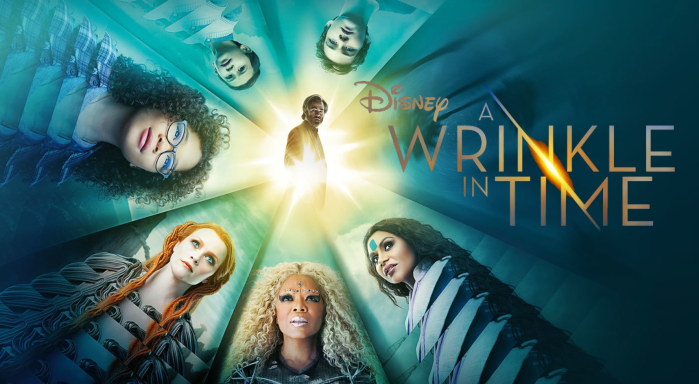 Before entering the cinema, the only thing I knew about Disney’s latest live action adventure was that it is an adaptation of a 1962 novel by Madeleine L’Engle, a novel that was famously believed to be unfilmable thanks to its abstract concepts. If the world has taught me one thing, it is that if something seems impossible, the best thing to do is get Oprah Winfrey on board! With A Wrinkle In Time marking the first ever nine figure budget film directed by a woman of colour, Ava DuVernay, the picture has already made history, but would it be as memorable as its behind the scenes triumphs?

The film tells the story of Meg Murry (Storm Reid), a young, gifted girl who is struggling to cope with the disappearance of her father (Chris Pine) four years ago during his experimentations with theoretical time travel and its various dimensions. Alongside her equally gifted little brother Charles Wallace (Deric McCabe) and new school friend Calvin (Levi Miller), Meg embarks on a journey through time and the universe to search for her dad, aided by three eccentric astral travellers called Mrs. Which (Oprah Winfrey), Mrs. Whatsit (Reese Witherspoon) and Mrs. Who (Mindy Kaling).

If that brief plot summary sounds bonkers to you, it’s because it absolutely is. A Wrinkle In Time is as ambitious and well intentioned a film as you are ever likely to see, but I’m afraid it falls very much in to the category of noble failure. I stand before you, a 28 year old grown woman, who could grasp perhaps only 35% of what was actually going on for much of the narrative. Our cast of quirky and courageous characters hop from one expansive, visually appealing landscape to another in search of Alex Murry, but rather than meaningful plot progression the bulk of this action feels more like a chance for the CGI team to flex their muscles. The film is fun from an aesthetic viewpoint, there’s no doubt about that, but the sheer amount of plot holes that start to build up over the course of the story are just too much to take, not to mention the fact that what is actually being said and done within the visual wonder is, well, rather boring.

I understand that Madeleine L’Engle’s novel has a distinct theme of Christianity and it’s branching messages within the story, and it seems as though the film has left out this particular angle. Could it be the case that by removing the core message of the story, the narrative that is left feels a little vapid? Perhaps. I certainly didn’t pick up any overt religious tones, just a final third culmination that abides by the ‘love saves the day’ kind of structure, that, quite frankly, I find a bit too cringeworthy and saccharine.

Arguably, the one thing that A Winkle In Time does get 100% right is its diverse and talented range of cast members. We get see different genders, different ethnicities, different ages and different shapes and sizes all together in a big Disney adventure, and that is certainly refreshing to see. As protagonist Meg, Storm Reid gives an admirable and confident performance. At just 14 she commands a $100 million dollar movie with great assurance, and acting alongside screen giants like Oprah and Reese Witherspoon didn’t seem to phase her at all. Young Deric McCabe as little brother Charles Wallace gives a prodigious if not slightly too precocious performance, forcibly stealing every scene in which he appears, but hey, he’s only 9, and the character required it, so whilst it might not have been the most enjoyable thing to watch, he certainly hit the brief and then some.

Speaking of our three astral travellers, Winfrey, Witherspoon and Mindy Kaling are all interesting choices for their respective roles, and although the film never really gives them a chance to be anything more than quirky, backseat drivers, all three actresses give the film a star quality back bone that it really needs to help the younger performers along. Like I said, the casting in all areas was strong and commendable, it’s just a shame that the condensed material they had to work with didn’t produce a good enough final product.

Overall, A Wrinkle In Time feels like a lot of visual spectacle to disguise some ropey story telling. I didn’t enjoy it, but I’m never going to be really spiteful about a film that aims high and misses. It’s an ambitious sci-fi fantasy adventure, and nobody can dispute that, but in all honesty, the experience of watching the film is more baffling than anything else. It seems as though the only thing I knew about the property before entering the cinema is the one thing that I felt most strongly upon leaving, this really is a story that might be unfilmable.