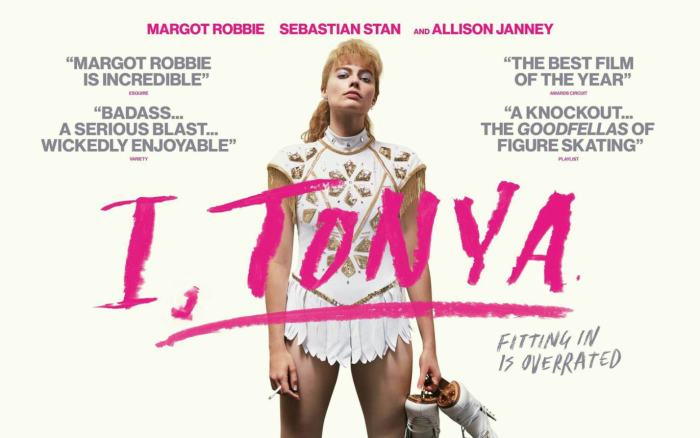 As someone who grew up in the 1990s harbouring a growing love for sports of all kinds, the story of Tonya Harding and Nancy Kerrigan was one that I knew in very broad strokes, most of which were extremely untrue. Rather than Harding, the redneck rebel of the figure skating world, taking a baseball bat to the knees of her closest rival Kerrigan like I imagined, the story is much more nuanced and complicated than that. It is a story so unbelievable that if it weren’t part of modern history, I wouldn’t believe it myself. I couldn’t wait to see events play out on the big screen.

I, Tonya tells the multi-perspectived and unreliably narrated tale of the life and career of Tonya Harding (Margot Robbie), once the best figure skater in the world and the first American woman ever to land a triple axel jump, the holy grail of figure skating tricks. The film takes you on a journey through Harding’s bleak, abusive childhood at the hands of monster mother LaVona (Allison Janney), to her abusive marriage with ex-husband Jeff Gillooly (Sebastian Stan), to the fateful incident involving an assault on Nancy Kerrigan (Caitlin Carver) in the run up to the 1994 Winter Olympics.

The first thing to say about I, Tonya is that it is an absolute riot, a brilliant piece of filmmaking that combines black humour, drama and sporting tension to thrilling and unique effect. A recent review of the picture proclaimed it to be the Goodfellas of figure skating movies, and I can’t think of a more apt and accurate description. Those who arrive seeking a balanced, journalistic retelling of events will be sadly disappointed, as instead of sticking in more traditional biopic lanes, the film leans heavily in to the nature of the unreliable narrator to produce something that poses ethical and moral questions at every corner. Based on directly opposing recollections of events from both Harding and Gillooly, I, Tonya takes delight in employing techniques like breaking the fourth wall in order to wedge in as many differing opinions and statements as possible. In fact, for a film that deliberately incorporates so many different perspectives, it is an amazing achievement that the overall narrative flows so smoothly and enjoyably for the audience.

I can’t profess to being an expert on the real life case, but there has no doubt been a degree of sugar coating and detail avoiding in order to provide Tonya Harding with a redemptive arc both in the film and in real life. She has since made fluff piece appearances on platforms like The Ellen Degeneres Show, with the clear intention being an effort to redeem her reputation much like Sarah Paulson’s work in The People v. O. J. Simpson: American Crime Story did for Marcia Clark. The difference being, however, that one tried to convict a guilty man of murder, and the other was involved, perhaps more deeply than she would like to admit, in the vicious attack of a professional peer.

The thing is, though, that I didn’t come here for a straight laced documentary. I came with the expectation of a darkly comic, searingly funny, arrestingly visceral, morally ambiguous, bat shit crazy movie presenting a stylised version of one of the most legendary sporting controversies in the last fifty years, and that’s exactly what I got. With bells on.

As Tonya Harding, Margot Robbie is nothing short of sensational. What on the surface might seem like a campy, dialled up, no sweat performance becomes intrinsically more complex and nuanced when you consider the fact that not only is Robbie playing Harding from Harding’s perspective, but she is also at times playing her from Gillooly’s perspective whilst working to maintain the credibility of the character in the overall scheme of things. Add in the fact that she portrays Harding at three vastly different ages throughout the film, each time excellently, and you’ve got a truly stellar turn on your hands. For the most part she plays it redneck and raucous, but there are a couple of monologues delivered by Robbie towards the end of the film that feel like true gut punches. Speeches from the heart that remind the audience, no matter Harding’s level of complicity, that she was a woman, very much the victim of extreme circumstance from the start, whose life was utterly ruined and restricted by the events of 1994. All of this, too, whilst becoming becoming a pretty darn good skater in the process. A really amazing performance, perhaps my favourite of the entire awards season.

It’s no secret at this point that Allison Janney has the Best Supporting Actress Oscar race all sewn up. As LaVona Harding, she is arguably the most monstrous mother committed to screen since Monique’s own Academy Award winning performance in 2009’s Precious. Janney is one of only a few actresses who could pull of the insane task of being one of the main sources of abuse in the film yet also one of the main sources of humour. Her appalling actions and acid tongue are both enthralling and horrifying to watch. My last cinematic outing, Lady Bird, provides an interesting companion piece to I, Tonya. Whereas the former presents about as natural and relatable a mother/daughter relationship as you are ever likely to see on screen, the latter is reversely about as unnatural and toxic as it gets. The part was specifically written with Janney in mind, and if she doesn’t walk away with the statuette on March 5th, I’ll eat the nearest hat.

Overall, I, Tonya is a brilliant film. One that is perhaps not entirely aligned with the cold hard truth of the real life events on which it is based, but nonetheless a film that provides an exceptional two hours of cinematic entertainment. The picture provides a welcome break from the usual kinds of ‘biopics’ that receive awards praise around this time of year (Darkest Hour, I’m looking at you). I love a film with a bit of bite to it, and I, Tonya has enough bite to chew through the very hardest, coldest layer of ice imaginable. A visceral, acerbic, shamefully humorous retelling of one the most unbelievable careers and controversies in sports history.