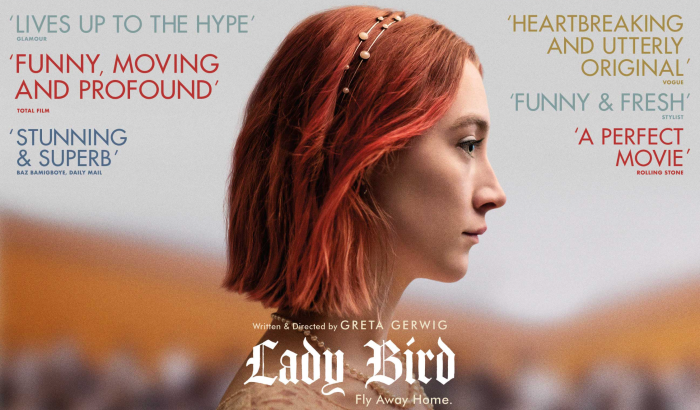 Being much closer to thirty now than any of my precious teen years, the world of ‘coming of age’ cinema is something that I tend to only want to revisit with the promise of some really high quality content. In the case of Lady Bird, attached names like Greta Gerwig, Saoirse Ronan and Laurie Metcalfe were certainly enough to pull me in, along with the fact that the particular early 2000s time period of the picture coincides quite nicely with my own coming of age memories. And let’s not forget, Lady Bird arrives on British screens on the back of no fewer than five Oscar nominations, all in ‘major’ categories.

The film tells the story of Christine McPherson (Saoirse Ronan), a strong willed, artistic Catholic high school student with a rebellious streak and a desire to be called by her own given name, Lady Bird. The narrative, small scale in the grand scheme of things but large scale in the life of the protagonist, follows Lady Bird through all of the usual trials and tribulations of one’s teenage years. From first forays in to dating and sexuality, to the complicated dynamics of school friendships to the arduous and stressful task of applying to college, the film covers it all with PTSD inducing authenticity. Even prom gets its rightful few minutes. Without a shadow of a doubt, though, the star theme of the picture is the almost impossible nature of the mother/teenage daughter relationship.

Amidst the fast paced changes happening in all other areas of her life, Lady Bird’s relationship with her mother Marion (Laurie Metcalfe) remains a grounding yet frustrating constant. I can honestly say that I have never seen a film that so exquisitely demonstrates the kind of second by second love/hate relationship that is so exclusive to a mother and her daughter. The film delights in presenting full scale rows between the two characters, followed almost instantly by exchanges of tenderness or banter that can only occur in a dynamic where, as the dialogue so beautifully alludes to, you can unconditionally love a person without having to necessarily like them.

The film is sweet about its variety of young characters whilst also poking a cynical and knowing finger at the natural self importance of teenagers in their ascendency to adulthood. There is a satisfying blend of humour created by the them and humour at their expense, and it makes Lady Bird a really endearing and enjoyable watch for all age groups. This isn’t just a ‘teen flick’ that concerns itself with tired tropes like a live or die star crossed romance or a journey to win the talent contest, it is a love letter to the hazy days of high school that also addresses concerns, feelings and consequences on the other side of the road, as it were. Marion and other adult characters are just as crucial to the overall narrative as Lady Bird and her assorted peers, and though having both perspectives constantly butting heads doesn’t always make for the most comfortable or fanciful viewing, it certainly feels about as real and honest as can be. Lady Bird is funny, smart, sweet, biting when it needs to be, poignant and original, and for a genre as overcrowded as the teenage coming of age story, that is high praise indeed. 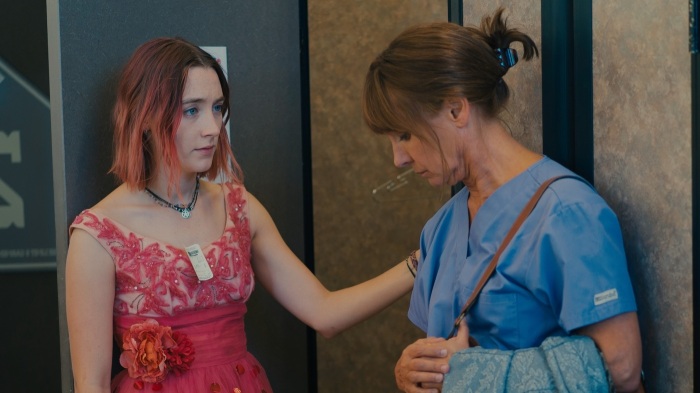 As Lady Bird, Saoirse Ronan continues to build her case for being regarded as one of the film industry’s most talented performers. At the tender age of 23 and with three Oscar nominations already under her belt, the Irish actress is excellent as the film’s titular character. It takes a certain something to be able to play a character who is intentionally unlikable for large periods of a narrative, yet still have the audience rooting for you, and in Lady Bird Ronan embodies all of the cocksureness, false maturity and smugness that an adolescent female possesses, underpinned with the gripping dose of vulnerability that defines every decision in her young life. It is a far superior and much more layered performance than arguably any other example in the genre.

As Marion, Laurie Metcalfe gives a performance that I’m sure many mothers in the same situation will find utterly relatable and maybe even a little too close to the bone at times. Her love for Lady Bird is obvious, but like so many parental figures, she cannot help but impose her own personality and wishes upon her daughter as well. Together, the two actresses share a viscerally authentic chemistry, a never-ending argument, encased in love, that is played out so honestly that the audience flip-flop with their side taking from start to finish.

Fleshing out the stellar cast list are the likes of Tracy Letts, Lucas Hedges, Timothee Chalamet, Beanie Feldstein and Lois Smith, all of whom perform their roles with the same authenticity and sincerity that encapsulates the picture as a whole. The film is very much the story of Lady Bird and Marion, but without the supporting players to enrich the cinematic universe, the stakes would neither feel as real or as rich.

Overall, Lady Bird is an absolute joy from start to finish. It’s no secret that Greta Gerwig is one of cinema’s leading emerging forces, and her special brand of sweet and sincere yet searing can be seen, heard and felt all over her directorial debut. I don’t feel it’s controversial to say that women might feel more attached to the story, but that is not to say that the film isn’t full of universally recognisable and relatable themes. It’s an out and out coming of age tale, easily one of the best examples of the genre. And I’m not talking in the last ten years, I’m talking ever.