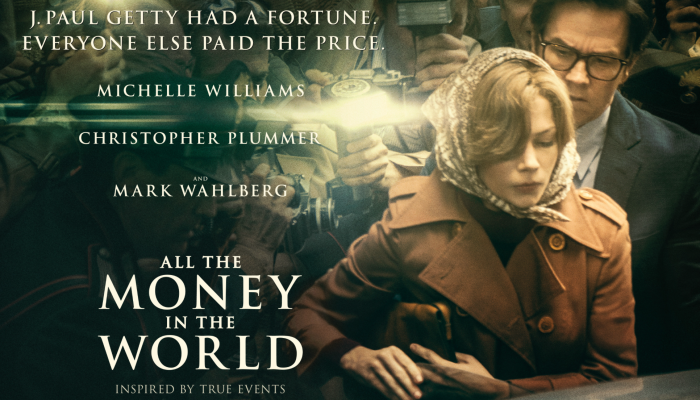 Ridley Scott’s latest directorial effort has been one of world’s most talked about pictures over the course of the last few months, but not for the reasons that he might have hoped. After the recent allegations and revelations of sexual misconduct concerning Kevin Spacey came to light, All The Money In The World went from being an Oscar push vehicle for the now disgraced actor to a wild scramble by the intrepid director to remove any trace of him from the film. And who else to step in and save the day than good old Captain von Trapp himself, Christopher Plummer?  I’ll be honest, I went in more interested by the filmmaking backstory then the narrative premise on this one. Could Ridley really get away with such a drastic last minute switch?

All The Money In The World recounts the true life event of the 1973 kidnapping of 16-year-old John Paul Getty III (Charlie Plummer) by a branch of the Italian Mafia. The narrative follows the struggles of his mother Gail Harris (Michelle Williams) and former CIA operative Fletcher Chase (Mark Wahlberg) to locate him, as well as the imperious, overarching shadow of his grandfather, the infamous oil billionaire J. Paul Getty (Christopher Plummer), who halted progress by refusing to engage in extortion and pay the demanded $17 million dollar ransom.

The first thing I’ll say is that Ridley Scott and his team have done a wonderful job of seamlessly editing in one central star for another. Any fears that the film might feel messy or thrown together are completely unfounded, it is as well put together as any of his other recent offerings. With that particular question answered, however, the truth of the matter is that All The Money In The World is rather more plodding and mundane than its wildly interesting subject matter deserves. It goes through all of the motions of a typical kidnap/ransom type tale, but the problem is that the saga of the Getty family and their unimaginably rich, inexplicably miserly patriarch isn’t typical at all. Indeed, the moments in which the audience are exposed to the depths of Getty’s parsimonious nature are some of the most affecting in the film. Installing a red telephone box in his mansion for guests to use with their own change, paying millions of dollars for a work of art whilst his grandson is missing because he sees it as a better investment, all moments that shock and inspire feeling in the audience, sadly more feeling than one gets watching the fairly paint by numbers sequences set in remote kidnap locations across Italy. It is no secret that young Paul Getty’s ear was famously cut off and sent to a newspaper during his time held captive, and it almost feels like the film is simply waiting for this big set piece moment in hope that it will make up for some of the more forgettable moments in-between. It might for for some, but it didn’t for me.

The picture ties things up a little more neatly than in reality, with the closing captions mentioning nothing of the dark, depression filled future that would ultimately see Paul a quadriplegic through drug overdose by 1981. Fair enough, that part of the history isn’t what the film is about, but a total failure to reference it in closing feels somewhat deceptive. All The Money In The World is by no means a bad film, it’s a better than average kidnap thriller if anything, but I can’t help being left with the feeling that it could have been so much better.

Unequivocally, the shining star of the show is Michelle Williams. She had a brief recent departure from her usual dramatic fare in The Greatest Showman, but as Gail Harris she is back to her bread and butter as a mother desperately trying to arrange safety for her son. Williams is stoic yet vulnerable, and many of the two handers that she enjoys opposite Christopher Plummer are absolutely delicious to watch.

As for Plummer himself, the veteran actor must be commended for stepping in at the eleventh hour and performing like the role was his all along. There is a slight twinkly eyed quality to Plummer that is vital to giving Getty a little more depth and character than simply that of an aged miser. I don’t like to think of Kevin Spacey much these days, but I can’t imagine his prosthetic heavy take on J. Paul Getty would have been more impressive than Plummer’s.

As Paul Getty, Charlie Plummer is positively angelic. Looking like a mixture between a quintessential 70s teen idol and a member of 90s band Hanson, Plummer gives a really endearing performance that mostly requires adapting to different levels of threat and danger for two hours. He clearly does it well, as the audience are rooting for him from the get go, and the much anticipated ‘ear scene’ is just as upsetting as you would expect it to be.

Mark Wahlberg gives a fairly uneventful performance as former CIA operative Chase Fletcher, definitely the most cardboard cut-out of the central characters. His machismo and his assured presence work well for the role, but in terms of interest, Fletcher is low down on the pecking order amidst the much more impactful and intriguing Getty clan.

Overall, All The Money In The World has just enough thrills and spills to make it a satisfying viewing experience, but without the genuinely stellar turn of Michelle Williams and the safe pair of hands that is Christopher Plummer, the film wouldn’t be half as memorable. It is much more interesting as a character study of different Getty family individuals than it is a fast paced thriller, and ultimately you can feel the struggle between the two styles. Some fantastic performances and some great cinematography are certainly enough to recommend it, but don’t expect to be completely blown away.