Happy New Year, and welcome to Oh! That Film Blog in 2018! Same old reviews, brand new movies, the first of which is one that I had been looking forward to for some time. To my discredit, the writer of a film isn’t usually a feature that I take in to large account when making cinematic viewing choices, but when the screenwriter’s name is Aaron Sorkin, the situation is very different! From The West Wing to The Newsroom to The Social Network to Moneyball, Sorkin has produced some of the finest dialogue the world has witnessed over the last twenty years, and when you hear that he is making his directorial debut alongside one of your favourite actresses, with a script he too has written, well, you feel HYPE.

Molly’s Game tells the true story of Molly Bloom (Jessica Chastain), a former Olympic free-skiing hopeful who finds her fortune running back room poker games for the rich and famous in Los Angeles and New York. Starting from nothing and subsequently finding herself indicted by the government for involvement with the Russian mafia and her millions stripped away, Molly seeks legal council from esteemed lawyer Charlie Jaffey (Idris Elba), and the narrative operates as a series of story telling flashbacks followed by the present day circumstances of the court case dealings.

The first thing to say about Molly’s Game is that it is unmistakably Sorkin. The dialogue is sharp, snappy, perfectly placed and runs at 100 mph. Any fans of his previous work will feel right at home in this stylish, smart environment filled with clever people and even cleverer banter. Half of the joy of a Sorkin project is in sitting back and letting the use of language run over you, and you certainly get that in this picture. Alongside the stellar dialogue, the central story of a female making it big in a largely male dominated environment is one that feels extremely prescient, with the added refreshing factor that Molly’s romantic life is something that is barely mentioned, let alone used as a defining aspect of her character.

You don’t necessarily have to know much about the game of poker to enjoy the film. Knowledge of the intricacies will obviously enhance the experience, but the picture does a great job of including every audience member in the stakes of proceedings with subtle, light handed explanations when needed, explanations that don’t feel overly expositional at all but rather fit with the fast paced tone of the plot.

Though the experience of watching Molly’s Game is an overwhelmingly positive one, there is no getting away from the fact that it is way too long. At two hours and twenty minutes, the breakneck writing of Aaron Sorkin, whilst delicious, can start to become exhausting. His master domain has been operating to a tight 42 minutes of television, add another 120 to that and a slight air of overindulgence starts to emerge. This being a directorial debut, I am willing to forgive him, and I only hope that with time and experience, he will learn to trim some of the fat so that the audience is left with the lean, prime fillet cut that his dialogue deserves. Just to reiterate, though, outside of its excessive runtime, Molly’s Game is a great, great movie. It is sharply witty, stylishly interesting, flat out cool and also celebrates the integrity, intelligence and influential nature of an impressive but somewhat flawed woman. Don’t be put off if poker and gambling isn’t your theme of choice, there is much more here than meets the eye from mobster subplots, to sporting drama to classically strained father/daughter relationships, all with a razor sharp level of humour present throughout. 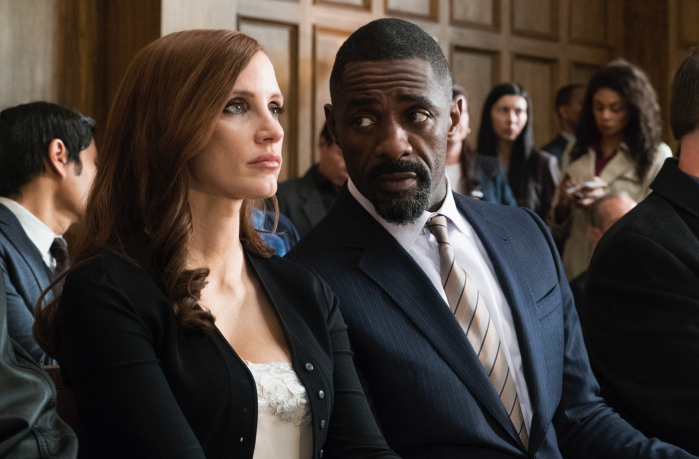 If you, for some reason, are not aware, Jessica Chastain is an absolute powerhouse. One of the greatest performers working in Hollywood today, and certainly a contender alongside Amy Adams for the best actress never to have won an Academy Award. As Molly Bloom, Chastain oozes class and style and brains and tenacity, whilst also maintaining an all important grounded quality that makes the character an endearing one for the purposes of audience attachment. Though Sorkin’s writing is the star of the show, there’s no doubting that Chastain is vital from a visual standpoint. Her on screen presence is effortlessly strong, and you believe that the character could, even in her most vulnerable moments, could rise in the fashion that she did in an environment so pitted against her sex and sensibilities. Molly’s Game, Miss Sloane, The Zookeeper’s Wife, even her very first feature film Jolene. I’m starting to lose count of pictures that this amazing actress has carried almost single handedly.

Idris Elba as lawyer Charlie Jaffey is solid if not slightly two dimensional, one of the better and more enjoyable examples of a scene partner for Chastain to showcase Sorkin’s breakneck banter. He performs a third act monologue that is particularly arresting and perfectly sums up the attitude and message of the film. Together the two share an enigmatic chemistry, but refreshingly one that didn’t have to lead to the bedroom.

Some fun supporting performances are given by the likes of Chris O’Dowd, Michael Cera, Brian d’Arcy James and Bill Camp as the cast of card sharks who attend Molly’s games. Each are given their own moment to shine and do a great job of adding texture and richness to the foreign, frenetic world of back room poker. As Molly’s overbearing, overpowering father Larry, Kevin Costner gives a brilliantly bristly performance, doing as much for Molly’s character development and back story in his short scenes as any of the longer monologues by the protagonist. A classic product of Sorkin’s excellent writing.

Overall, Molly’s Game is a film bursting with fantastic dialogue and fantastic performances, it’s just a shame that first time director Aaron Sorkin couldn’t keep the picture quite as tight as the lines spoken within it. Its two and half hour running time might prevent it from being one that you go back to again and again, but that initial viewing will absolutely be one that provides with all of the cinematic entertainment that you are looking for.