Merry Christmas everybody, and welcome to the week between the 25th and New Year’s Eve when nobody knows who they are, what day it is or what they are supposed to be doing. Whilst I am still struggling to figure out what the time is and what my own name is, I’m not quite delirious enough to forget to go to the cinema, and the film the keeping me busy in this lost final week of the year is The Greatest Showman.

The film, an original musical, tells the rags to riches story of P.T. Barnum (Hugh Jackman), the founder of the famous Barnum & Bailey Circus. The narrative follows Barnum as he recruits a host of ‘curious’, ‘aesthetically unusual’ performers to build a new brand of show business extravaganza, while also detailing his ambitions to break in to mainstream acceptability as the agent of a prodigious Swedish singer (played by Rebecca Ferguson). Barnum’s divided loyalties strike discord in both his professional life and his personal life with his wife Charity (Michelle Williams), and the film works almost like a fable for remembering and cherishing the real blessings in life and not getting carried away with unnecessary and detrimental ambition.

Here’s the thing. I absolutely, truly appreciate studios taking chances on original musicals in this day and age, I just wish The Greatest Showman were better. For a film that revels in celebrating the more unusual sides of life, the problem is that it is a little too straight laced and traditional for its own good. Don’t get me wrong, I’m not looking for American Horror Story: Freak Show, but the extreme neatness and sanitised feel that the film possesses goes against its focus on the beauty of human nature’s grandest curiosities. I went in hoping for a vibe akin to something like Moulin Rouge!, and whilst the picture certainly boasts a similarly enigmatic aesthetic at times, there is a sense that it is too sugar coated for its own good, and it definitely doesn’t leave as long lasting an impression as the Baz Luhrmann masterpiece. Perhaps the fundamental difference between a PG and a 12A.

Much hype has been made about the fact that the musical numbers are written by the La La Land team, but I’m sad to say that the only genuinely arresting song in the film is the anthemic ‘This Is Me’. The filmmakers clearly know this to be the case, as the uplifting track is the only one prominently featured in any trailer. Other songs make for poignant and enjoyable viewing when witnessed in their visual set piece contexts, but on initial viewing there just didn’t seem to be enough real showstoppers in the the mix. Ultimately, The Greatest Showman, despite its quirky cast of characters and grandiose potential, falls somewhat flat and fails to make the kind of impact that it both promised and intended. 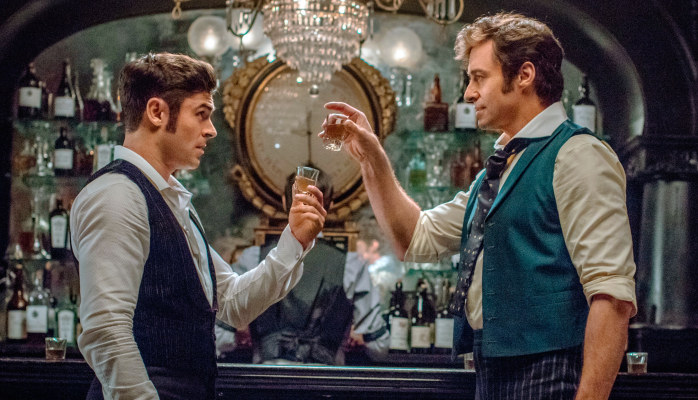 By now, we all know that Hugh Jackman is a good old fashioned song and dance man at heart, and he showcases some of his best razzle dazzle qualities as P.T. Barnum. Solid screen presence and a solid set of pipes see Jackman lead the picture with ease, but I can’t say that he is ever truly magnificent in the role, instead operating a sustained ‘good’.

Michelle Williams is given a rare opportunity to smile in a picture as Barnum’s wife Charity, even if someone of her stature does feel a little wasted in the role. Some of the more prominent supporting performances are given by Zac Efron as Phillip Carlyle, Barnum’s partner and Rebecca Ferguson as Swedish songstress Jenny Lind, both of whom provide an extra boost of star quality. Ferguson’s singing voice, however, is dubbed in the film by Loren Allred, which leaves one to wonder why a more versatile performer wasn’t cast in the first place.

Perhaps the most pleasant surprise of the film comes in the form of Zendaya as trapeze artist Anne Wheeler. I must admit that her name was one that I only knew through Twitter gossip and the world of celebrity circus, but the former Disney Star really shines on the screen and displays some impressive acting chops in her limited opportunities.

Overall, The Greatest Showman is a pleasant enough cinematic experience without being something that is going to become a long lasting favourite. In a set of extremely individual circumstances, I ended up seeing the picture the day after seeing Hamilton in London. A word of advice, perhaps don’t go and see a middling movie musical less than 24 hours after witnessing possibly the greatest piece of musical theatre ever committed to the stage, quite literally anything will pale in comparison. The Greatest Showman provides perhaps a richer ‘family fun’ experience than many other offerings at this time of year, but don’t expect to be completely blown away.