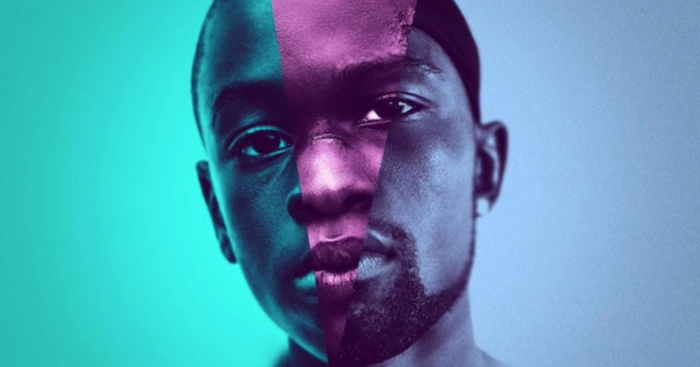 With less than a week to go to the big day, I can now officially say that I have seen all of the films nominated for Best Picture. The final nominee to hit British screens this week is Moonlight, the main contender, according to critics anyway, to steal the prize from the picture that many believe already has its name etched on the statuette, La La Land. Regular readers of this blog will recall just how strongly I felt about La La Land, so the prospect of watching something that is receiving just as much, if not more, praise was an exciting one indeed.

Set in Miami, Moonlight tells the coming of age story across three distinct life stages of Chiron (played by Alex Hibbert, Ashton Sanders and Trevante Rhodes respectively), a black male growing up in a tough neighbourhood with the added pressures of a crack addicted mother (Naomie Harris) and a growing awareness of his own homosexuality. Chiron suffers both physically and psychologically at the hands of both his mother and his peers, with only the mentorship of a local drug dealer (Mahershala Ali) and a playful, secretive relationship with a fellow classmate to comfort him.

Divided in to three distinct chapters featuring three differently aged actors as Chiron, it has to be said that all three segments, portraying childhood, adolescence and adulthood, are pretty much perfect slices of iconic coming of age cinema. The audience witnesses Chiron evolving from a small, sensitive, almost mute boy, to a weedy, conflicted teen to a surprisingly different kind of adult, and it’s up to the individual opinion of the viewer whether the trajectory of this life journey is a positive, though certainly problematic, one. The film is heartbreaking on many different levels, but proves to be a wonderfully cathartic experience rather than a depressing one. Amidst the heavy themes of drug addiction, sexuality and violence, there remains a sprinkling of magic dust, thanks in part to some mesmerising cinematography, that helps to maintain a much less aggressive and bleak tone than comparable pictures like Pariah or Precious.

It is tempting to make comparisons between this film and another recent high profile coming of age story, Boyhood, and whilst the extended filmmaking efforts of Richard Linklater’s epic project are certainly more ambitious, the truth is that the story told in Moonlight is much more arresting and powerful, with each chapter examining exactly how traumas, no matter how big or small, can stay with someone and affect the person that they become in the next stage of their life. Covering two topics that are rarely combined in mainstream film, that of the African-American experience and that of the gay experience, the picture not only feels like a stunningly executed piece of cinema, but it also feels like an important bookmark in social commentary. Hopefully it will not only be enjoyed in years to come by film buffs, but also by students who can learn a lot about the multitude of themes.

Not many films require the services of three actors to play a protagonist for equal amounts of time and importance, and for Alex Hibbert, Ashton Sanders and Trevante Rhodes to capture the same essence of a character and make his evolution a believable, authentic one is nothing short of spectacular. From a young Hibbert asking what exactly is “a faggot” to a teenage Sanders finally snapping to an adult Rhodes giving an insight in to the life he has lived and the life that he so painfully has not, each actor makes their mark in the role of Chiron, and the plaudits should be shared among them.

As drug dealer Juan, Masherhala Ali is the favourite to win Best Supporting Actor on Sunday, and though his screen time is limited, the actor’s performance is excellent. Though his interactions with Chiron are relatively brief, the connection that they spark and the intimacy that they share has a huge impact, determining the protagonist’s future in many different ways. Ali possesses that strong, centred type of on screen presence that immediately pegs him as somebody important, and this was a key trait to have for a character who comes out of nowhere to take a small boy under his wing.

Naomie Harris puts in a strong performance as Paula, Chiron’s drug addicted mother, a tragic figure who, thanks to her vice and Juan’s profession, makes for a confusing and contradictory ‘family unit’ on Chiron’s part. Further supporting roles are given by a brilliant cast including Janelle Monáe (who with this and Hidden Figures is experiencing home run after home run at the beginning of her film career), André Holland, Jharrel Jerome and Patrick Decile.

Overall, Moonlight is a heartbreaking, sensitive, strangely captivating coming of age drama that soars immediately in to the top echelon of its genre. I have seen a handful of narrow minded criticisms proclaiming that if you have no experience of the African-American struggle, or of struggling with your own sexuality, then you won’t be able to relate to the film, but I wholly disagree. One of the biggest achievements of the picture is that it manages to be so universal despite its very niche set of narrative circumstances. At the heart of the film is human pain and human growth, and if those aren’t two of the most relatable subjects in the world then I don’t know what are.