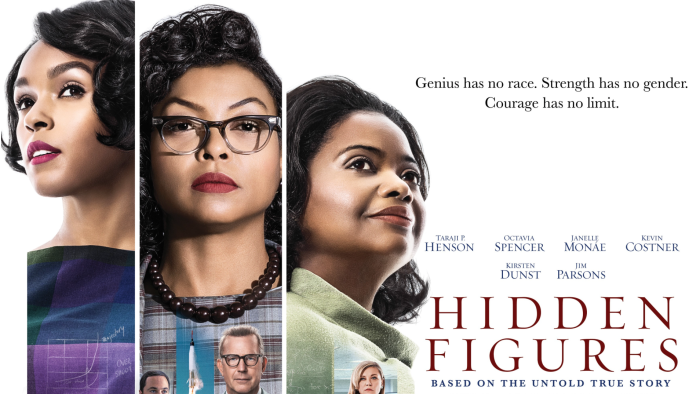 There are many different kinds of films that I have special affection for, musicals being one, Disney animations being another and modern Westerns also being held in high esteem. Another genre of movie that seems to get me every single time is that of the ‘secret history’ story, those movies that shine a light on a historical period or event that has enjoyed very little exposure but is inspiring and captivating nonetheless. One such example of the secret history narrative has arrived in the form of Hidden Figures, a film that has been richly regarded this awards season and sits proudly among the Best Picture Academy Award nominees.

Hidden Figures tells the relatively unknown stories of Katherine G. Johnson (Taraji P. Henson), Dorothy Vaughan (Octavia Spencer) and Mary Jackson (Janelle Monáe), three black women in 1960s Virginia who held important and valuable positions within the NASA organisation, computing numbers and making engineering contributions that lead to the USA’s groundbreaking achievements in the space race. Interweaving tales of human excellence amidst the tense and bewildering background of race relations in 1960s America, the film’s messages of triumphing over adversity, social progress and a particular focus on the strength of women (minority women in particular) feels eerily timely. In the same important way that La La Land provided audiences with some much needed escapism, Hidden Figures provides some much needed inspiration and empowerment in a current period where not many people are feeling hopeful.

As a piece of constructed cinema, the film hits all the familiar kinds of story beats that one is used to experiencing in a biopic drama, but it does so in such an assured and well executed way that rather than feeling overly ‘safe’, the film simply succeeds in telling a brilliant story of both scientific and black history that makes for enriching and engrossing viewing. The contrasts between the lives and privileges of the black NASA employees compared to the white are made alarmingly clear, but there is a great sense of satisfaction when we see that ultimately what brings these particular characters together are their beautiful minds. For some reason, the word that keeps popping in to my head is comfortable, which is interesting because though much of the racial and gender based content is far from ‘comfortable viewing’, the overall feeling that you get whilst watching Hidden Figures is indeed one of comfort, comfort in the sense that you know you are experiencing the craft of talented individuals both in front and behind the camera. You understand very early on in the picture that what you are watching is quality, and this puts you at ease to enjoy the way that events unfold. Though the film doesn’t quite reach the heights of a true classic, the inspirational swell of emotion that its story portrays is something that makes for truly entertaining and valuable cinema, carrying education and messages that can be enjoyed by all generations and demographics, verified by the completely varied audience that enjoyed the film in my screening on a cold Friday afternoon.

It would be fair to suggest that a large factor in the lasting appeal of Hidden Figures is going to be the stellar performances by its leading cast members. As protagonist Katherine G. Johnson, Taraji P. Henson gives one the best performances of her career. A far cry from the abrasive, uninhibited Cookie Lyon in Empire, as Johnson the actress embodies a character who is full of pride, dedication and an unextinguishable spirit that drives her to success in a field where all of the odds are stacked against her. There is a strong yet delicate physicality to Henson’s performance, with little, seemingly innocuous touches like a nervous push of the glasses adding so much to the depth her character. As Mary Jackson, Janelle Monáe brings a level of sass and attitude that offsets the rather tense and busy action that surrounds the plot. Arguably the most glamorous of the women but equally as genius, Monáe is utterly believable in her portrayal of a head strong, unapologetic woman who fights for her right for further education to become the engineer she deserves to be.

As Dorothy Vaughan, Octavia Spencer brings a more mature, measured tone to proceedings, a wise woman with a razor sharp intellect and talent for hands on science. Spencer’s character follows a somewhat different path to that of Katherine and Mary, but we see come to see that her role at NASA is just as indespensible as the others. Spencer’s supporting role received the sole acting Oscar nomination for Hidden Figures, and whilst I celebrate her recognition, I also commiserate with Taraji P. Henson who, in my opinion, could easily have replaced Meryl Streep in the Best Actress category. Further strong supporting roles are given by a big name cast including Kevin Costner, Jim Parsons and Kirsten Dunst. The point of Costner’s character, fictional director of Space Task Group Al Harrison, could certainly be questioned, as there is a distinct whiff of the ‘white saviour’ trope on more than one occasion, but hey, if that’s how it went down with an amalgamation of real life figures, then that’s how it went down.

Overall, Hidden Figures is a strong, moving, inspirational biopic that gives audiences the chance to learn a story that feels momentous both for African American history and for the history of scientific and technological advancement. Three stellar, endearing performances provide the human, beating heart of what is essentially a film about algebra, and to keep somebody like me who can barely get to grips with their times tables completely engrossed is a mean feat. With the release and recognition of recent films like Fences, Moonlight, Loving and The Birth Of A Nation, it could certainly be argued that the #OscarsSoWhite campaign has had a swift impact on the film industry. If this is the case, then long may it continue, because as far as I’m concerned, the more diversity in films, whether it be in their cast, crew or subject matter, the better.