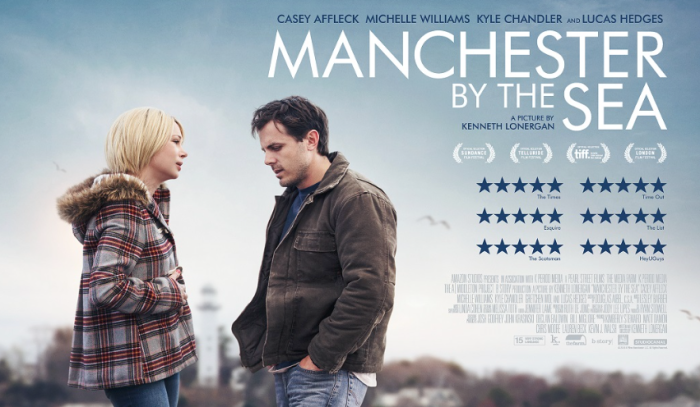 I’ll be honest, I’m still on a bit of a high from La La Land. What could possibly bring me down from the pure cinematic, whimsical joy that Emma Stone and Ryan Gosling filled my heart with? A family melodrama focused around a number of unspeakable tragedies, you say? Oh, okay, that ought to do it.

Manchester By The Sea tells that story of Lee Chandler (Casey Affleck), a troubled man who is forced to travel back to his hometown in Massachusetts to take guardianship of his teenage nephew Patrick (Lucas Hedges) after the death of his older brother Joe (Kyle Chandler). Faced with the prospect of grieving for his brother and starting a new temporary life in the same town where a horrific accident ruined his life and triggered divorce from his wife Randi (Michelle Williams), the film presents itself as half exploration of death and half downbeat buddy movie, as Lee and Patrick form an unusual and unlikely partnership to help one another through an unimaginably difficult time. Manchester By The Sea came to the big screen on the back of an unbelievable amount of hype, with many critics talking as though Casey Affleck already has the Best Actor Oscar in the bag, and whilst the film is certainly impressive, emotional and brittle in some of the best dramatic ways, it is, dare I say it, somewhat overrated?

In achieving such a state of realistic grief and a somewhat offbeat representation of the way that families have no choice to move on from tragedies, the film, at times, seems to forget that audiences enjoy at least a few cinematic devices to help them invest in characters and actions. Both Lee and Patrick go from one encounter to another, both together and individually, but very rarely do they experience any development or positive trajectory. There is absolutely no doubt that the details of the plot are some of the saddest and most upsetting I have seen in a drama for some time, and whilst my empathy was certainly high from an objective point of view, I found that I wasn’t truly investing in the journey like I did in La La Land (sorry to keep bringing it up, but it feels apt seeing as both films are racing for Best Picture). I guess one could describe my viewing experience as rather ‘distant’, typified by an ending that isn’t at all satisfying. Of course, endings to periods of extreme sadness and grieving rarely are satisfying in real life, but in terms of a cinematic journey, I may be ‘basic’, but I felt I needed a little more closure. Perhaps I’m a col hearted alien, perhaps I’m an unfeeling psychopath, but whilst acknowledging that Manchester By The Sea is a technically impressive work with some great cinematography and a heavy score, I can’t help but feel that its final execution doesn’t deserve or achieve the soul crushing sadness that its core themes clearly evoke.

As protagonist Lee, Casey Affleck does indeed give a great performance, if not a little one note throughout. As far as internal pain, suppressed feelings and emotional detachment go, Affleck provides a masterclass from the slight tilting of his head to the thousand mile stare in to the distance. As a whole the film is a slow burn drama, and Affleck gives a slow burn performance to match the pace. There is no doubt that the control and fragility of his portrayal is incredibly impressive, and even though the film has not been my favourite of the season, I can absolutely see why the actor has been taking up all of the column inches. Lucas Hedges as teenager Patrick gives a very interesting performance, displaying a different type of reaction one normally sees to a parent dying in cinema. There are less tears than one expects and much more trying to take advantage of his uncle to seek out sexual opportunities with either of his two girlfriends, and this aspect of the narrative is actually the most enjoyable for me, relying less on a manipulative emotional angle and more on the realities of being a teenage boy, regardless of your current family situation. Michelle Williams is criminally underused as ex-wife Randi, of all the sadness on display, her character’s emotions were the ones that I connected with the most. In fact, Affleck seems to be at his best when playing alongside her, and that reason it is a great shame that there time together is so limited as it would have made a great performance even greater.

Overall, I don’t think I have felt this way since Birdman in the sense that a film for which I have heard almost unanimous praise has failed to really do it for me. Don’t get me wrong, it’s a completely solid drama that zigs where other stories in the same genre might zag, but ultimately I feel that Manchester By The Sea may have fallen victim, for me, at least, to its own incredible hype. I’m certainly glad I saw it, but it’s not one that I’m going to be revisiting again and again, not, like other dramas, because of the heavy, draining storyline, but rather for the fact that it simply failed to grab me as it clearly has others.