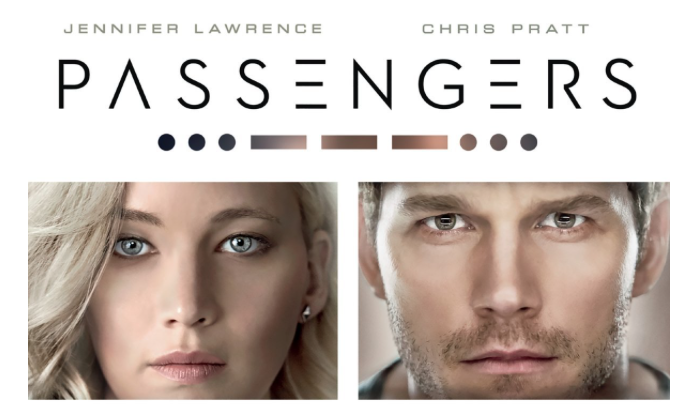 With the critical success of Arrival still ringing in most cinema lover’s ears, it almost feels like not enough time has passed until we are all here again, donning our sci-fi hats for another big release. Up to this point, Passengers has spent many years on the blacklist, a list of scripts that show huge promise but for one reason or another have been left unproduced. Was this the right time? Did the story now have the right cast and creative team to be another blacklist success?

My answer, at least, is no, absolutely not. Contrary to what the trailers might want you to think, Passengers tells the story of Jim Preston (Chris Pratt), an engineer in hyper sleep along with 5000 other guests who are making a 120 year journey to Homestead II, a colony away from Earth, to start a new life. After a heavy collision with an asteroid, Jim’s sleeping pod malfunctions and he awakes, not with the intended four months to go, but with 90 years of the trip left. After a year of loneliness, Jim commits the selfish, gross, reprehensible act of awakening Aurora Lane (Jennifer Lawrence), a fellow sleeping passenger to whom he takes an instant liking. The narrative then proceeds as a predictable ‘falling in love’ story, all the while with this huge secret hanging in the air, and despite its absolute creepiness, the movie could have saved itself by completely switching tone and direction once the secret was finally revealed (nowhere near the conclusion, therefore not a spoiler in my eyes). However, rather than portraying Jim’s act of, essentially, murder for exactly what it is, the film instead chooses to spew lines of painfully cliched dialogue like “I can’t live without you” and “you die, I die!” in order to try and get the audience invested in the biggest case of Stockholm syndrome in space you ever likely to see. The problematic nature of this central conceit is not helped at all by the fact that, despite the fun ship design and interesting machinations of Jim’s everyday life before his terrible crime, the film guides us to a completely underwhelming conclusion. Amongst the drama of the passenger’s relationship is the ever-present problem of the ship losing its function, and the search for a reason is greeted with such a lacklustre and, in truth, boring reveal that it leaves you feeling a fool for caring in the first place.

Several critics, critics that I respect, have been less harsh on the movie, saying that if you disregard the the problematic nature of the central conceit then it is actually a rather enjoyable sci-fi adventure. To me, that is like saying that if you disregard the nature of the shark, then Jaws is actually a rather enjoyable beach adventure. It doesn’t work like that. If Jim and Aurora (Sleeping Beauty, get it?) had both been accidentally woken by the asteroid shower and entered in to their narrative union on level terms, then yes, by all means, let me enjoy the nifty ship tech and space walking set pieces. The fact that they didn’t, however, and the fact that the film goes to extreme lengths to show us that Jim’s plan ultimately worked in exactly the way that he wanted it to, leaves me no other choice but to brand it utterly, utterly gross. One positive. Passengers is a big budget movie that isn’t based on or attached to any previous property, and any time that happens nowadays is a cause for celebration. Unfortunately, this is pretty much where my praise for the film ends. 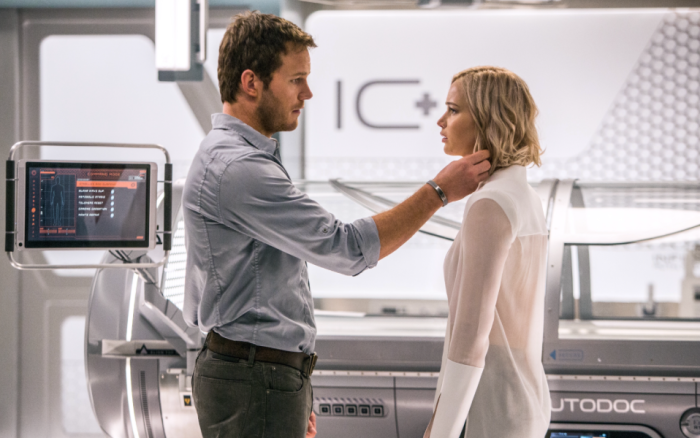 Though he has more than proved his comedic worth with his stellar work in Parks And Recreation and has shown that he can be a solid action dude for a new generation in Jurassic World, in Passengers Chris Pratt failed to show me that he can cut it when the dramatic stakes are high. For a man who has become so lonely that he considers throwing himself out of the ship in to the vastness of space, the depth of Pratt’s performance never really scratches past surface level. He wasn’t terrible by any means, and my opinion of him may be marred by the, in my opinion, unforgivable actions of his character, but ultimately he just didn’t do enough to carry the weight and layers of the character that the script might have intended. Jennifer Lawrence has always been at her best when she has operated with an air of mania (see Silver Linings Playbook, American Hustle), and without a doubt her best moments in the film are those in which she gets to display her rage at discovering the true reason for her fate. Unfortunately, this passage of the narrative is all too short, and for the most part Lawrence plods along in her romance with Pratt and her efforts to ‘save the ship’ without being particularly remarkable. She is clearly a better actor than her co-star, stealing the majority of scenes that they share, but ultimately the terrible, predictable, lacklustre dialogue prevents either performer from being able to do anything special.

Overall, Passengers was a bitter end to my cinema going year. My friend brought up an interesting point about there being a need for more sci-fi, space oriented films that don’t necessarily feature epic battles between factions or species, but whilst fitting that niche, this problematic rubbish is certainly not what either of us were looking for. If like some, you can overlook the central conceit, then best of luck to you, but I definitely couldn’t. All I could think during the final two thirds of the movie was how bloody brilliant it would have been if Aurora had woken up and been a lesbian. Better luck next time, Jim, you absolute creep!