Set across some of the more iconic locations of the Second World War from sultry Casablanca to blitzed London, Allied tells the story of Max Vatan (Brad Pitt), a Canadian intelligence officer who is assigned to an undercover mission in French Morocco to assassinate the German ambassador. Partnered in his quest by a beautiful French Resistance fighter named Marianne Beausejour (Marion Cotillard), the two, in ideal cinematic fashion, fall swiftly and deeply in love, and upon completing the mission, Marianne accepts Max’s proposal of marriage and the two travel back to London to start a life together. That is, until a year later, when Max learns from Special Operations that they believe his wife is a German spy, and the bulk of the narrative plays out as a game of cat and mouse with Max seeking the truth and being ordered, should Marianne be proven guilty, to execute her with his own hand. The premise sounds kind of exciting, right? The trailer for the film somewhat buoyed my enthusiasm too, but in a classic case of style over substance, the only truly memorable thing about Allied is the fact that everyone and everything looks great rather than is great. From the sultry dusk of Casablanca to the jarring pyrotechnic beauty of the blitzed London sky, the cinematography of the picture, though impressive, does not quite manage to disguise the fact that it is ultimately slow and plodding and doesn’t provide a satisfying enough conclusion to the early tension that it builds.

For such a seemingly life changing situation, the drama is played out in a very muted, Arthur Miller-esque way, and though there is something to be enjoyed in the way that the plot slowly begins to unravel, there is never that spark of ignition that takes the story from one gear to another. To be clear, I’m not asking for Pitt and Cotillard to replicate the outlandish antics of warring spy lovers akin to Mr. And Mrs. Smith, but the way in which the narrative progresses at such an ‘even keel’ results in leaving the audience relatively uninvested by the time the final third comes around, and unfortunately it is a final third that the filmmakers really need the viewer to be 100% engrossed in otherwise the conclusion falls entirely flat. The problem with Allied isn’t that it is a ‘bad’ film, because I can’t say that it is bad, the problem is that it isn’t particular good either. For a picture with such an enticing premise, it stays so excruciatingly on the fence with regard to execution and narrative choices that I, at least, was left entirely unmoved when I knew that that was the exact opposite reaction that was desired. 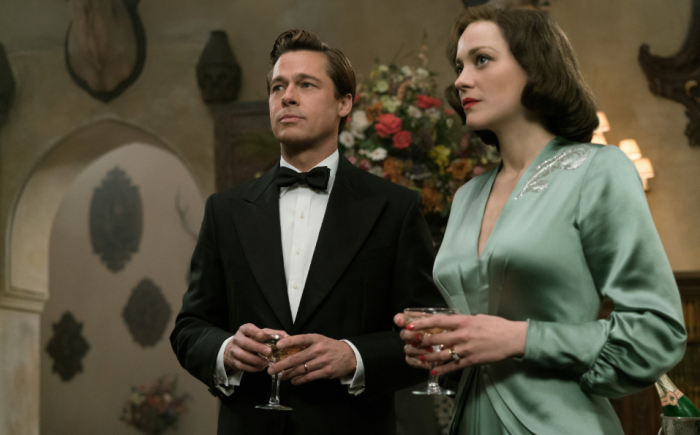 As on screen couples go, you can’t get much more attractive than Brad Pitt and Marion Cotillard. As he continues to morph in to Robert Redford with age, Brad Pitt strikes a fine figure as Max Vatan, every inch the brave war hero as his opening shot of parachuting in to the Moroccan desert might suggest. Though he certainly looks the part, I will say that this is far from Pitt’s finest acting performance. Whether it’s because portions of his dialogue are rather stilted or because he has to contend with Cotillard’s much more compelling display, but there is just enough of a hint of ‘phoning it in’ from Pitt that never really allows you to fully connect with the character. As the enigmatic and beautiful Marianne Beausejour, Marion Cotillard is a master of those exact qualities. Seemingly born to inhabit the period world of golden age sirens, her elusive performance allows us to believe effortlessly that a man in love might not see what is right in front of his face, and again, though Cotillard has stretched her acting legs much farther in better films, she does nothing to harm one’s enjoyment of the picture, in fact arguably being the most enjoyable aspect of the whole affair.

Overall, Allied is a period drama filled with stunning cinematography and physically stunning people that ultimately doesn’t carry enough heft, pace and intrigue to stun audiences on a narrative level. In a time in the cinematic calendar when Oscar contenders are starting to come thick and fast, it is safe to say that this one shouldn’t be factoring in to your thinking when trying to navigate the expensive minefield that is a trip to the cinema in the coming weeks!