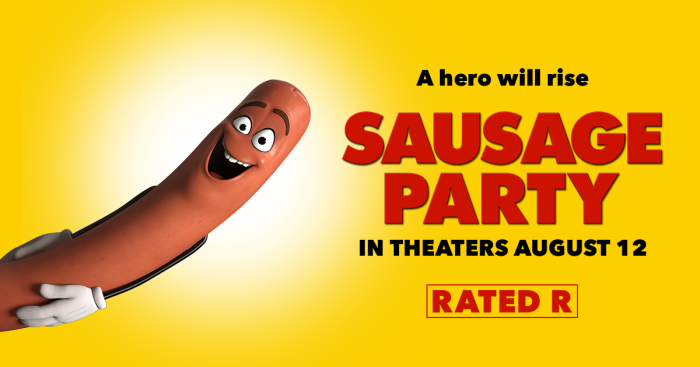 Earlier this year, the red band trailer for Sausage Party went viral quicker than any of the cutest cats, dumbest dogs, and most hilarious fall compilations out there. Seemingly innocent looking, we all soon became aware that this wasn’t going to be like all of the other summer animations streaming in and out movie theatres across the country. No sir, this one was going to be just a little bit different…

Sausage Party is an R rated animated feature from the minds of people like Seth Rogen, Evan Goldberg, Greg Tiernan and Conrad Vernon about the situation that arises when a gang of super market foods discover the truth about their lives, that they are in fact not being chosen by customers to leave the store for ‘the great beyond’, but instead being taken to meet their deaths at the hands of cooking utensils and hungry mouths. Amidst the chaos of this discovery, Frank the sausage (Rogen) and Brenda the bun (Kristen Wiig) get separated from their packages and proceed on an adventure filled journey through the aisles, whilst the rest of the narrative includes flashes of the outside world featuring the rest of Frank’s sausage buddies, and the bemusing mission of a cast away douche (yes, a douche voiced by Nick Kroll) to get revenge on the protagonists for ruining his chances of reaching ‘the great beyond’. If you feel slightly bemused by reading that summary, then you should, because the film in general is a rather bemusing experience, and in my opinion, at least, not in a good way.

The R rated movie going audience, at this point, will all have grown up very used to the idea of anthropomorphised foods and objects thanks to the genius of the Toy Story franchise, and whilst the Toy Story films brought genuine innovation and interest in their universe, all Sausage Party brings to the table is base humour and curse words for the hell of it. The premise of food that isn’t aware of its ultimate fate is one that could have been so, so good. Unfortunately, the film becomes an exercise in setting up potentially innovative comedic scenarios but repeatedly reaching for the lowest hanging fruit on the tree. Where something truly observational or clever could have been offered, instead the audience are treated to yet another sex joke, drug joke or a tired cliche or stereotype dressed up as satire (namely an Israel/Palestine metaphor that is so unbearably overplayed that any wry enjoyment from it is eradicated from sheer incessancy). Perhaps the fault is mine, as I have never been a fan of Seth Rogen’s particular brand of comedy, but I will say that in a theatre two thirds full, the most raucous it got was only a scattered tittering and assorted snorting at the handful of set pieces that were, admittedly, cynically enjoyable even for somebody like me who doesn’t find much pleasure in vulgar comedy. One thing I will say is that you will never in your life witness a sex scene like the one reserved for the end of Sausage Party. For better of for worse, it is an image that I will never be able to remove from my mind!

In terms of the voice cast, Sausage Party boasts a lot of talent, but in my opinion the talent is wasted due to the poor dialogue on show. Performers like Kristen Wiig, Salma Hayek, Michael Cera, James Franco, Danny McBride, Edward Norton, Paul Rudd and of course Seth Rogen himself all succeed in asserting themselves and giving some life to their animated counterparts, but as with any animated feature, if the script isn’t up to scratch then there really isn’t much a performer can do. As for the animation, the aesthetic of the Sausage Party universe is a nice one to look at, with lots of vivid designs and interesting choices. For such a low budget, the film looks just about on par with many of it’s better funded competitors, but with reports of many of the staff animator’s being badly treated and under compensated, perhaps that is a discussion for another time.

Overall, if I were to speak in as stereotypical terms as the movies itself does, I would say that Sausage Party will be the new fleeting favourite of every 17 year old stoner out there, and if that is your bag (as, I suspect, it is the bag of those who wrote it), then great, have a good time. But for me, the lack of any kind of comedic subtlety puts a real dent in my enjoyment. There are only so many dick jokes and drug references I can take in a 90 minute span before I start to mentally check out, and this movie more than exhausted my limits. The core premise and the world building are something that raise really interesting questions and ideas, it’s just a shame that the filmmakers, screenwriters in particular, found joy in the most base level rather than trying to come up with more innovative ways to explore the world.