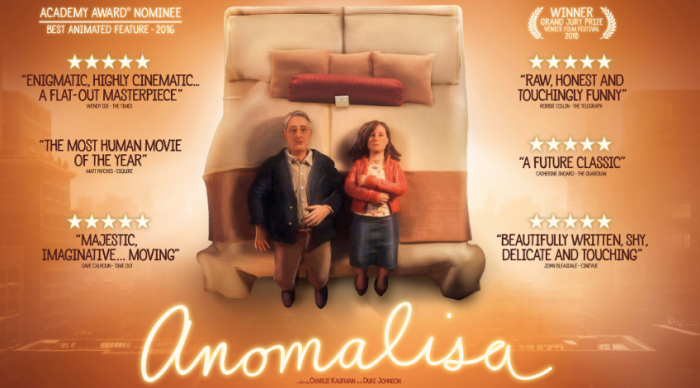 In the United Kingdom, March is a strange month in cinematic terms, half filled with complete rubbish and half filled with films that have a strong presence over the course of awards season but do not get released here until all of the prize giving fun has passed. One such film in the latter category was Anomalisa, an animated feature that many critics believe could have won the Academy Award had it not been for the seemingly unstoppable juggernaut that was Inside Out.

Anomalisa tells the relatively simple story of customer service expert Michael Stone (David Thewlis) and his overnight stay in Cincinnati, Ohio to give a speech about his successful business book. Of course, what seems like a simple premise soon turns in to an incredibly detailed and layered exploration of a man who is suffering from a severe identity crisis, with Michael failing to be connected to anything around him and searching to find some sort of spark in his life, firstly through a meet up with an old flame, and secondly through a one night affair with Lisa (Jennifer Jason Leigh), a guest in the hotel in which he is staying. Do not be mistaken in to thinking that the stop-motion animation nature of the film means it is something for children, in fact, Anomalisa is one of the most mature pictures I have seen for a very long time. Filled to the brim with melancholy and metaphors for mid life crisis, the film’s choice of format allows it to do a number of really interesting things in terms of portraying Michael’s problems to the audience. For example, every single character with whom he comes in to contact, including his own wife and child, is narrated by Tom Noonan and has a more or less identical animated face. This is in stark contrast to Lisa, voiced by Jennifer Jason Leigh, who sounds like a breath of fresh air to both the protagonist and the audience and helps to instantly create a reasoned connection between the two of them. The incredibly slow pace of the film might put some impatient viewers off, but for those who can persevere, the slow burn nature of the picture lulls you in to a sense of the mundane that perfectly typifies Michael’s life, and when the narrative experiences a peak or crescendo, the sombre base that has been provided makes these bursts of activity even more effective and powerful. For those not tempted by the film’s animated format, the closest recent comparison that one could make between Anomalisa and another picture is 2015’s 45 Years starring Charlotte Rampling and Tom Courtenay. Though one is a straight drama and the other is a quirky animation, both pictures exquisitely portray a kind of introspective sadness that touches the soul of the viewer, examining relationships and the ways in which they can be irrevocably damaged by time and by secrets. Though I have enjoyed other releases more in the last few months, what I will say is that Anomalisa is without a doubt one of the most unique films I ever seen. The realm of animation rarely lends itself to real, adult drama, so when it is done in a touching and evocative way, the results can be truly mesmerising.

It would be fair to assume that Anomalisa might boast one of the smallest cast lists for any animation you have ever seen. With Tom Noonan providing every single supporting character’s voice, the bulk of the work is left to David Thewlis as Michael and Jennifer Jason Leigh as Lisa to bring to life engaging and enjoyable characters for the audience. Uttering a thick, Northern English drawl, David Thewlis injects an important dose of pathos in to Michael’s persona, and the actor uses his voice expertly to walk a fine line between making the character likeable enough but occasionally venturing in to unbearably melancholy and unsympathetic territory. As Lisa, Jennifer Jason Leigh offers the complete opposite, a bright, bubbly, unassuming personality that manages to beautifully contrast Michael yet at the same time highlight an gap between the two that feels impossible to fill.For two stop motion animation creations, both characters feel incredibly real, and that is thanks in large part to the stellar voice work of the film’s two leading stars.

Overall, Anomalisa is a wonderfully unique film that utilises an inherently childish format to tell an inherently mature story about love, loss and the fragility of mental health. It is interesting to think that the two best animations of the year both entered around exploring human emotion, yet yielded such varied results. Sure, Inside Out is nothing short of a masterpiece and an education for young and old alike about the machination of your inner most feelings, but what Anomalisa has to say can really only be digested by a mature audience who know exactly what it feels like to tread water in an ocean of emotional distress without the help of five jolly, multi coloured representations to guide you along the way. Highly recommended.