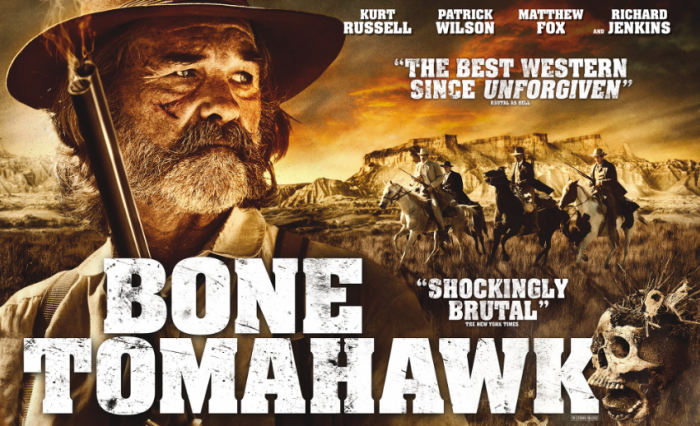 After the large predictability of a rather tense and agenda filled Oscars ceremony, the part of my brain solely dedicated to the enjoyment of cinema wanted something that was going to blow away all the cobwebs of awards season and give me a rollicking good time. After a quick browse through my favourite sources, I was confidently informed that the newly released and little hyped Bone Tomahawk would be the perfect medicine for my temporary filmic ailment. So with my trust in my critical peers, forward I ventured in to the relative unknown.

And by God, I was not disappointed. Set in the always horrendous seeming Old American West, Bone Tomahawk is a genre defying Western Horror that centres around four men’s journey in to unknown territory to rescue some townspeople who have been kidnapped by a clan of mysterious and incredibly dangerous troglodytes. The intrepid group is comprised of Sheriff Franklin Hurt (Kurt Russell), hapless backup deputy Chicory (Richard Jenkins), local womaniser John Brooder (Matthew Fox) and Arthur O’Dwyer (Patrick Wilson), a man with a severely injured leg and husband to Dr. Samantha O’Dwyer (Lili Simmons), the woman whose kidnap has inspired the entire adventure. With the harsh elements and Arthur’s ailing health with which to contend, the bulk of the narrative focuses on the long march through the wasteland, and this portion of the film operates very much in the fashion of a traditional Western story arc. With lots of intriguing and charismatic dialogue between the characters and the inclusion of customary obstacles such as camp intruders, infighting and the like, the film feels familiar in a sense, but what gives it an innovative edge is its vein of real and genuine humour that remains constant throughout. The best way I can think of to describe the vibe that the film’s offbeat humour evokes is that it feels like a combination of Wes Anderson, the Coen brothers and a restrained Quentin Tarantino. This tone puts the audience in a very comfortable and unassuming mindset, and it is this skilled world building that makes the explosive final third of the picture one of the most memorable final acts in a film I have seen for quite some time. In an instant, Bone Tomahawk transforms from a rambling but satisfying slow burn in to an absolutely brilliant portrayal of utter, horrifying chaos. To give away any of the final act’s details would be to deny you a real cinematic treat, but what I will say is that some of the set pieces and violent encounters that are executed when the final showdown occurs are quite unlike anything I have ever seen, equally as horrifying as the very worst of Saw or Hostel, but inherently more ‘classy’ feeling if such a comparison was valid to be made! The light and shade that is captured by the filmmakers from beginning to end makes for a thoroughly nuanced and enjoyable journey for the audience, and though the full range of tempos are explored, the film always feels in control of its narrative and, most importantly, it doesn’t feel disjointed or forced in any way. Bone Tomahawk by no means reaches Mad Max: Fury Road levels of craziness, but in a month where no real stand out films are being released, this Western Horror will certainly give you the shot in the arm that need. 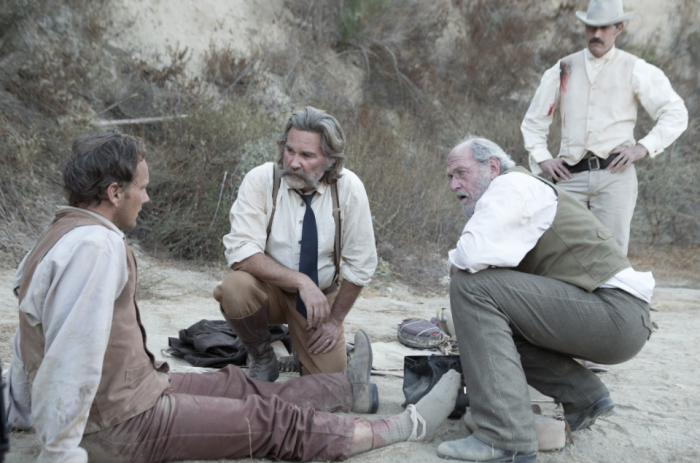 Playing a role that doesn’t feel too dissimilar to his recent turn in The Hateful Eight, Kurt Russell is definitely the on screen presence that acts as the glue for the film. Though Sheriff Hurt is a much more upstanding citizen than Tarantino’s creation John ‘The Hangman’ Ruth, both characters share a sense of respect and strong will that immediately draws an audience towards them. Alongside star man Russell, three very different but equally great performances are given by Richard Jenkins, Matthew Fox and Patrick Wilson as the other members of the fearless group. Though each character embodies a different personality type from earnest to determined to sardonic, all of the actors play off of one another to create some really enjoyable dynamics that keep the audience engaged when the film is operating in its most quite and unassuming passages. Though the picture very much exudes an aggressively masculine tone, the brief but striking performance given by Lili Simmons as the kidnapped Samantha provides just a touch of balance and the genuine love that one can feel between her and husband Arthur is effectively portrayed in very little screen time. All in all, the casting choices made help to fully realise these characters who are responsible for holding together the bulk of the narrative before the carnage of the third act begins and sheer physical set pieces take over.

Overall, Bone Tomahawk is an absolute hidden gem of a film that needs to be seen by as many viewers as possible.Two of my favourite films in the last five or six years have been True Grit and Mad Max: Fury Road, and in a way this feels like an amalgamation of the two, containing much of the engaging and endearing dialogue of the 2010 Coen brothers Western and giving us just a little of the insane violence and out of nowhere action that made George Miller’s latest picture so revolutionary. If you have looked at the poster and automatically assumed what the film is going to be like, you’re wrong. You’re so, so wrong.