For a person who loves sports movies, I have always had something of a distant relationship with the Rocky franchise. I saw the original, Best Picture winning film some years ago, and since then have perhaps seen two others in no particular order, with a definite trip to the cinema to see 2006’s Rocky Balboa somewhere in there. However, with the latest instalment of the series, Creed, picking up praise and awards recognition the like of which as not been seen in the Rocky universe since the 1976 original, I thought now would be the perfect time to become reacquainted with the iconic character and his adventures.

Creed, aptly titled, is the story of Adonis Creed (played by Michael B. Jordan), the illegitimate son of Rocky’s biggest rival and good friend Apollo Creed who has decided to follow in his father’s footsteps and enter in to the world of professional boxing. Leaving his life of riches and privilege with Apollo’s widow (Phylicia Rashad) behind, Adonis travels to Philadelphia to seek out the famous Rocky Balboa (Sylvester Stallone) and enlist him as a trainer. After the customary initial doubts and obstacles that precede any mentor/mentee narrative, the film settles in to a comfortable and familiar rhythm of training montages and fights until the audience are thirsty enough for the final climax, in this instance a title fight with world light heavyweight world champion ‘Pretty’ Ricky Conlan (Tony Bellow) in Liverpool, England. In terms of the Rocky universe, the film feels like the perfect transition in to a new and credible era in the long term story. For Rocky to become a mentor figure, at his and Sylvester Stallone’s age, was the only logical move to keep his presence in the films in a meaningful and plausible way. And although it is certainly a crowd pleasing move to have Rocky back, what makes Creed more than just a lazy rehash of a franchise is that it is actively moving the universe in to new territory whilst simultaneously respecting its history and tying its new characters to important people and plots from the series’ rich history. As with Star Wars: The Force Awakens a month ago, the film is filled with little references and nods to the most loved parts of the old series, for example, an appropriately timed emotion swelling return of the iconic theme, call backs to the fates of characters like Paulie and Adrian and a perfectly pitched journey up the steps of the Philadelphia Art Museum, this time a much harder task for our ageing hero. In terms of enjoyment and cinematic merit outside of the Rocky fandom, Creed, on its own, has just enough quality to make it a worthwhile watch for even the most casual of viewers. It ticks all the boxes with regards to satisfying character arcs, narrative interest and audience attachment, but whilst it might be seen as one of the best movies in its particular franchise, I cannot see the picture troubling the top of any all time sports films lists in the future. Ultimately, with Creed, the filmmakers have managed to successfully bridge the gap between old and new in the Rocky universe, and they have done it in such a way that somebody would have to go in with pretty stratospheric expectations to be let down or disappointed. 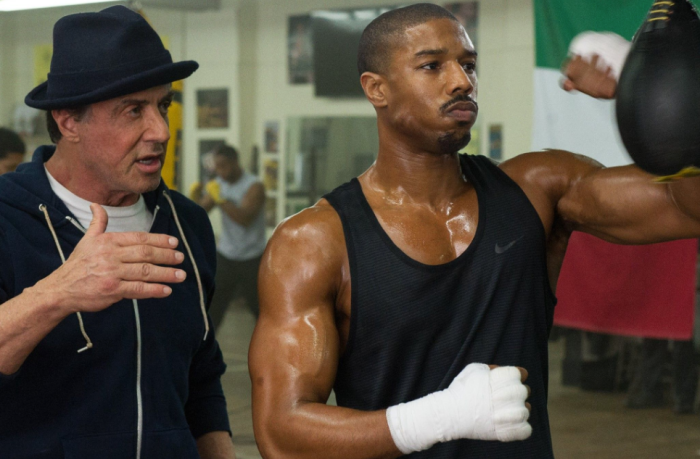 Any fears that Sylvester Stallone would be back in cringe-worthy self parody mode can be thankfully allayed, with iconic action star turning in a surprisingly deep and nuanced performance as the character of Rocky moves in to a completely different period in life with brand new challenges. Of course, there are times when Stallone sounds like he could do with his own personal set of subtitles, but he clearly still holds a lot of affection and respect for Rocky. Though I feel his Golden Globe win and upcoming Oscar nomination are perhaps a little too much, a celebration of a star’s comeback rather than an authentic reflection of the performance given, Stallone certainly proves that at 69 years old, he still has some acting punches to throw yet. As the titular character Adonis Creed, the filmmakers have made a stellar decision in the casting of Michael B. Jordan. From his early work in HBO’s The Wire to more recent turns in Friday Night Lights, Parenthood and Fruitvale Station, Jordan has proved himself to be one of the best young actors in Hollywood right now. As Adonis, he possesses the perfect amounts of steel, determination, empathy, honesty and guts to be a capable future hero of this franchise, and Jordan’s natural charisma makes him an enigmatic presence on screen, holding his own in the many scenes he shares with Stallone and immediately winning over the audience, which is an absolute must when it comes to protagonists in sports movies. Together, the two actors share a natural and comfortable on screen chemistry, helping the audience to invest in the narrative and believe in the unspoken history that the characters and their extended families have shared.

Overall, Creed is something of a return to form for a franchise that many years ago began to lose its way when it turned it’s iconic protagonist from a humble fighter in to a superhero figure who could end the Cold War. Not only has Rocky returned to a more human, relatable form, but he has also successfully handed over the reins to a new leading character not only looks set to carry the series for at least a few more good years, but also to an actor whose profile and career looks set to rise and rise along with it. A satisfying watch for franchise fans and casual film goers alike.