It’s been quite a while since I saw a female buddy movie that actually delivered in terms of real humour and enjoyable plot. In fact, I would perhaps go as far back as The Heat for a picture in the genre that truly left me satisfied and wanting more. Sisters, though, on the outset, looked to be a film that would deliver everything I look for in a movie of this type, a great cast, a simple, uncomplicated premise and plenty of room for the magic to happen. Would the comedy live up to my expectations or would it leave me somewhat flat like both Addicted To Fresno and Hot Pursuit did earlier in the year?

Overall, I would have to say that Sisters falls somewhere in the middle of my enjoyment and expectations.Written by Paula Pell and starring Tina Fey and Amy Poehler, the film is an SNL reunion of sorts about two middle aged sisters who travel back to their childhood Florida home to throw one last ‘high school’ party before their parents complete the sale of the house. Kate (Fey) and Maura (Poehler) are polar opposites, the former being the wild child irresponsible party girl and the latter the sensible ‘party mom’ who never truly got to let her freak flag fly. The bulk of the narrative revolves around the house party, and in typical fashion, the night is filled with chaos, calamity and comedy that, whilst not always hitting the mark, provides enough entertainment to make the film an overall enjoyable enough watch. Sisters is at it’s best when the humour comes from sharp, witty dialogue between the film’s vast array of characters, but it’s tendency to revert to cheap, gross out humour for a quick shock factor laugh is where the quality tends to drop a little. At two hours in length, there are certainly points at which one can’t help but feel that the filmmakers have become a little over indulgent in letting certain jokes and set pieces carry on for much longer than was needed to make an impact. Like many comedies that fail to exercise restraint, this one feels very much like a classic case of the actors having more fun making it then the audience have fun watching it, which is a great shame because amongst the messiness of the plot there are more than a handful of truly hilarious moments that had me laughing out loud again and again. It feels at times that the film could have been more economical in its story telling in order to provide a more streamlined, tidy package, but ultimately I feel there is enough to enjoy along the way that it is worth buckling in and going on the crazy ride. I will say that the idea of a group of 40 year olds holding a teenage party certainly does make for a good comedy breeding ground, the feeling of excess clouds some of the funnier moments and doesn’t allow them to really sit and resonate. One particular character is lambasted throughout for being constantly ‘on’ and trying to tell too many jokes at once, ironically this is something that the filmmakers needed to be aware of themselves. 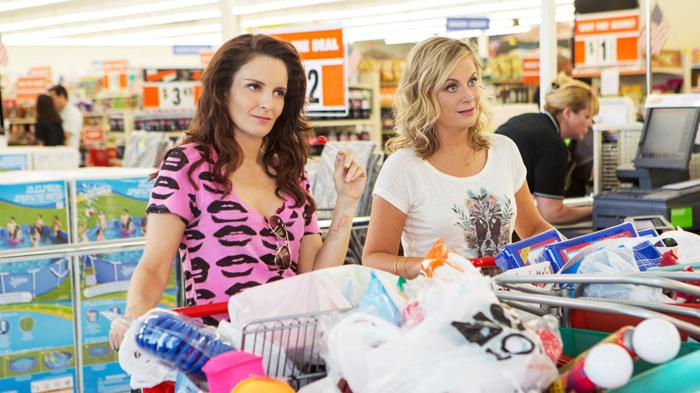 Let’s be real, the combination of Tina Fey and Amy Poehler was always going to be a winning one, and the time they share together on screen predictably encompasses the film’s greatest moments. With Fey as the rebellious Kate and Poehler as the straight laced Maura, the actresses certainly feel like they are playing opposite to type, but the sisterly chemistry they share is believable and enjoyable and I lap up any chance I get to see the two of them doing their thing together. The main problem is that I can’t help but feel that the actresses deserve better than the material with which they had to work. Paula Pell’s script certainly has some golden moments, and perhaps this is purely my personal preference, but I would say that Fey and Poehler are put to better use shooting out hilarious one liners than they are falling through dry wall ceilings and the like. The supporting cast of middle aged party goers is as stellar as you would wish to see in a comedy film, with the likes of Maya Rudolph, Rachel Dratch, John Leguizamo and Dianne Wiest all doing their best with the little time they have. And a special mention for John Cena who with his surprisingly funny performance in Trainwreck and now Sisters, is giving Dwayne ‘The Rock’ Johnson a run for his money in the movie star wrestler stakes.

Overall, Sisters is a film that I enjoyed in parts and will certainly be more than worthy of a spot on the rotation of female centric comedies that get brought out every time the girls are round. It definitely could have been tighter, and it definitely could have exchanged certain set pieces for funnier ones, but at the end of the day you know you are going to have at least a 6/10 time with the likes of Tina Fey, Amy Poehler and co. in the driving seat.