During the summer holiday months, the one thing I cherish more than anything at the cinema is a film that small children are not permitted to see. Not only did Judd Apatow’s latest directorial offering Trainwreck provide me with this youngster free solace, but it also just happened to be one of my most anticipated films of the year ever since seeing the first trailer. Dearly hoping that this was not going to be a case of the teaser containing all of the film’s funniest moments, I settled in with the hope of having a good old laugh away from the rustling and squawking of the younger holiday crowds.

It was only last week that I reviewed Hot Pursuit, a film that continually spoke of its lead character’s flaws and problems but never really presented anything but a classic example of unattainable Hollywood beauty in both Reese Witherspoon and Sofia Vergara. What is so refreshing about Trainwreck is that, well, you actually believe that protagonist Amy Townsend (Amy Schumer) is exactly how the title describes. The film depicts a period in Amy’s life that details the declining health of her father (Colin Quinn), a tense relationship with her sister (Brie Larson) and the magazine writer’s first real attempt at an adult relationship with specialist sports surgeon Aaron Conners (Bill Hader). Like all of the best recent adult comedies, Trainwreck deals with both trivial and more serious themes in a natural manner, finding a degree of humour in every situation but not in so heavy handed a way that you feel assaulted by the flow of jokes coming your way (I’m looking at you again, Hot Pursuit). What makes the regularity of comic moments less potentially exhausting is the fact that overall, the film is truly funny, producing more laugh out loud moments than I could count on two hands. The narrative relies just as much on enjoyable and hilarious celebrity cameos as it does impressive performances by its leads. Though these numerous cameos may prove to date the film horribly in years to come, every single one of the contributing players pulls it off excellently, and some of the films most memorable moments come at the hands of sporting megastars who are not afraid to show their silly sides. Written by and starring Amy Schumer, the picture has her distinctive comedic style and DNA all over it, with the humour sharp and cynical with plenty of vulgarity to bump up the certificate. Though the overall story arch is nothing out of the ordinary when it comes to raunchy romantic comedy plots, what makes Trainwreck slightly different is the gender swapped nature of the character profiles. Rather than the Vince Vaughn, Jason Segel type loser who needs to sort himself out to live happily ever after with the put together career girl, it is Bill Hader’s Dr. Conners who must look past and accept Amy’s numerous flaws in order to find true love, something that could be seen as innovative for this kind of picture. My sole complaint about the film is that at two hours in length, it feels a tad bloated and although admittedly funny and enjoyable throughout, is easily a good twenty to thirty minutes too long and could be cut down to form a much tighter and more succinct story. 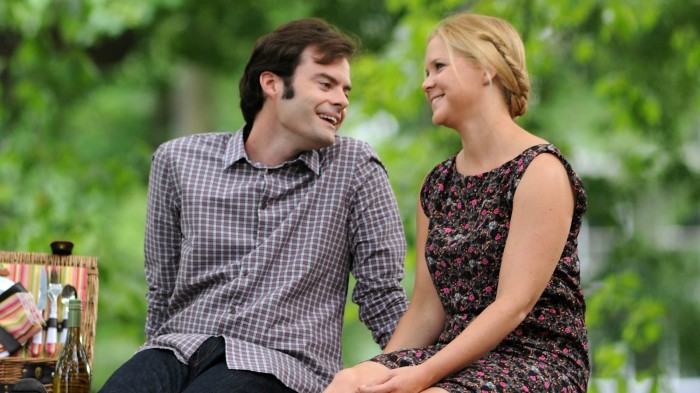 It is hard to imagine any other actress in the lead role than the film’s writer Amy Schumer. Schumer embodies the exact blend of unconventional sex appeal that her same named protagonist possesses, and in her body language and overall demeanour effortlessly manages to convince the audience that yes, she is a ‘train wreck’, but she is also a woman that deserves to have a respectable, stand up guy like Dr. Aaron Conners be madly in love with her. Clearly comfortable performing her own brand of comedy, Schumer lights up the screen in each of her scenes and gets away with doing plenty of questionable things whilst still remaining likeable. Bill Hader as the straight laced, awkward, introverted Dr. Conners provides the perfect balance of shade to Schumer’s overbearing light. His performance is sensitive and instantly likeable, and the on screen chemistry that the pair share is stronger than many partnerships audiences have been forced to believe in over the years. Though both are absolutely good looking, neither possess the shiny, over the top Hollywood good looks that likes of films like How To Lose A Guy In 10 Days present to us, and because of this their relationship feels so much more authentic and relatable, a really great pairing. I’ll avoid giving specifics on the film’s many cameos as the less viewers know beforehand the better, but stand out turns are given by John Cena, Tilda Swinton and LeBron James, with a whole host of further well known faces popping up at perfectly timed moments to keep the laughter flowing from start to finish.

Overall, Trainwreck is an unconventional romantic comedy that above all else is really, properly, laugh out loud funny. The audience are treated to humour in terms of relationships both romantic and familial, with an equal amount of heart to balance out the slapstick and verbally hilarious antics of the plot. There is no doubt that this is Amy Schumer’s film, both in terms of creative ownership and stealing the show. Much like Bridesmaids and others like it, it is easy to see Trainwreck becoming a measuring stick for future films in a similar mould, and it will no doubt enter in to heavy and regular rotation for girly get togethers as soon as it becomes available for the home. Highly recommended for anybody looking for a couple of hours of hilarious yet heartwarming entertainment.