The sports movie seems to be an entity that has been in decline in the last ten or so years. Give or take a few broader themed exceptions such as The Blind Side, The Wrestler and Foxcatcher, it has been slim pickings for fans of the genre (of which I am one). Boxing and cinema have always had a rich and successful relationship, with pictures like Raging Bull, Million Dollar Baby and the Rocky series ranking among the best sports films of all time, so when director Antoine Fuqua’s latest offering is repeatedly mentioned in the same breath as some of these classics, one can’t help but get a little bit excited.

Southpaw tells the story of boxer Billy Hope (Jake Gyllenhaal), the Light Heavyweight champion of the world whose life is turned upside down when his wife Maureen (Rachel McAdams) is shot in killed during a hotel foyer fist fight between him and a cocky, up and coming rival Miquel Escobar (Miguel Gomez). Faced with his enormous grief and a young daughter Leila (Oona Laurence) to raise alone, Billy spirals in to a vicious, alcohol and drug filled depression that sees him lose his titles, his money and his daughter to social services, and the film’s narrative focuses, as so many boxing films do, on the against the odds comeback of a once great champion. One of the many great aspects of Southpaw is that, unlike many lesser sporting films, the outcome of the ‘final fight’ is kept much more ambiguous and nail biting. The filmmakers have done a fantastic job of giving the audience no choice but to heavily invest in the fate of the protagonist, and rather than signposting the conclusion, you are left truly on the edge of your seat as to how Hope’s final, all important bout will end. A particularly noteworthy element of the film is its diverse use of cinematography, displaying a great combination of stylised, vibrant boxing action set pieces with a much grittier, greyer, less energetic filter that highlights the distinction between how Billy feels in the ring compared to the overwhelming darkness outside of it in his personal life. Southpaw utilises all of the well worn tropes of the traditional boxing movie, a villainous rival antagonist to root against, a handful of satisfying training montages, and most importantly the Yoda like trainer figure whose purpose is to mastermind the unthinkable comeback, this time in the form of stern, no nonsense amateur trainer Tick Wills (Forest Whitaker). Though all of these tropes are expected and far from original, the execution is solid and nothing about the film feels contrived or tiresome, it is simply a great boxing picture that, whilst feeling familiar in content and theme, is nonetheless enjoyable and impressive for covering the traditional bases. The filmmakers have managed to create some of the most realistic boxing action I have seen in film for a long time, perhaps ever, and the result is compelling sports drama that is equals parts dramatically engaging and sportingly satisfying. 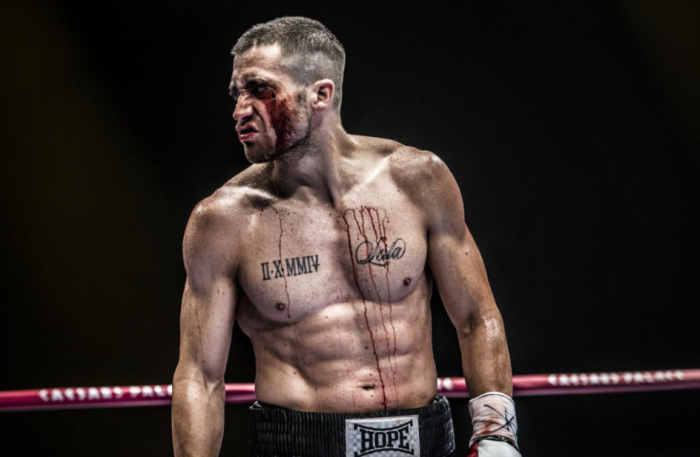 Jake Gyllenhaal gives a committed and commanding performance as Billy Hope, accomplishing Daniel Day-Lewis levels of physical change when compared to his last high profile turn in Nightcrawler. The fact that Eminem was originally intended to play the lead is a bizarre thought, as Gyllenhaal brings levels of emotion and dramatic prowess that I don’t feel the rapper could have even started to replicate. Gyllenhaal is believable as both a boxer and a father, a vital requirement for encouraging the amount of audience connection that he achieves. Rachel McAdams, though admittedly not on screen for long, gives a striking and important performance, as the chemistry that her and Gyllenhaal create lays out the sole foundation of the audience supporting Hope’s ambitions for the rest of the film. To put it simply, if we didn’t care about them as a couple, we wouldn’t be invested in the bulk of the narrative. Fortunately for the filmmakers, Gyllenhaal and McAdams make for an endearing and authentic partnership on screen, and their family unit is completed with a surprisingly layered and impressive performance by young actress Oona Laurence as Leila. Laurence is tasked with appearing in many of the more emotional scenes in the film, which she takes in her stride and proves to be more than a match for the star power of her adult costars. Forest Whitaker gives a solid enough performance as inspiring trainer Tick Wills, but given his breadth of work and the range we know he has, and perhaps the cliched nature of the character, it ultimately feels as though he is acting somewhat within himself, not underperforming or over performing, just providing a strong enough partner for Gyllenhaal for the majority of the picture.

Overall, Southpaw is an engaging, enthralling and at the right times edge of the seat boxing movie that, whilst not taking too many risks and abiding more or less to the classic genre tropes, provides a compelling and satisfying two hours of entertainment. In Billy Hope the audience are given a flawed but ultimately loveable protagonist for which to root, and the combination of thrilling sports action and emotional family drama evokes memories of and similarities to many of cinema’s most beloved sports movies. Highly recommended.