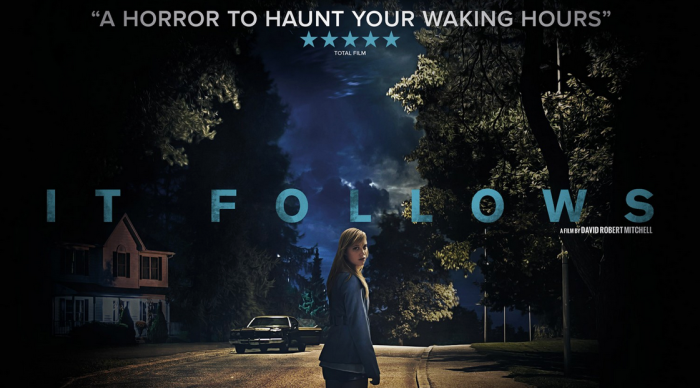 In a week where Shaun The Sheep and The Second Best Exotic Marigold Hotel seemed to be the only options for a visit to the cinema, I received a text from a friend enquiring if I would like to go and see a horror film about which I knew extremely little called It Follows. After a quick google search I found that the film, under the radar in the UK, at least, had quietly managed to gather a plethora of very positive reviews and picked up a number of useful feedback tag lines lauding it as one of the most frightening pictures in recent years. With the hype from my friend and from the critics in mind and with little interest in sitting through either of the other cinematic choices for the week, in to It Follows I went.

There are plenty of things I liked about It Follows, but there are also plenty of things that I did not. The film tells the story of Jay (Maika Monroe), a teenage girl who, after an innocuous and consensual sexual encounter with a date, finds herself in the middle of a psychological and supernatural nightmare. Jay’s date reveals to her that, in their act of love making, a strange ‘curse’ has been passed on to her which means that she will be followed and eventually killed by a mysterious body shifting entity. That is, unless, she can pass on the curse by doing the very same thing and having sex with another and so the chain continues. With the help of her sister and a group of friends, the narrative proceeds as a mixture of running from this slow moving pursuer and coming up with a plan to defeat it once and for all, with plenty of classic obstacles along the way. As I said, there is a lot to appreciate in It Follows, namely the interesting premise which is essentially a ‘genrefied’ metaphor for teenage sex fear and the snowballing nature of sexually transmitted disease. This promising premise is also accompanied by a really enjoyable and effective musical score that pays homage to the synth heavy music of previous horror classics like John Carpenter’s Halloween and George Romero’s Night Of The Living Dead. The film also boasts an interesting and well executed ‘era-less’ feel, with a predominantly 1970s aesthetic being punctuated with the inclusion of modern technology in various forms that leaves the audience in a confused state that really adds to the unsettled tone of the picture. However, where It Follows begins to crumble for me is in the fact that, quite simply, the film is just not very scary. Despite many critics calling it one of most affecting and frightening films in recent times, I found very little within the picture that raised my blood pressure or forced me to hide my eyes behind my hands, and because of this I was left with an overwhelming feeling of anticlimax. In addition to this, one of my main bugbears in cinema is when characters make decisions that are so ineffectual or unreasonable that it takes the audience out of the fictional experience and leaves them questioning the storytelling skills of the filmmakers. Granted, the horror genre is perhaps the biggest culprit of the cinematic ‘stupid decision’ club, but there are a number of occasions in It Follows, including a rather baffling climactic confrontation scene, that I feel let down what could have been a really interesting and innovative piece. 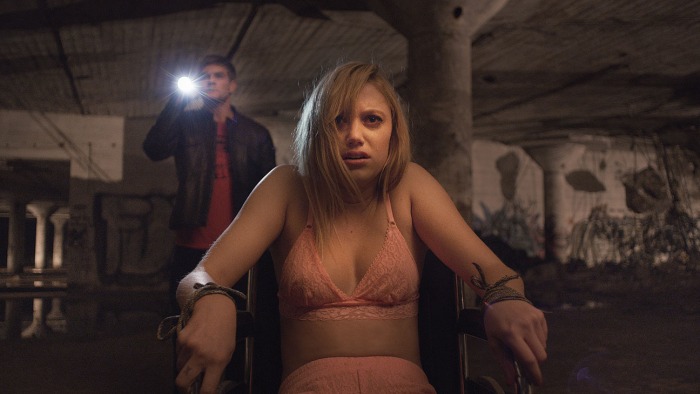 The entire film operates in a fairly minimalist fashion including its tight group of main cast members. For such a relatively inexperienced actress, Maika Monroe does carry the film rather well and is tasked with having to create slightly more nuance than the average teen scream queen nowadays. For a heavy portion of the narrative the bulk of the film’s supernatural elements are restricted to her experience only, and the way in which she manages to convey this distress whilst at the same time having to contend with her sceptical friends is well done and enjoyable to watch. Jay’s gang of family and friends are played by Keir Gilchrist, Jake Weary, Daniel Zovatto, and Olivia Luccardi, and each actor gives a solid performance that proves neither stand out nor detrimental. For a film that mostly involved teenagers running from place to place, the filmmakers do manage to get the audience to form some sort of attachment to Jay and to her struggle. Though I would not say I was fully invested, mainly down to the dubious decision making in the story telling as mentioned above, I did move in to the film’s final third with a vested interest in how the narrative panned out, something that I can certainly say does not happen with a very many boring and cliched teen horror flicks in the past.

Overall, It Follows is definitely something different that deserves recognition for an innovative premise and metaphorical take on horror, but due to poor execution of key plot points it falls short of really impressing.The film’s technical elements including score, set design and cinematography help to elevate it in to a category with some of the better looking and feeling recent horror offerings, but a missed opportunity with regards to really nailing the meat of the piece left me somewhat disappointed and wishing that this was just a first draft rather than a final cut.