Have you noticed that my recent reviews have all suddenly become much more positive? This is not a coincidence, it is my favourite time of year in which the majority of the year’s best films are unleashed upon the world in hope of picking up a few prizes in the next few months. Whilst the bigger films have arrived with a long train of fanfare and publicity behind them, others, like St. Vincent, seem to have turned up with less expectation, ready to throw their hat in the ring. The trailer piqued my interest for two reasons, one, Bill Murray is something of a God, and two, it appeared as though Melissa McCarthy would finally be shaking off the shackles of her type cast character pieces started by Bridesmaids and continued by The Heat and Tammy. So in a went with the hope that St. Vincent would be just the film I hoped it would be.

Thankfully, I was not disappointed. The sorts of films that come to mind when trying to categorise St. Vincent include Little Miss Sunshine, Way, Way Back, even pictures like Juno or Whip It. They all share a relaxed, comical and heartfelt sensibility that makes for incredibly enjoyable and fulfilling viewing. Bill Murray stars as titular protagonist Vincent, on first impression a sloppy, self interested, gambling drunk, whose life is interrupted by the moving in next door of Maggie (Melissa McCarthy) and her son Oliver (Jeaden Liberher). Struggling with a custody battle and long work hours, Maggie is forced to rely on Vincent for after school child care, and for the unsympathetic fee of $12 an hour, Oliver and Vincent begin their unlikely relationship. The film progresses in the way in which you would expect give or take a handful of refreshing and interesting obstacles, but the pleasant discovery is that the audience do not care that they may be able to predict certain conclusions because they are having too much fun in the company of the characters. We learn that Vincent, whilst seeming one of the most selfish men you are ever likely to meet, is a much more complex character than his stereotype would suggest. The narrative dynamic between a character so deadpan and downbeat versus the innocent inquisitiveness of his young charge Oliver provides an engaging and satisfying experience for the audience. I have seen the film criticised for its tendency to verge in to heartstring tugging schmaltz, and it is true that the score begins to swell at certain moments and the dialogue can stray in to emotional monologue, but the film is earnest in its intentions and even though I could feel these moments approaching, I welcomed them and didn’t mind at all the sentimental edge that the picture offered. Crucially, mixed with this sentiment is an extremely effective level of dark and sarcastic humour. Many of the themes explored within the film, divorce, mental illness, crime, are all treated with a certain reverence but handled in such a way that the comedy found in these situations seems effortless and true to life. The majority of the film’s laughs come not from physical gags or slapstick but from intelligent dialogue and humorous situations, a comic route that I much prefer. 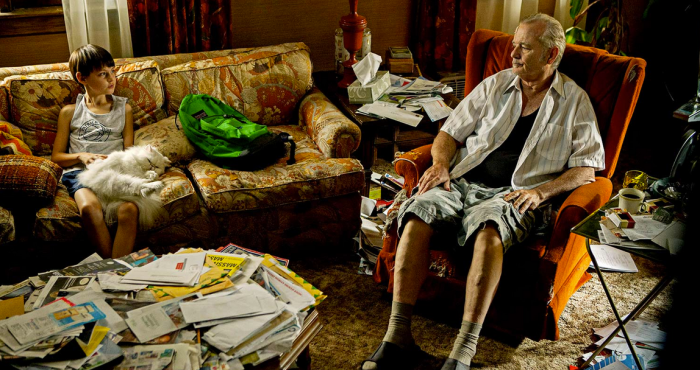 A real character based film like this needs a strong set of actors to carry it, and Bill Murray is the perfect choice for the role of Vincent. Murray’s lackadaisical style has rarely been more suited to a character. His comical expertise and masterful subtlety help Vincent to feel like an authentic character instead of a cliched, pantomimed grump. His real life reputation for being a super cool guy also stands him in good stead, as the audience really do believe that a twelve year old boy would want to hang out with him and the on screen chemistry between Murray and Jeaden Liberher is a pleasure to watch. In fact, I would go as far as saying that Liberher on multiple occasions succeeds in stealing the scene from his seasoned colleague. It is so often the child actor that lets film like this down, but in this instance it couldn’t be further from the truth. Liberher is excellent as young Oliver, giving an enigmatic and authentic performance that the audience really connects with. Admittedly he had great dialogue with which to work, but the young actor was truly impressive and a possible star of the future. In a refreshing casting choice, St. Vincent is proof that Melissa McCarthy does not have be vulgar to be funny. Playing against what has come to be regarded as her usual role, McCarthy gives a restrained performance as a hard working mother battling for custody, and does so with such skill that her natural comic talents shine regardless and emerge in a much more subtle way than the gags that she is usually forced to punch through. Supporting roles of differing success are played by Chris O’Dowd and Naomi Watts, the former as a wise cracking school teacher and the latter as a rather out of place Russian prostitute with a questionable accent. But not even Watts’ poor rent-a-Russian characterisation could stop me from having a blast.

Overall, St. Vincent, is the the kind film that, after watching, makes me think “ah, I love films”. Sentimental seems to have become a dirty word in cinema these days, but I have no problem with schmaltz in moderate quantities. The film is only one of very few this year that I have wanted to watch all over again right away. It is sweet, it is hilarious, it is fun and it has a message. Cinematic cynic’s might disregard it, but that would be a mistake on their parts, not everything has to be Requiem For A Dream. A crowd pleasing journey that has certainly found its way in to my top ten of the year.