Do not be afraid or confused, you are still on Oh! That Film Blog! After some consideration I have decided to introduce TV Corner, a place where I can write and rant about some of the television shows that are quickly becoming direct competitors to the star quality and craftsmanship of the big screen. TV Corner will mostly consist of series roundups and reviews of any show’s season that I have had the will power to watch the entirety of, but to kick it off I thought I would take advantage of current events and explore Amazon’s most recent Pilot Season. Pilot Season is a relatively young and innovative project undertaken by Amazon in which they offer the first episodes of a handful of new shows to be watched and judged by the viewing public, whose responses then help to determine whether the shows are green lighted for full seasons. Here are my thoughts and feelings on the batch of televisual hopefuls in 2014.

Synopsis: “A morally-corrupt judge suffers a breakdown and believes God is compelling him onto a path of vigilante justice.”

Ron Perlman takes centre stage in this incredibly dark and sinister drama playing Pernell Harris, a corrupt judge who experiences a religious rebirth following the attempted suicide of his son who is now hospitalised in a vegetative state. His son’s actions are discovered to be part of the aftermath of the violent rape of his wife Jocelyn (Alona Tal), and using the apparent guidance of God, Harris begins to embark on a campaign of vigilante justice to find the unidentified perpetrator of the crime. Surrounded by a stellar cast including Dana Delaney as his wife Crystal and Andre Royo as the town Mayor, Hand Of God is a visceral and utterly compelling watch.

Synopsis: “A coming-of-age comedy set in the “go-go” 80s about a college student enjoying a last hurrah before summer comes to an end–and the future begins.”

Red Oaks takes advantage of the contemporary nostalgia for everything 1980s in this hit and miss coming of age comedy. Craig Roberts plays David, a relatable young adult who is unsure about the direction of his future both in terms of career and romance. Working at a country club over the summer gives the show a lot of room to portray humorous and outlandish characters, most pleasingly Ennis Esmer as senior tennis coach Nash. The pilot had its moments but overall fell a little flat for me. Great accompanying soundtrack but didn’t pack enough punch with its one opportunity. 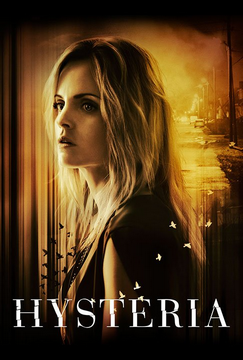 Synopsis: “A doctor travels to her hometown of Houston to investigate an epidemic among high school girls that may be spreading through technology.”

My opinion on Hysteria is slightly marred by the fact that I am not convinced by the acting skills of Mena Suvari. The premise seems to be setting up an exploration of how modern social media and technology can spread psychological disease without immediate contact, which I feel will ultimately limit the shelf life of the series. There are a handful of subplots competing with each other, the most interesting for me being an underage affair between one of the leading young girls and a Houston policeman, perhaps indicative of my preference for social drama over high concept and farfetched narratives.

Rating: 7/10
Verdict? – Not immediately hooked, but would be interested to see how it pans out.

Synopsis: “A comedy that revolves around an opinionated group of thirty-something friends in Chicago.”

Really wants to be a cross between Sex & The City, Friends and Parenthood but fails to be anything near as funny or entertaining. The group of thirty-somethings, whilst being well acted by the cast, are all rather smug and lacked any significant depth. Admittedly this was only a thirty minute introduction, but nothing about the narrative piqued my interest. We do not need another show that quirkily displays the marriage crises of couples that are going through rough patches, it is well worn ground that has been too well perfected by other shows before. Perhaps I am not the right demographic but it left me cold.

Synopsis: “A dramatic comedy about a group of young American expats in Paris searching for love and friendship and an ocean of distance from their past.”

The Cosmopolitans is a strange drama comedy that doesn’t quite find its groove in the pilot. It is clearly pulling inspiration from the whimsical love themed works of artists like Woody Allen, but fails to evoke the right amount of charm. The varied cast all give interesting and inoffensive performances, but the dialogue and set pieces leave the show on the border of pretension. It is another of those cases where these twenty somethings live lavish Parisian lives with very little explanation of how they maintain themselves. In this sense The Cosmopolitans verges on being inaccessible to a wide viewership.

Rating: 6/10
Verdict? – Trying too hard in my opinion. Not enthused to carry on watching.

So, out of the five shows put forward by this year’s Amazon Pilot Season, Hand Of God is head and shoulders above the rest in my opinion. It is the only one out of the bunch that made me want to sit and watch the next episode immediately, and I would bet my house on it being given a full season run. Hysteria and Red Oaks come a pretty even second, with the drama mystery just shading ahead in my personal preference. The Cosmopolitans to me seems like a show that has added some French style and upper class scenery to try to disguise the fact that is just another run of the mill romantic comedy, and Really is definitely the worst of the five with very little imagination or attempts to break new ground in the ‘mid-marriage crisis’ genre. Only time will tell, but I predict that perhaps only two of these shows will amount to something more substantial.