When Sin City came out in 2005, the big screen adaptation of Frank Miller’s comic strip received pretty much universal praise. The film was lauded for its impressive and unique visual style, coming as close to the look of a real comic book as any film ever had, but the picture’s revolutionary aesthetic was also backed up by an impressive cast list and engaging group of stories that were gritty, graphic and endlessly entertaining. Fast forward nine whole years and finally we have a sequel in the form of Sin City: A Dame To Kill For, another offering of intense noir stories that weave in and out of the tales told to us in the first film. With many familiar faces and the addition of several well known and well regarded actors in new roles, would A Dame To Kill For be able to match the innovation and spark of Sin City, or would it fall flat as so many sequels often do?

A Dame To Kill For follows very much in the same tone and format as its predecessor, with five segments portraying old and new characters dealing with their bleak struggles in the harsh environment of Basin City. These segments reunite the audience with Nancy (Jessica Alba), Marv (Mickey Rourke), Dwight (now Josh Brolin) and Gail (Rosario Dawson) and introduce us to the likes of Johnny (Joseph Gordon Levitt) and Ava Lord (Eva Green). I won’t go in to much detail for fear of spoilers, but it is safe to say that the narrative throughout is as bleak, gritty and portentous as the sombre tone that was set in the original film. Unfortunately, the almost identical nature of the on screen atmosphere turns out to be detrimental to the film, as A Dame To Kill For seriously lacks any of the freshness and intrigue that Sin City so successfully boasted. Whilst the filmmakers in 2005 could afford to get away with some thinner story telling in favour of the ground breaking visuals, the 2014 team are given no such luxury because of the audience’s familiarity with the aesthetic style. And what one discovers when one looks past the stunning cinematography of the piece is a group of stories that, simply, are not as interesting or engaging as those told in the original film. Where Sin City was filled with a handful of truly memorable set pieces, A Dame To Kill For falls rather flat in terms of action, dialogue and character development. Naturally, the entire pieces looks sensational, and perhaps with nothing to use for comparison I would have felt more kindly, but in truth this sequel is really rather dull. I am not the only one who feels this way, with the film receiving bad to mixed reviews all round, most voicing similar opinions with regard to the lack of innovation and progression from the 2005 original. Ultimately one could argue that the reason for this universal mediocre reception is the timing of the film’s release. With so many fantastic comic book and graphic novel adaptations having been released in the time between 2005 and 2014, there is a definite question of just how much anybody really wanted and anticipated this film. Certainly there was a lasting buzz for a short time after the original picture hit the big screen, but nine years is long time in cinema, and one wonders whether the gritty, overly violent, pretty much humourless noir ship has sailed and been trumped by the much lighter, family orientated, humour filled adventures by comic book heroes like those in The Avengers. 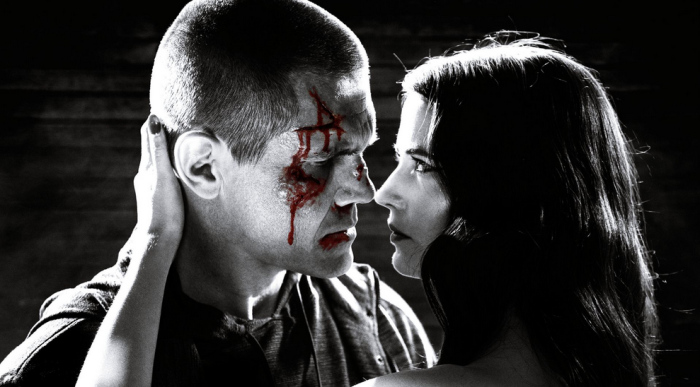 Though the film as a whole is disappointing, there are a number of performances from the large cast that boast impressive and enjoyable moments. Joseph Gordon Levitt, though involved in a rather unsatisfying plot line, gives a pleasingly stereotypical portrayal of a wise cracking, hard staring young noir heartthrob. Levitt’s eyes are always a key factor in his performances, and the black and white, highly stylised aesthetic brings them even further to life. Josh Brolin replaces Clive Owen as Dwight, and gives a much harder, less nuanced performance than his predecessor, though in the gritty environment of the narrative this isn’t necessarily a detrimental change. Further satisfactory performances are given by Jessica Alba, Mickey Rourke and Rosario Dawson, and Bruce Willis makes a brief ghostly appearance that only serves to remind the audience how much better the 2005 film was, but the real star of the show is undoubtedly Eva Green as the titular dame to kill for. Green is absolutely in her element as seductive femme fatal Ava Lord, looking almost as if she were born to exist in the 1940s world of classic noir. Reminiscent of any of the incredible starlets of Hollywood’s golden age, Green consumes ever inch of the screen with her electric presence, I would go so far as to say that the film is worth seeing for her performance alone. It is alarming, however, that this has been the case in a number of recent Eva Green films, most notably 300: Rise Of An Empire. She needs to be careful about getting stuck in a rut of being the best, and sometime only good element of a very bad film. Though it may make her look exquisite in comparison to her on screen peers, it is not a good CV to keep updating.

Overall, Sin City: A Dame To Kill For is a great disappointment. Whilst there may be enough to vaguely satisfy fans of the 2005 original, there is nowhere near enough character developing and universe expanding that is required to make a sequel worthwhile. The visual novelty of the series has well and truly worn off, and with no extra effort aimed in the direction of the narrative, the film turns in to a classic case of style of substance. Unfortunately a style that is no longer as interesting to us as it was nine years ago.