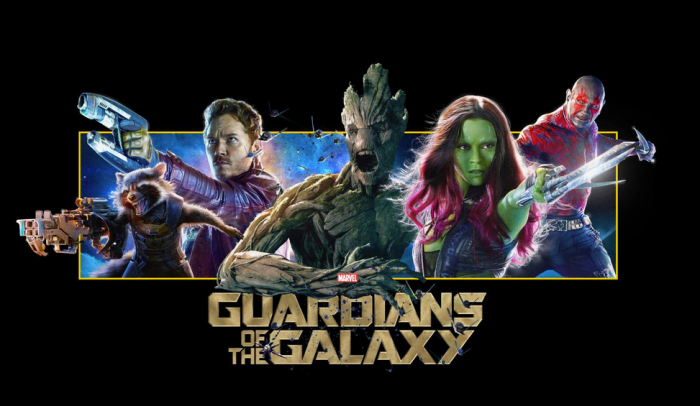 I have a confession to make. I have never, ever, seen a Marvel film. For years I have nodded along in quiet agreement with anybody who preached the wonders of Iron Man, Thor, Captain America, The Avengers and so on, never having seen a single second of any of them. There was something about Marvel’s latest offering, however, that pricked my interest. I had heard nothing but solid praise for the film, with most reviews proclaiming something along the lines of “it’s the best Star Wars movie since Return Of The Jedi“. Being a huge fan of the George Lucas franchise, this teasing tagline was more than enough to get me to break from tradition and lose my Marvel virginity. I went in with all the innocence and fresh faced enthusiasm of a child on their first day of school. Would Guardians Of The Galaxy turn me in to a Marvel maniac?

After the first ten minutes, I knew I was going to love this film. Guardians Of The Galaxy is a nostalgic feeling space movie that equals its awesome aesthetic and action set pieces with laugh out loud humour and a fantastic accompanying soundtrack. A super buffed up Chris Pratt stars as Peter Quill, a human who was abducted by a group of space smugglers as a young boy and is now an accomplished thief throughout the galaxy, collecting items for payment by rich collectors. The plot begins with Peter, self titled Star-Lord, stealing a mysterious orb, only to find that his cargo is much more interesting and sought after than he thought. What commences is a rather formulaic but endlessly enjoyable story arc of good guys versus bad guys, with either side having plans for the potentially galaxy ending orb. What makes the plot stand above other formulaic space films is the brilliant cast of supporting characters who make up Peter’s guardian crew. Along the way, Star-Lord recruits a somewhat ragtag bunch of companions including Gamora (Zoe Saldana), a defected follower of main villain Ronan the Accuser, Drax the Destroyer (Dave Bautista), a strong warrior seeking vengeance for the murder of his wife and child, and Rocket (Bradley Cooper) and Groot (Vin Diesel), a delightful duo consisting of a talking racoon and a tree-like humanoid. The chemistry between these characters produces some of the most enjoyable moments of cinema you are likely to witness this year, keeping an expertly fine balance between story integrity and a subtle satirical knowing and poking fun at themselves. If I were to have any criticism it would be that the villain characters of the piece are wafer thin and pretty much template ‘bad guys’ from any number of science fiction pictures. However, the sheer joy of spending time with the film’s lead characters makes the thin presence of Ronan forgivable. One of the film’s real highlights is its use of classic seventies and eighties songs throughout, and the strange juxtaposition of the old familiar tunes used within a futuristic environment creates a really pleasing feeling of nostalgia, as well as the actual story behind the use of the music rooting a really heartfelt and touching backstory for Peter throughout the narrative. 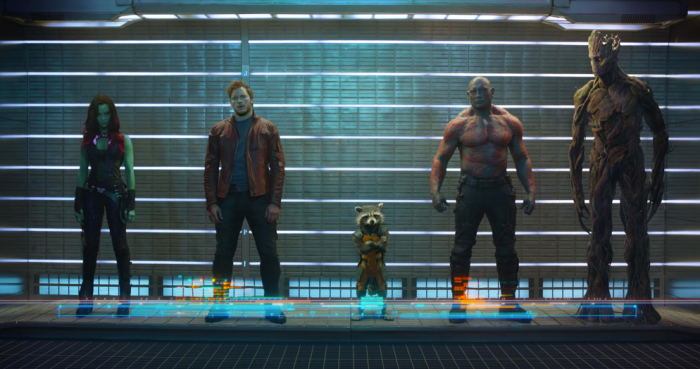 The strength of the characters really does rely on the quality of the cast, and the filmmakers have really excelled in amassing a group of physical and voice performances that elevate Guardians Of The Galaxy above just another genre movie. Chris Pratt as Peter is a stroke of casting genius. It is much more effective, given the tone of the film, to turn a funny man in to an action star than an action star in to a funny man, and that it what they have done. Pratt’s background in TV comedy does wonders for the ease and authenticity of Peter as a character, and with an impressive bodily transformation he fits the brief in terms of both personality and physicality. Zoe Saldana’s Gamora is perhaps a little underdeveloped in terms of story arc, but she has great chemistry with Pratt and the scenes they share together are immensely enjoyable. Dave Bautista as Drax the Destroyer gives one of the best ‘wrestler turned actor’ performances you are likely to see, and great faith was successfully bestowed upon him to portray a the character with the biggest vocabulary in the entire film. The real stars of the show, though, are Bradley Cooper in his voice work as Rocket, and Vin Diesel as Groot (though the actor’s small amount of work has very little to do with the positives in the character). Cooper is full of wise cracks and one liners that give the film a fresh and fast feel at times when it could easily become a touch mediocre, you would never know it was him unless you were to actively seek his name. The character creation of Groot is certain to be the breakout toy and merchandise success this coming Christmas. A tree man with a heart of gold and killer dance moves that is responsible for some of the most touching moments in the film, what more could you possibly want?

Overall, Guardians Of The Galaxy is a high quality escapist science fiction romp that will certainly put a smile on even the most cynical of faces. It is unassuming in its ego and the fun kind of sci-fi that doesn’t isolate viewers like me who have very little knowledge of the mythical aspects or historical canon. There is certainly more room for fuller, richer character development, but Marvel will have the sequels to flesh out the source material. For now, I am happy to bask in the full throttle glory of a space film that takes me back my childhood days of watching Star Wars, The Fifth Element and Galaxy Quest.