As a child growing up in the 1990s, back when wrestling was still the WWF rather than WWE, The Rock was pretty much the coolest person on the planet. Way before I had any idea of who ‘Dwayne Johnson’ was, The Rock was strolling around giving everybody the people’s elbow and generally being a world class bad ass. Move forward to 2001 and Johnson begins a film career that has been noted for its extremely mixed success. From enjoyable turns in films like Fast Five and The Other Guys to excruciating performances in The Tooth Fairy and Doom, he has sometimes found it hard to match his commanding presence to a suitable role. In Brett Ratner’s new retelling of Hercules, I was interested to see if the actor had finally found a character with a pleasing balance of visual presence and interesting character.

I’ll get this off my chest right off the bat, Hercules is terrible. It is not, however, the kind of boring, unenjoyable terrible that I have witnessed in similar films like 300: Rise Of An Empire this year. The filmmakers have decided to twist the legend somewhat in this retelling, keeping an air of secrecy around whether Johnson’s Hercules really is the son of Zeus or simply a strongly built mercenary who travels the land trading force for gold. Accompanied by a varied band of followers, Hercules and the demigod reputation accrued through his supposed completion of the Twelve Labors leads him to Thrace, hired to train its army and defeat the oncoming threat of Rheseus. This is where the story settles and what proceeds is a typical training, fighting, double crossing, obstacle overcoming affair that we are all extremely used to. Whilst the film as a whole offers nothing new or exciting in terms of story telling or action portrayal, there is a certain undeniable quality about it that makes it watchable in a brain switched off, popcorn and snacks sort of way. The most unforgivable fault I found in 300: Rise Of An Empire was the film’s unwavering sense of self importance amidst a completely camp affair, but Hercules, at least, offers a sense of fun and sarcasm at times that helps to offset the clunky mythical retelling. One element that I must admit put a wry smile on my face is the recurring joke of the film’s clairvoyant narrator, blessed with the knowledge of having already seen the details of his death, continually being saved, to his annoyance, by Hercules and his crew. It is this light comedic touch that just about makes the film a bearable experience, they embrace the inevitably camp nature of muscled men in leather thongs and always keep the tone on the right side of contrivance whilst at the same time giving those actions fans in the audience well choreographed fight scenes that do what they say on the tin. 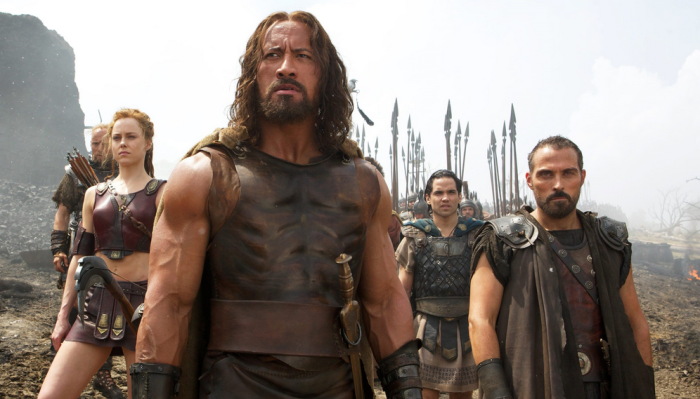 I can’t help but feel that part of my acceptance of Hercules, even though I know it to be a terrible film, is the presence of Dwayne ‘The Rock’ Johnson. It is quite possible that my years of idolising him in the wrestling ring have softened my critical opinion of the man, but I feel that Johnson, though not a great or even rather good actor, has an undeniable charisma and on screen quality that can carry the weight of a role. Being the kind of actor and personality that he is, the casting choice was never going to be hailed as ground breaking or innovative, but Johnson, much like the film’s succinct fight sequences, does what he says on the tin. The body certainly fits the brief, and though his accent switches from American to terrible English back to American throughout the picture, I wasn’t really invested enough in the narrative to care. Some moments of real acting are offered up by the likes of Ian McShane, John Hurt and Rufus Sewell, who take their various roles in the intended stride and keep a fine balance between camp and sincerity. Much like nearly all off Johnson’s films, though, Hercules really is a star vehicle for the big man, who was clearly having fun in the roll, and who am I to begrudge him that?

Overall, Hercules is a film that will never impact negatively on your live should you not get around to seeing it. Conversely, it is not a film that will offend you should you happen to it popping up on your television screen in the future. Those who have a vested interest in the traditional mythology of the subject matter might take exception to elements of the retold narrative, but I was just happy to sit back with my salted popcorn and watch a bit of light hearted nonsense for ninety eight minutes. It certainly doesn’t overstay its welcome and I certainly do not feel aggrieved for having seen it, but my cinematic opinion on the legend of Hercules remains the same… I think I’ll stick to the glorious Disney version.