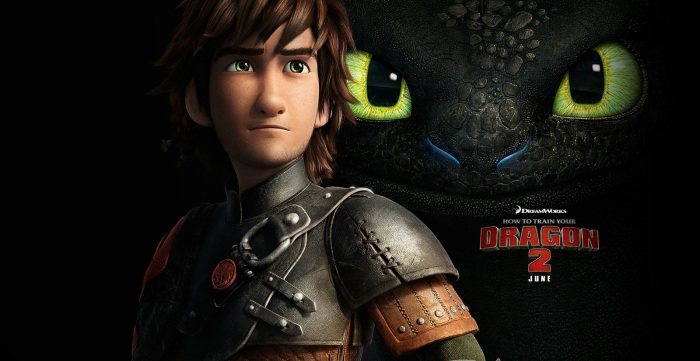 It’s been four long years since we were introduced to Hiccup, the young Viking boy who bucked the trend of his blood thirsty village and befriended the mysterious Night Fury dragon he named Toothless. Together the pair, and the film, became an instant classic, with How To Train Your Dragon, in my mind, joining the ranks of modern animated masterpieces such Wall-E and Up. Thankfully, rather than churning out a sequel within the year, Dreamworks have given How To Train Your Dragon 2 the care and attention it deserves and now the time has come to see if the much anticipated follow up can match the quality of its predecessor.

And I am delighted to report that, in pretty much every aspect, How To Train Your Dragon 2 has excelled itself to equal, if not trump, the original film. The story picks up roughly four years after the first picture left off, with Hiccup now a taller, stubblier, young adult and Toothless just as cute as when we first met him. The narrative revolves around a new threat to the dragons that now live so harmoniously with the citizens of Berk, a dark, mysterious man named Drago Bludvist and his intention to steal every dragon and amass an enormous dragon army. Whilst this plot line is enjoyable and engaging enough, the real magic of the film is in the exemplary way that the filmmakers have respected the conventions of an effective sequel. How To Train Your Dragon 2 does everything that a sequel is supposed to do, and it does it expertly. The film’s universe is expanded, showing the audience new places, new characters, new scenarios without ever feeling like it is treading on well worn ground from the original picture. We are introduced to new characters, all of whom are enjoyable and play vital roles in the narrative, and the characters with whom we are already familiar go through lots of believable progression without ever morphing in to figures that betray how they were in the 2010 original. What struck me the most on reflection is that the film is the first children’s animation for a number of years that does not shy away from the darker themes of life that serve films like The Lion King and Bambi so well. I am not ashamed to admit that I cried on more than one occasion, and the brave decisions taken with regards to certain elements of the plot only help to cement the film’s status as one of the very best and most emotionally engaging animations in the last five years. The filmmakers appear to have mastered the art of creating an ‘epic’ film without it being overlong, overloud, and overloaded with various explosions, something that Michael Bay has unfortunately never been able to master. The epic status of How To Train Your Dragon 2, rather than being in the effects (though they are stunning), lays in the emotional investment the audience puts in to the characters, and in the heartfelt and endearing character arcs that we witness on screen.

It is always difficult to talk about the cast when it’s only their voices you hear throughout the film, but the star studded team including Jay Baruchel as Hiccup, Gerard Butler as his father Stoick and America Ferrera as Hiccup’s girlfriend Astrid all reprise their energy filled performances to great effect. Craig Ferguson as Stoick’s sidekick Gobber brings much of the enjoyable humour and double entendre that will keep unwilling parents happy for the duration, and Game Of Thrones star Kit Harrington has a minor role as beefy heartthrob Eret, type cast even in animation! The most important and impressive new character comes in the form of Cate Blanchett as Hiccup’s long lost mother Valka. The character’s maternal presence brings a whole new element to the film that was not present in the original, and helps to incorporate the theme of familial love in an even stronger way than the films predecessor did. The real hard work to give credible life to these voice performances, though, goes fully to the animators, who have done a wonderful job of replicating the familiar tone of the first whilst at the same time elevating the aesthetic to an even more modern level. I don’t really know how to put it other than, at times, the intricate close detail of the dragons faces make them look, well, real. And though I did not see the film in 3D, just a personal choice, I have been told that the simulated feeling of flying that is created is just as strong as it was in the original How To Train Your Dragon.

Overall, How To Train Your Dragon 2 is one of the best films I have seen this year so far. As a twenty-four year old, you know you are on to a winner when a brand new animated feature conjures up false feelings of nostalgia similar to those one experiences when watching life affecting films from their childhood such as The Land Before Time or The Lion King. Though it may not cause such universal hysteria as any new Pixar release, I can guarantee that the film is better in terms of quality and emotional draw as anything that Disney/Pixar have released in the last five years. An absolute must see.