It feels like a million years ago that I watched John Singleton’s 1991 crime drama classic Boyz N The Hood. At the time of the film’s release, rapper Ice Cube was a member of N.W.A, arguably the greatest hip-hop group of all time, and gave a performance equal to any of the picture’s more established actors like Cuba Gooding Jr. or Laurence Fishburne. He followed this success with the 1995 stoner comedy Friday, which though not receiving such widespread acclaim, remains one of my favourites and showcased Ice Cube’s ability to play both drama and comedy on the big screen. Since the nineties, sadly, the man whose real name is O’Shea Jackson has participated in a string of underwhelming projects ranging from the Barbershop series to Janky Promoters, leading an entire younger generation to see Ice Cube not as one of the seminal founders of gangsta rap and occasional contributor to films of merit, but rather as the type cast, one dimensional hard man of numerous awful films in the twenty first century. Being a committed fan of his early music and early filmography, I made the trip to see Ride Along, hoping for the best but fearing the worst.

Ice Cube stars as James Payton, an Atlanta police detective who decides to take his prospective brother-in-law Ben Barber (Kevin Hart) on a day long ride along in an attempt to both put him off joining the police academy and convince his sister that Ben is an incapable fool who is not worthy of her hand in marriage. Ben, a high school security guard, is shown to be an avid video game player and all around clown, and what proceeds this initial set up is ninety minutes of cliched and repetitive high jinx between the two men in their quest to come to terms with each other and solve a long outstanding crime along the way. Ride Along’s fundamental flaw is that is it simply not funny, or at least not funny enough. I can recall perhaps two incidents that made me smile and exactly one occasion at which I verbally chuckled, but on the whole the film offers absolutely nothing in terms of originality or freshness. The picture is clearly intended to be carried by the presence of its two leading actors, with a vague subplot about Serbians and military grade weapons hardly making a dent in the audience’s consciousness. The problem with this is the fact that after the first set piece involving the pair leaves us underwhelmed, the next four or five unfold in exactly the same manner and the narrative turns in to a boring, repetitive crawl to the finish line. 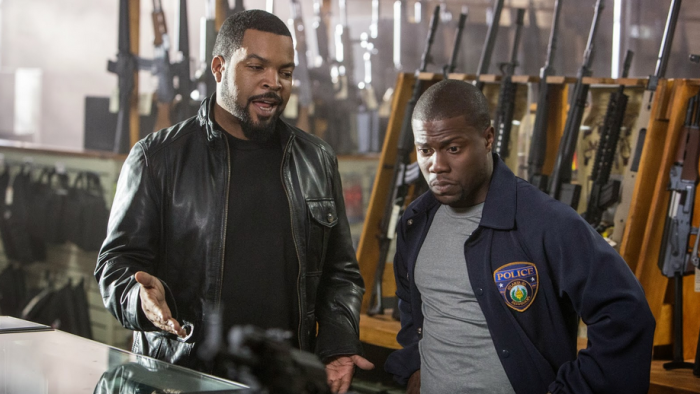 Regardless of mine and most other critic’s objections, Ride Along has become a commercial success, amassing in the U.S. the highest January opening gross of any film since 2008’s Cloverfield, a feat one can only assume was achieved thanks to the strong fanbases of its two stars. Performance wise, Ice Cube is limited to playing the straight man, and a moody, mean ultimately rather dull one at that. The character of James is one that not many viewers will find an affinity with, as he remains stoic and unresponsive throughout the majority of the narrative, and his eventual (and inevitable) change of heart occurs with so little fanfare that one wonders what the point was in the first place. Kevin Hart is perhaps most well known for his stand-up comedy, of which I am also a big fan, but he fails to translate the vibrancy of his real-life on stage presence to the role of Ben Barber. Hart displays the same sort of high energy, fast joking approach that Eddie Murphy employs so effectively as Donkey in the Shrek series, the unfortunate difference being that whilst Murphy is mostly hilarious, Hart’s quips fall flat at a disappointing rate, rendering the incessant nature of his character more annoying than enjoyable. As a pair, they are far from the most unbearable screen duo I have had to witness, but any potential the two have of producing something worthwhile is ruined by the pedestrian plot and the totally unoriginal dialogue (some of which, I imagine, was improvised and therefore cannot be solely blamed on the writers).

Overall, Ride Along is a throw away buddy-cop comedy that is easily forgotten. Both Ice Cube and Kevin Hart are clearly having fun together, but their fun does not extend to the audience who have seen it all before, and done much better in many, many other films. Having said that, the picture clearly found an audience and its gross figures, though not necessarily correlating with the quality of the film, prove that star power and star vehicles are still doing big business. My advice? Experience the full potential and real talent of Ice Cube by watching Boyz N The Hood, and spend some time with a much funnier incarnation of Kevin Hart by enjoying one of his many stand-up specials, my personal favourite is 2010’s Seriously Funny.