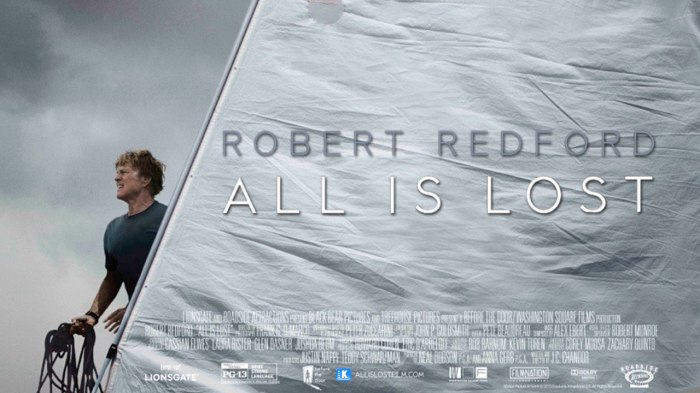 Showing that he can handle a wide range when it comes to cinematic content, second time director J. C. Chandon moves from the Wall Street offices of 2011’s Margin Call to the wide expanse of the big blue in one man survival drama All Is Lost. The one man in question is Robert Redford, starring as an unnamed yachtsman whose boat becomes a countdown to disaster when it is struck by a wayward shipping container somewhere in the midst of the Indian Ocean. The ensuing one hundred minutes consists of Redford’s John Doe confronting his impending doom in all of the ways we as cinema goers have become accustomed, with the picture becoming a familiar mix of The Perfect Storm, Cast Away and at times Gravity. The only difference being, however, that I enjoyed those three much, much more.

All Is Lost is one of those films that attempts to exhaust the audience by throwing one problem after another at its protagonist, but the vague and ambiguous way in which these obstacles are subsequently approached left me feeling rather ambivalent toward the whole affair. Many of the set pieces involving Redford’s character and his endeavours to save his doomed yacht are, to put it simply, too ‘samey’. They may be authentic procedures that must take place in order to stabilise a sinking vessel, but in a cinematic sense there are only so many times I can watch a man wade into water, pull out yet another tarpaulin sheet and climb a pole before I start to get restless. This repetitive tone, whilst signifying the lack of a change in fortune for Mr. No Name, becomes rather dull rather quickly, and thirty minutes of the film passes without much interest at all. It is when we are given a change of scenery that the picture’s pace and intensity begin to increase. Mr. No Name, admitting defeat and releasing his dear boat to the depths of the ocean, is forced to take shelter in his inflatable life raft and it is at this point that many of the picture’s finer moments come to the fore. Director Chandor’s choice of techniques, shots and angles whilst inside the raft really display the claustrophobia and disorientation that being lost at sea in, what is effectively a sinking tent, must produce. In particular, his fondness for wide shots from underneath the raft, exposing the sharks and the endless expanse of ocean that lie in wait for Mr. No Name should he fall, evoke the sheer panic and terror of the situation. Accompanying the solid direction is a score that swells when it needs to but is never over imposing or manipulative, and I see this morning that composer Alex Ebert has deservedly been recognised for his work and nominated for a BAFTA award.

Whilst I may have problems with the film as a whole, there is no denying that is it a special achievement for Robert Redford. The man is a physical marvel at seventy seven, throwing himself in to stunts that the fittest of Hollywood’s crop would be winded by. The fact that one cares whether his character lives or dies is testament to his performance alone, as the audience is provided with absolutely no back story, something that the makers of Gravity could, and should, have been brave enough to do instead of incorporating a rather cynically wedged in personal life for Sandra Bullock. We do not know his name, we do not know where he has come from or why he is there, and perhaps most strikingly of all, we do not hear him speak. Bar a forty four word voice over at the very beginning of the film, All Is Lost plays out like a voyeuristic intrusion, the camera simply following a man who is all alone, trying to save his own life. It seems a ground breaking choice to make, but of course he wouldn’t talk, give or take the odd exasperated expletive. The lack of dialogue may be off-putting to some, but having seen the film I can say that nothing is lost through Redford’s silence, in fact it opens up a plethora of other ways in which he has to communicate and connect with the audience. His use of facial expression and body language is at times totally captivating, one of the most silently emotive performances I have seen since The Artist.

Ultimately, Robert Redford is to be rightly applauded and nominated for his impressive solo performance, but All Is Lost, overall, is a film about morality and staring in to the abyss that never really scratches beneath the surface. No matter how enjoyable an acting class from its only character,  the finished product does not manage to live up to the enormity of its themes and in parts is, unfortunately, a grind. If I want emotionally exhausting ocean tragedy, I’ll watch The Perfect Storm, if I want nerve shredding solo survival, I’ll watch Gravity, and if I want an equally strong leading performance in a film of greater quality, I’ll watch Captain Phillips.