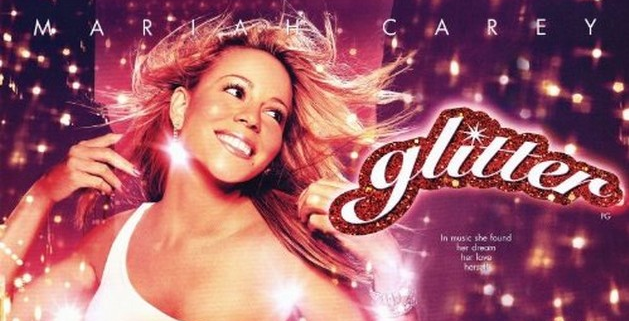 Let me get one thing straight, I love Mariah Carey. I am partial to a diva and in my formative years they didn’t come much bigger than she. ‘Hero’ is one of my top five go to shower songs, and I have been known to listen to Miss Carey’s version of Hark! The Herald Angels Sing in the month of August. It was with this enthusiasm that I sat down to complete my third episode of The Second Chance Saloon project, in which I masochistically make my way through IMDB.com’s worst one hundred films of all time and retrieve any redeeming features I can from the cesspit of cinema. Today was the turn of Carey’s 2001 star vehicle Glitter, ranking at number thirty four in the list and perhaps one of the most infamous flops of the last twenty years. Surely one bad mistake wouldn’t be able to undo twenty three years of devoted fandom on my behalf. Or would it?

In light of the bigger picture the answer is no, but make no mistake, everybody involved in the making of Glitter did a bloody good job of trying to turn me against Mariah Carey. The film is nothing more than a generic, off the shelf rags to riches tale of a girl with an alcoholic mother and a big voice with big dreams to boot. Carey, of course, plays our heroine Billie Frank, except the main problem is that she isn’t playing anything at all. I am not exaggerating when I say that the majority of the film looks like interlude scenes that could be inserted in to one of the singer’s real life music videos. Not for a single second did it seem as though I was watching a character in a fictional setting. I was constantly aware that I was watching Mariah Carey rather badly reciting lines that were so cliche I’m not surprised she failed to create a believable on screen personality. I feel I must stick up for the wounded superstar at this point and state that her acting ability has certainly improved since this film came to be, the evidence being her quite unrecognisable, understated and underrated cameo in Lee Daniel’s 2009 Academy Award winning drama Precious. In a small supporting role (it must be said, in much better film) Carey was able to do justice to the script and to the character, but here she simply did not have the strength or depth to carry the weight of an entire motion picture on her shoulders.

The weight of the picture was not relieved, unfortunately, by any of her woeful costars, the main culprit being on screen love interest Julian Dice played by Max Beesley. Apart from adding a certain aesthetic pleasure, Beesley fails to create any chemistry with his leading lady and is responsible for one of the most cringe worthy nineteen thirties New York accents I’ve heard for a long time. Was a Manchester born lad really the best choice for the role? I fear rather that he may have been the only choice. The rest of the supporting cast generally follow suit in underwhelming the audience, but a special shout out must be given to Terrence Howard of proper actor fame. His performance as a sinister record producer come gangster, whilst being cliched and cheesy as hell, still shines bright over the rest of the putrid pack, his talent being easy to see even through this mist of garbage.

I must pay Glitter its dues at this point and confess that the conclusion of the plot caught me off guard, something that many better films than this have not managed to do. This successful shock, however, could be put down to the fact that I didn’t care enough about the story to invest in guessing its outcome. The film serves as a masterclass in how to make sure the viewer doesn’t care about a single character by not spending enough time, or should I say not using the time they have well enough, attempting to create a bond between Billie, Dice and the audience. At just over one hundred minutes in length, one would have thought that that would provide plenty of time to persuade me to form an attachment, but no, sorry, not a single fuck was given.

So there you have it. Glitter is, to put it mildly, a terrible film. Miss Carey doesn’t strike me as a particularly unintelligent person, she will have known that this film was going to be awful. Anybody who has read this blog before will know of my penchant for musicals, and Glitter has committed the cardinal sin of the genre by not producing a single memorable song. That, for me, is a deal breaker. My love for Mariah in the world of music still burns bright, and my respect for her turn in Precious lies intact, but tonight, for one hour and forty minutes, we were nearly not friends.