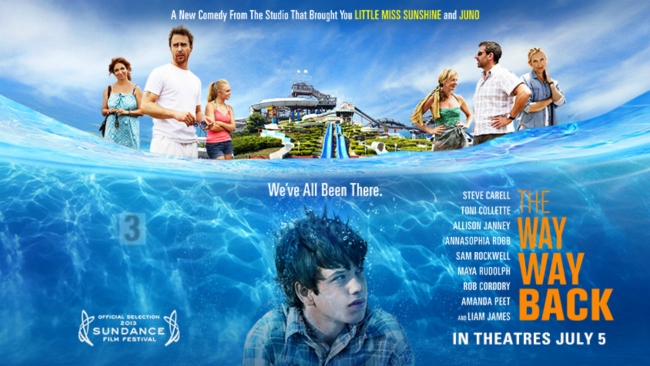 The Way, Way Back is everything that you would expect a Fox Searchlight picture to be. We’ve got melancholy teenagers, obscure yet fitting accompanying musical choices, quirky characters left right and centre, but most importantly a reliable cast and on the whole an enjoyable film. The picture details the coming of age of Duncan (Liam James) as he is forced to spend the summer at a beach house with his mother Pam (Toni Collette), her new boyfriend Trent (Steve Carrell) and his narcissist daughter Steph (Zoe Levin). These three characters are immediately unlikable, Steph for being a snarky snark, Trent for telling Duncan he is a “three out of ten” and Pam for letting him get away with it. Thank god, then, for next door neighbour Betty, a perpetual drunk and merciless gossip. Played exquisitely by one of my personal favourites, Allison Janney, she breathes some much needed life in to what in truth is a pretty flat first twenty five or so minutes. The film spends too much time establishing the fact that Duncan is unhappy with his mother’s romantic choice, and his life in general, and the audience are treated to one too many sighs and distant stares for my liking. It is when our protagonist finds himself at the gates of a water park that The Way, Way Back starts to come in to it’s own.

The micro-evironment of Water Wizz park is where the story operates at its best. Here Duncan is released from his melancholic shackles and becomes a character that the audience actually get to like. He is joined by a cast of quirks including Maya Rudolph and Sam Rockwell, the former being criminally underused whilst the latter, playing a character who is funny but borders on grating more than once, could have been tamed a touch or two to become a little more believable. Rockwell, nonetheless, as park owner Owen, provides the big brother/father role that Duncan needs to come out of his shell and escape the tedium of the beach house life that is fast unravelling due to Trent and his failure to stick to just one woman. 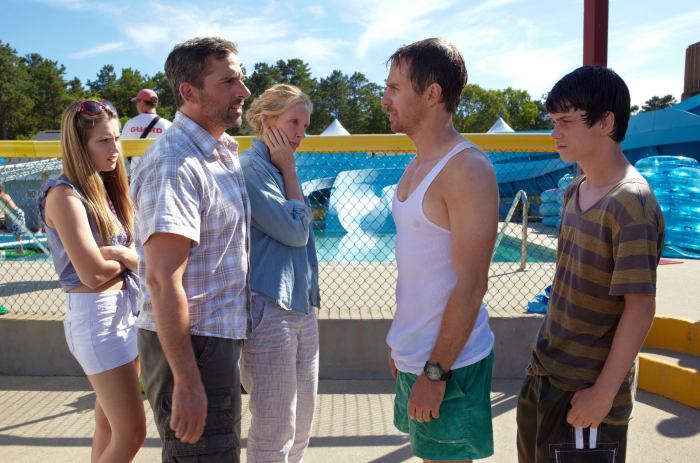 On that note, Carrell does a surprisingly impressive job of playing a pretty sinister and severely unlikable guy. It is probably the most restrained role I’ve seen him play and it suits him. Toni Collette does her job, having to do not much else but act pathetic for two hours, and the multitude of young actors in the film all turn in solid performances. It really is Allison Janney, though, that deserves the plaudits for her scene stealing. She can’t be on screen for more than fifteen minutes in total, but she can chew the scenery with the best of them, and her lines are the only ones you will remember when the credits begin to roll.

The poster likens the film to both Little Miss Sunshine and Juno, one of which I liked and the other of which I did not. Fortunately, The Way, Way Back has none of the borderline pretentious and preachy dialogue of Diablo Cody’s Juno, but bears more than a striking resemblance to the upbeat, unassuming and understated family warmness of Little Miss Sunshine. For that, it gets a three and half out of five, a pat on the back, and another round of applause for Allison Janney.